The Yankees beat the Mets handily by a 9-1 tally last night. CC Sabathia was perfect through four before giving up a solo homer to Gary Sheffield leading off the fifth for the Mets’ only run of the game. After two more singles that inning, one of which didn’t leave the infield, he was perfect in the sixth and seventh as well. Sabathia showed no lingering effects of the sore bicep that bounced him from his last start, striking out eight against no walks.

While Sabathia was in the game, the Yanks sat tight with the four runs they picked up against Mike Pelfrey in the top of the second. That inning got started when Melky hit a tapper toward third base that David Wright charged and threw past Nick Evans at first base, allowing Melky to go to second on the error. After Francisco Cervelli struck out, Ramiro Peña shot a double over Wright toward the left-field line that plated Melky. CC Sabathia then singled up the middle, plating Peña. Brett Gardner, who led off the game with a single, hit a blooper to shallow left to move the lumbering Sabathia to second. Johnny Damon then hit a would-be double play ball to short, but Alex Cora side-armed his throw and flinged the ball into shallow right sending CC home, Gardner to third, and Damon to second. Mark Teixeira then grounded to Evans at first, but Evans flat-out dropped the ball as he went to step on the bag allowing the hustling Teixeira to reach and Gardner to score.

For those not keeping track, that was four runs on three errors and just three balls hit out of the infield, none which got past the outfielders. Wright’s error was on a tough play, but Cora’s was inexcusable, and Evans’ was something out of The Bad News Bears, as was the entire inning by that point.

Later, in the top of the eighth, reliever Rob Parnell balked Robinson Cano to second by dropping the ball as he brought his hands together before his windup, then sent him to third on a wild pitch. Cano didn’t score, but he didn’t have to. Elmer Dessens had already inflated the score to 7-1 by giving up Brett Gardner’s third major league homer, walking Teixeira, then giving up an opposite-field bomb to the rejuvinated Alex Rodriguez (who also walked three times in the game). It was that kind of game for the Mets, but then what else could they expect from running out the 38-year-old Dessens. 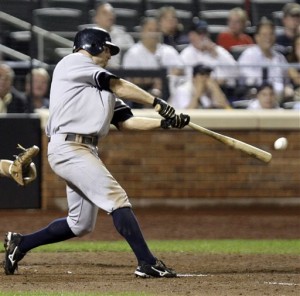 In the ninth, Gardner, who was moved to leadoff spot at the last minute when Derek Jeter was scratched due to the flu, capped off a five-hit night with an RBI triple, then scored on Johnny Damon’s subsequent double. Gardner’s now hitting .303/.374/.441 on the season.

So much for the team-wide hitting slump. Since averaging three runs per game against the Nationals and Marlins and being shutout in their first game in Atlanta, the Yankees have scored 28 runs in three games. Alex Rodriguez is 5-for-10 with two homers, eight RBIs, five walks, and just one strikeout since getting his overdue days off. With Gardner and Peña going a combined 8-for-11, the Yankees scored nine runs last night without Jeter, Jorge Posada (who got the night off after Thursday night’s marathon in Hotlanta), or a DH.

Special bonus factoid: in their three wins against the Mets this season, the Yankees have scored 33 runs, four of which have been unearned.

Damn, Gardner is looking like a major leaguer. Add in his 17 steals, and (big) if he keeps it up, he's in the running for ROY. I wonder if Girardi would ever consider dropping the whole lineup to put Gardner at the top.

[3] He needs to steal more, running every chance he can the way Henderson used to. Keep those hurlers distracted! He's got the kind of speed such that he doesn't need a perfect jump every time, even stealing third.

It's kind of difficult to do that if Sabathia gets on base in front of him though...

Serves Mets fans right mock-cheering Castillo on popups! Now they can mock-cheer just about everyone!

If I were a Mets fan, I really don't think I'd be chanting "Steroids" during A-Rod's Ab's while Sheffield is on my team's roster!

I like it when A-Rod looks at a lot of pitches and doesn't swing at them. Didn't realize that he passed Reggie on the all time homer list. Sorry Reggie. A-Rod hit with two outs, too. Like that also.

While Gardner's doing really well and I hope it continues, it seems to me that Girardi had Cabrera on a shorter leash than Gardner.

[4] I think part of the reason his % is so high is that he goes only when he feels like he can understand the pitcher's move. That's why he doesn't go more often.
I also figure once he's played around the league a little more, he'll get a good sense of the pitchers and he'll snatch a bunch more.

[7] they'll also get to know him. he steals at a very high clip so i'm not too concerned about him stealing more.

"Some legs are trouble, some legs have pace
Gardner's get legs that will run all over the place"
I was definitely one of the Gardner haters. His swing at the beginning of the year simply looked pathetic. No wear near Major Leage ready. It's good to see him finding a groove. When he leads off like last night and gets on, I am admittedly disappointed when he does not run on the f irst pitch or two.

[7] I completely agree with his inexperience with major league pitchers’ motions leading to his tentativeness on the paths, RYI. I just wish he'd err on the side of aggressiveness because he has enough raw speed, blown pickoff calls or otherwise notwithstanding. Aggressive base running forces the defense to make perfect plays given his tremendous speed. Most of these guys aren’t that good to make those perfect plays all of the time because of the “rush factor” (2112 references aside), which such speed promotes (see also infielders hurrying on grounders only to bobble or wildly throw, not to mention the pitchers’ command decreasing because their delivery timing is disrupted).

Tentative base stealing doesn’t distract pitchers as much either. I mean is there anyone with the big club who can teach that, unless they bring in Henderson during ST as a Special Instructor? I would do that next year if I were Cashman, if only to work with Gardy, Pena, and Cervelli. However I would argue he would have a lot to teach everyone. I will give Gardner credit for being more confident however, which is probably the single largest factor for stealing bases. You can have all of the speed in the world, but without confidence bordering on arrogance, you are “scared money” and tentative.

Turning walks, singles, doubles and reaching on errors into triples is what made those Henderson/Mattingly/Winfield Yankees teams put at least one on the board just about every first inning, specifically in 1985, when he scored 146 runs in 143 games. At least it sure seemed that way back then. When Rickey was tired or his jersey was snug that day, he would simply hit one out with a jersey pop or three! Gardy doesn’t have that in his game yet...

I always loved that "Countdown to Launch" footage of "The Man of Steal!"

Cabrera on a shorter leash

Only because he has no outstanding tools. Gardner's speed alone changes the game. Melky does a lot decently but nothing outstandingly - a better fourth than a starter especially where the fourth on this team will get 400 ABs.

Gardner probably should steal more and I think he will as he gets more adjusted. And it's how he'll stay a major leaguer too so long as his OBP is north of .350. They could get four years of high value innings from him.

I feel bad for Cabrera I guess.

I'm loving Brett Gardner right now. He has a 113 OPS+ ... He's got 17 walks and only 21 Strikeouts in 176 plate appearances, which is a good ratio. AND, he can steal bags with the best in the game. I don't know if he can keep up that OPS+, most of it is tied to his on-base percentage which is perfectly fine with me, but he's earned a shot. And platooning him with Melky in center (and occasionally putting Melky in right) seems to be working.

More than anything I have NEVER seen anyone get down the line to first faster than Brett Gardner. And I mean in my whole life I've never seen anyone that fast. I thought he was fast on TV, but then I saw him live and he absolutely booked down the line in the first inning Thursday night in Hotlanta.

Meanwhile, "the great-amazing-wonderful-second-coming-of-Ted-Williams-or-Yaz-or-at- least-Mike-Greenwell-or-Dewey-Evans" Jacoby Ellsbury has a 92 OPS+ in 303 plate appearances, to go with his career 94 OPS+...

I'd love it if Gardner actually turns out to be very good, but it seems like a lot of his hits are weakly hit 'tweeners, bloops, etc. I just get the feeling he's had a lot of luck recently.

And good lord his swing is still awful to behold.

[13] i can attest to that. it was completely INSANE how freaking fast Gritner got down the line. i watched him do pre-game sprints and he just exploded past whatever running partner he had. he's got many extra gears and they begin with the very first step. it was amazing how close the plays were when he just grounded to 2nd base. wow.

RI - travel safely and enjoy Scotland!!! i played there about 3 years ago. beautiful country!

wow, both Bruce Chen and Eric Milton are starting pitchers today. oh, and Pujols now has 27 homers on June 27th...