The Yanks are hoping to avoid a split with the lowly A’s today as they send Sergio Mitre back to the mound. Mitre lasted 5 2/3 innings in his first Yankee start, allowing four runs (one of them unearned) on eight hits and a walk while striking out four. The lone walk was encouraging, as was the fact that Mitre got nine groundouts against just four fly outs. Still, with Chien-Ming Wang’s prognosis looking bleak, Mitre will have to do still better tonight to continue to quell the calls for Phil Hughes to be converted back to starting. Alex Rodriguez gets the day off today. Cody Ransom’s at third. Jorge Posada is hitting cleanup. Despite Brett Gardner’s big RBI triple yesterday, Melky Cabrera’s back in center.

It’s fitting that the Yankees and A’s are playing today as Rickey Henderson, who spent four and a half of his prime years as a New York Yankee, enters the Hall of Fame wearing an A’s cap. Having come of age as a fan during Rickey’s Yankee heyday, Rickey holds a special place in my baseball heart, and seeing the green and gold flash against those midnight blue pinstripes will keep those memories flooding back. 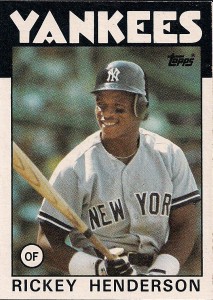 The Yankees and A’s have a long history of sharing great players, dating back to Hall of Famer Frank “Home Run” Baker, who hit exactly half of his career homers with each team. In the late 1950s and early 1960s, the Kansas City Athletics often appeared to be little more than a farm team for the great Yankee teams of that era, with Roger Maris being the cream of the Kansas City crop to flower in the Bronx. Then, of course, there was Catfish and Reggie, two of the three Hall of Famers from the early ’70s Oakland dynasty, who were also key players on the back-to-back Yankee Championship teams in the latter half of the decade.

When Rickey set the all-time single season stolen base record in 1982, it was at the urging and ever-present green light of A’s manager Billy Martin, who himself had been banished to the old KC A’s following the infamous Copacabana incident in 1957 and would be back managing the Yankees in 1983. Billy managed Rickey on the Yankees to one of Rickey’s greatest seasons in 1985. More recently, Jason Giambi, who won an AL MVP with Oakland, placed his name among the Yankee franchise leaders in home runs (tenth), slugging* (seventh), and on-base percentage* (fifth).

With Giambi on the DL after having returned to the A’s this year, the top cross-team names in today’s game are Yankee right fielder Nick Swisher, who was part of Billy Beane’s famous Moneyball draft, Oakland manger Bob Geren, a former Yankee catcher from the dark days of the early ’90s, and A’s reliever Russ Springer, who made his major league debut as a Yankee the year after Geren was waived and is old enough to have been traded with J.T. Snow for Jim Abbott.

And since that stream of consciousness took us a considerable distance from the Hall of Fame, here’s a top-10 list of Hall of Fame classes that I assembled for SI.com. Yankees and A’s abound there as well.