Where's The Party At? 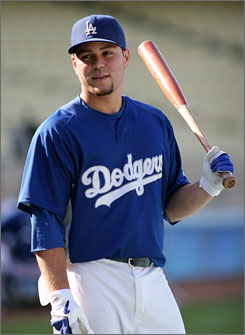 Russell Martin, who may be doing quite a bit of catching for the Yanks this year, is skirting the subject, in fairly vague terms, of his disappointing last few seasons. From Canada’s National Post:

Russell Martin says he knows why he has skidded from stardom to mediocrity in the prime of his career.

But beyond vague allusions to “frustrations” and “distractions,” he politely declines to explain.

“There’s some things that you keep for yourself,” Martin said. “Those distractions, they’re personal — personal issues in my life that not everybody needs to know about.” …

…His performance faded during the past two seasons. By his standards, he says, he got lazy.

“I had some distractions that maybe led me not to have that same drive that I’ve had in the past,” he said. “Really, that’s all it is, honestly. I didn’t train quite as–I trained hard, but before, nobody trained as hard as I did.”

Martin made similar comments in the beginning of the 2009 season – though that’s not quite what he told the LA Times last month; it’s more or less common knowledge that Martin liked the LA nightlife quite a bit, possibly to the detriment of his on-field performance. On the one hand, it’s refreshing to see him (sort of) acknowledge it, and if Martin has actually figured out how to focus now, than that’s encouraging – better to think he has some issues he may be able to correct than that he’s simply not a very good ballplayer anymore. On the other hand, he said similar things in 2009 and doesn’t seem to have made much progress since then — and New York is not known for its lack of distractions. Like many of you I hesitate to evaluate a player based on things like this that can’t really be measured, but the Yankees would’ve been naive not to at least take this into consideration. Presumably they’re not too concerned.

Martin’s had an interesting life, or at least an unusual one by baseball player standards; he grew up in Quebec, where his mother was an actress and singer, and his father played the saxophone in subway stations to earn money for Martin’s baseball gear and training. He was poised for superstardom when he first came up, which is why so many more people have heard of him than his stat line would suggest, and few people in that time span have disappointed Dodgers fans more.

New York has a long tradition of great players who can stay out boozing and courting all night and still kick ass the next day – Babe Ruth, of course; Mickey Mantle, for many years; most recently, David Wells threw a perfect game while still tipsy from the previous evening. I love players like that, who do everything wrong and then perform anyway. But of course that kind of thing will catch up with most people sooner or later — and apparently caught up with Martin on the “sooner” side.

It doesn’t have to be all or nothing. Derek Jeter and Alex Rodriguez certainly seem like they’ve enjoyed the entertainment options New York offers, so to speak, but I’ve never gotten the sense that either of them is a big drinker and certainly they both take care of themselves and come ready to play. Martin will be surrounded by stars and veterans in the New York clubhouse and perhaps a few of them can take him under their wing; I imagine that at the very least, if  Jorge Posada feels Martin is not playing his best, he will club him unconscious with his own bat.

I'm officially going to give him a pass on whatever happened in LA and start off with a fresh perspective. I don't care what any of these guys do off the field, as long as it doesn't embarrass the team or impact their play. It seems the Yankees have a pretty low tolerance for players who are lazy or ill prepared to play, so hopefully he'll be a model citizen and get his game back. A reputation for vague off field issues affecting your game isn't something any ballplayer wants, so hopefully he's just not saying the right words.

My worry is that the Yankees just signed a catcher coming off hip surgery. You'd sorta think a hip is a critical body part for a catcher. "She's a fine car, but I just had to replace her transmission. Otherwise, she's fine. Just fine".