When a Tree Falls 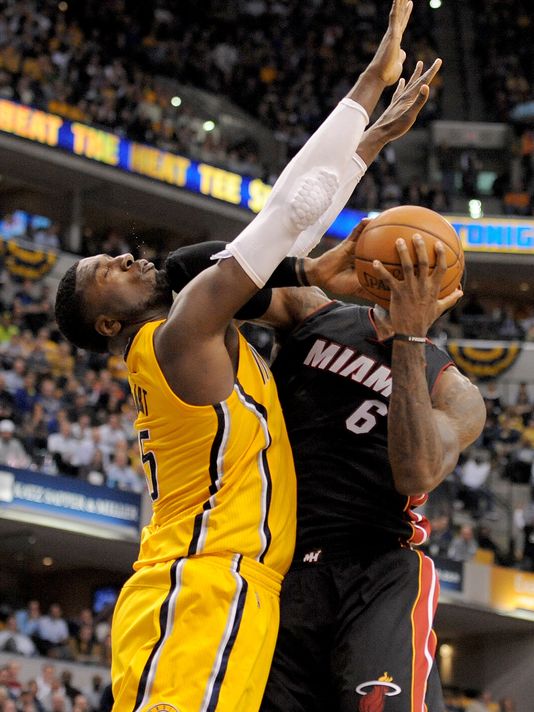 On March 26th, the Miami Heat and the Indiana Pacers clashed in their ongoing battle for the first seed in the Eastern Conference playoffs and the home-court advantage that comes with it. Indiana was not letting Lebron James get near the basket unmolested, and the officials didn’t see anything wrong with the extra attention beyond the nominal foul call here and there.

Lebron James, perhaps frustrated by a perceived lack of protection from the refs, rushed the basket in the fourth quarter with intent to make contact with whatever got in his way. Specifically, Roy Hibbert’s head got in the way. Lebron’s elbow felled the big fella. Hibbert crashed to the floor, attempted to get up, and promptly crashed down again.

Hibbert went to the locker room after the fall, but, by rule, was forced to re-emerge to take the foul shots resulting from Lebron’s flagrant. (The rule, Jeff Van Gundy instructed, was that Hibbert had to take the free throws or else he would be unable to return to the game.)

A few days later, April 2nd, he fell to the floor after a flagrant foul from Charlie Villanueva. He went to the locker room, receiving attention to his head and neck. He returned to that game as well.

Up to March 26th, Roy Hibbert had played in every Pacer game of the season. He shot .459 from the field, grabbed 7 rebounds and scored 11.3 points in his 30 minutes per night. Though not the most efficient big man around, this year’s numbers were in line with a career shooting percentage of .473 over 295 games through last year.

Indiana did win the coveted first seed and home-court advantage, but they now face elimination by the lowly Hawks. Hibbert’s play has been so putrid, many have taken notice. Other pundits have gone so far to say his career may be over. Here’s one of many things Bill Simmons noted about Hibbert’s recent decline:

The Law of Mutombo tells us this: You never know when a tall center is about to lose it, but when they lose it, you know right away. Artis Gilmore gained the nickname “Rigor Artis” in the mid-’80s. Shaq turned into Mummified Shaq somewhere between Phoenix and Cleveland. Dikembe was kicking ass and wagging fingers right until the 2001 Finals, when Shaq turned him into a lumbering, uncoordinated, elbow-laden mass of uselessness. Even if Hibbert is only 27, what if this wasn’t a slump? What if the Law of Mutombo struck him early?

It’s been reported that Hibbert passed concussion tests on both March 26th and April 2nd. Still, statistcal collapse such as Hibbert’s demands that we consider the possibility of severe and sustaining injury. It appears further investigation to his condition is warranted – whether the man is jacked up or not, he’s playing jacked up.

Interesting post, J. I don't follow enough hoops coverage to know if the injury has been completely overlooked. But it sure does seem to make sense because he really has fallen off.

Another thing Simmons notes is that he's not passing the eye-ball test. He's nowhere near the rim to contest shots he was contesting all season long. This is a guy on the short list for defensive player of the year and is now a defenisve liability.

Very inciteful. I've followed Hibbard since his Georgetown days, and have been unable to understand how this really excellent player has seen such a marked decrease in performance. And there has been little said about this in the media (at least none in this area, which tends to follow ex-Hoyas closely).

I don't know if I've ever seen a player (not to mention an entire team) fall off a cliff this dramatically and this QUICKLY. It's shocking to see. They still have a shot in this series simply because I don't trust Atlanta enough to close it out, but good Lord this is like the NBA equivalent of the 2007 Mets or something.

Also, I'm not going to say I've been calling the inevitable Lance Stephenson implosion for a year. But, well...

I agree, I don't know if Atlanta can close them out. But if the Pacers don't get it together to win this series, man, that'll be some kind of collapse.

My friend out in Chicago says the Radio types are saying Hibbert is upset by the personnel decisions and is emotionally fragile. Even the most cursory review of the game logs would show he was playing fine after the Granger trade and fell off the cliff after the elbow.

Another friend, this one in DC, follows his normally very active Twitter feed and says that he has barely tweeted since April 2nd. And he's an outgoing personality, guest starring on Parks & Rec all the time among other stuff.

8) I follow him on Twitter and yeah it's been radio silence. For what it's worth he seems like a great kid, which makes the whole thing weirder.

[9] He had the slip-up with homophobic language in the Playoffs last year. It seems to be generally forgiven. And to me it seemed born of trying to sound tough and hip, not of malice.

I've seen more of Hibbert than most non-Pacer fans viewers, having watched him throughout college. He would never shrink from competition. He would never give a small effort. But he certainly can suck on any given night. Just not on all of the nights.