< The Realness      You Can Have Anything You Want, But Not Everything >

You Must Remember This 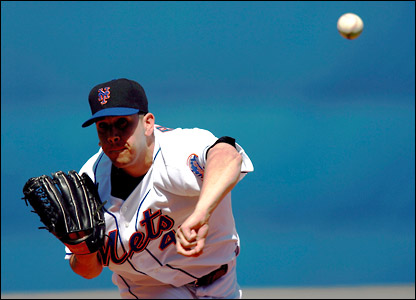 If the Yankees could only win one game this weekend I wanted it to be today’s game. That’s what I was saying all last week. I said two things: I hope the Yankees split the series and if they can only win one, let them beat Oliver Perez on Sunday. Perez is like AJ Burnett to me. Not as good, but still. Loads of talent, great "stuff" yet hopelessly erratic. Million Dollar Arm, Ten Cent Head kind of guy.

Of course, I’m more than half-expecting Perez to go out and throw a three-hitter. Walk five guys but still win.  He is 4-1 lifetime vs. the Yanks.

Let’s hope that I’m wrong and that Perez is wild and awful not wild and good. Like to see a big day from Alex Rodriguez and the Yankee offense. Jorge, Jetes, Melkawitz.  Want them to have Perez seeing nothing but this: (from Soxfan at YfSf)

Rasner seems due for a good start, doesn’t he?

It’s another hot one in New York. Got to figure the Mets are going to come out playing hard today. They need to salvage the split.  This is likely the last game the Yanks will ever play at Shea Stadium and our boys are playing with house money. Let’s see what they can do with it and