Good Things Happen when the Wife Goes to the Ladies Room

Sitting close to the action on Saturday night at Citifield (“I’m Still Calling it Shea,” read a t-shit), Emily and I were surrounded by Mets fans. We didn’t wear any colors. “We’re undercover,” my wife said to me. And so we were. I kept score (a scorecard costs five bucks; they go for twice as much in the Bronx) but had a mitt on my left hand in case a line drive came our way. No such luck.

The Yanks held a 1-0 lead into the sixth. The wife excused herself and went to the ladies’ room. (She was in the bathroom when Aaron Boone hit that dinger in ’03 and ever since I send her in when absolutely necessary.) Mark Teixeira doubled on Tim Redding’s 99th pitch of the night, and his next three pitches were hit as well: single (Alex Rodriguez), double (Robinson Cano), and home run (Jorge Posada).

AJ Burnett, meanwhile, allowed just one hit and three walks while striking out ten in seven innings of work. He mowed ’em down, as you’d expected against the Mets’ depleted line-up.

There was no blood orange sky but it was cool, pleasant night. Most of the Mets fans in our section had cleared out by the eighth inning. Em and I could have danced all night as the song goes. So we soaked it all in and went home heppy kets. 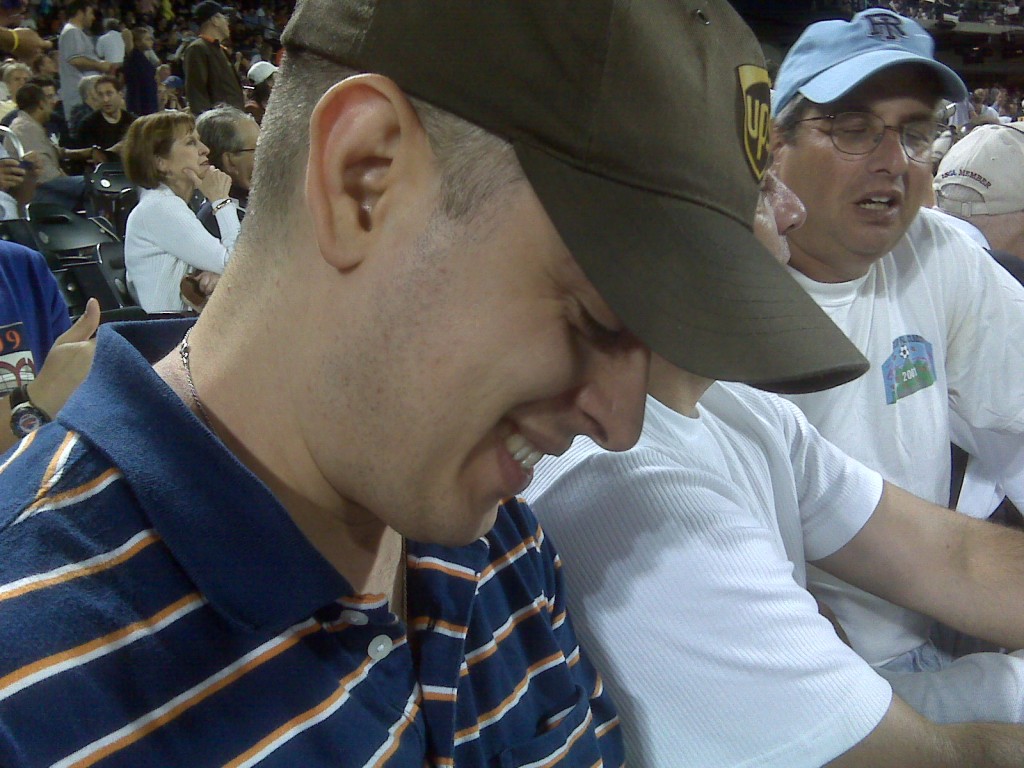 Where can I get me one of those "t-shit"s?

During most weekends, my wife's trips to the local library also coincide with Yankees production, almost immediately after the click of our front door, in an absolutely uncanny fashion, similar to the way I must leave the room while the Yankees are at bat.

Poor us and Emily...

I followed last night's game on gameday on my iphone while driving home from a match in allentown. I had no idea that AJ had a no hitter going. I turned it on towards the end of the bottom of the second and AJ had thrown 38 pitches or something. Well, needless to say, he threw a lot of pitches for a guy who was shutting them down so it never occurred to me to look at the box line.

Ironically, I had to check something and toggled out of the game for a few minutes in the top of the 6th. When I came back it was 5-0. Apparently I should not watch via gameday even.

I'm curious, Alex. What were you're impressions of Shea Deux?

And is that guy behind you wearing a University of Rhode Island hat???

RI Yank, check it out!

May I also compliment you on the freshness of your state-of-the-art headwear, Alex!

It's quite hep indeed to already have a hat from the movie "Up!"

Remember that awesome sky with the clouds from this post?:
http://tinyurl.com/nk4awt

Well apparently a lot of other folks found the formation fascinating:
http://tinyurl.com/njns7z

glad you had fun.

i watched most of the game out.
burnett was obviously quite impressive. i guess the variance in performances from him is something to have to accept at some point to reduce the frustration.
however, though his name is more suited for it - burn (bern) baby burn (bern) is bernie's ny rags!

also good to see po come up with a big hit. will be great to get him on a nice run.

Funny coincidence .... when Alex and I were at the Yankee game on the 17th, we ended up sitting next to a guy wearing a "URI Football" sweatshirt.

I asked the guy if the team was any good, and he said "they're awful, and I didn't even go there .... my brother got me this"

[8] Cool. Mammatus clouds. i don't thiink they covered those in my Earth Science class. I thought for awhile last night there was some unspoken arrangement that people were not posting b/c A.J. was tossing a no-hitter. I kept posting anyway. : ) Thought it might work.

The dimensions aside, Citifield looks really nice on TV, inside and outisde.

Well, AJ said when he got on a roll it would be "impressive", and it has been the last three games.

I'd rather the Yanks and Mets switched ballparks, dimension-wise.

Dying at 50 is still too young and unacceptable!

I'm reminded of Natasha Richardson with his death. He was supposedly on that plane that blew a tire and caused overhead luggage to fall on passengers' heads.

"I got a hard head," Billy said of the incident.

Royal blue with orange and white stripes? That's a Mets shirt if I've ever seen one. Or should I say a "Mets shit"? LOL!

At this rate, Belth will be suiting up for the Metsies in LF ...

[18] Dollars to donuts Mets fans mock-cheer him too when he makes a play...

Yay @ Boston losing to the Braves!

[14] Well, AJ said when he got on a roll it would be “impressive”, and it has been the last three games.

He has been impressive, and although I have been loathe to think this way in the past, I won't have faith in AJ or this team in general until they start consistently beating that despicable team that has held the title of the best run organization in MLB since 2004, especially in the playoffs.

As for the relative dimensions of the new NY parks, I'm still agnostic until more data is accumulated. For example, Posada thinks that the ball carries well in Citifield. I was referring to the aesthetics in my previous post.

We need AJ to pitch like this if we're going to stay close to the Shit Sox. He's got to be at the front end, because no one else really can. Joba can't seem to find his command each time out, Andy is hit-or-miss, and The Wanger's problems are well-documented.

AJ definitely has what it takes. Now that he's been in the Zoo for a while, I see him adjusting and having a big second half.

Things will really fall into place if Girardi finally figures out that Hughes can be a late-inning guy. Hughes, Bruney, and Ace in front of Mo is a combination that would call to mind the bullpens of yore. And Wang can watch from the sidelines once October rolls around.

As for Hughes in the pen, he definitely has the ability to be very good, but: 1) I'm not sure Pettitte still has enough to remain in the rotation; and 2) Hughes needs to reach 150-160 IP this season in order to be able to be a full-fledged starter next season.

I only see Aceves as a long reliever as a result of his high flyball rate. I think Robertson and Coke will be late inning guys. Maybe Melancon too.

Hughes is definitely going to make some starts in the second half. IMHO, he should be starting now and Wang should be DL'd again.

Maybe they're just looking to have him make a few good starts so he has some trade value. I'm trying to look at the bright side, because I think that's about all Wang's good for anymore.

Ace does have a high fly ball rate, but man he gets guys out. He's a competitor too. Why is his nickname The Vulture?

[25] I think that lineup is good enough to get the sweep if they can do what they did to Hernandez last time. I'm not sold on Posada catching Wang's sinkers in the dirt, though.

A 6-3 road trip is very acceptable!

However, Joe Morgan calling Yankees games is not!

apparently the Phillies have interest in Wang...

As much as I like The Wanger, I think he has peaked. He does not, and cannot, make guys swing and miss much, and that does not bode well. He relies heavily on the sinker, and though the fastball has been good in the past (~94), his velocity will only decline given his age. On the other hand, he still has some trade value. Time to give that spot to Hughes, I think.

@ #27: Best to mute Joe (Capn Obvious) Morgan and find some good radio commentary to go along with your video.

Well I'll be, it is a URI hat. I don't think I would have noticed that. Good call, Biscuit Pants!

There are lots of Yankee fans in RI -- I think it's because of the Italian heritage, from the days of Joltin' Joe. By 'lots' I mean maybe 15-20%, still greatly outnumbered. But you do see plenty of NY hats, so it's not too surprising to see an RI hat at the Stadium.

I won't be able to stay up to watch tonight, I'm afraid. I'm bushed. Good line-up tonight, though.
Go Yankees!

[31] When I visited Providence a couple of years ago, it seemed about 50-50. Well, not at Pawtucket Red Sox games, obviously, but that big mall in Providence had as much Yankees stuff as Red Sox stuff.

hope you had an easy flight and are having a blast in Scotland! will you get to see the Royal Mile?!

[30] no clue. they wanted Penny, but he doesn't seem to be going anywhere. i'm glad he lost today! Phils have "interest" in Wang and have scouted him, apparently. they want a right-handed bench player, even though they've got Mayberry, Jr.

I wouldn't bet against Wang yet. Last time he was at 62 pitches through 5 innings and had given up 3 runs. Who knows, that could have been a 7 inning, 3 run effort. Gotta give him the benefit of the doubt there. He's improving.

[29] i agree that he hasn't shown much propensity for success without the sinker working. but i agree with the hawk that he is improving and i think the sinker is coming back into form, so hopefully he is and can be productive.