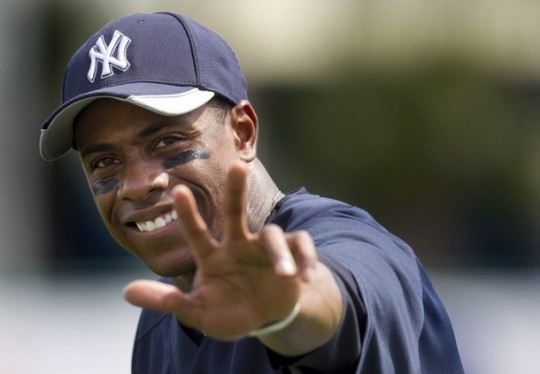 By no means was Curtis Granderson responsible for last night’s loss. If you want to pass blame around, you can start with A.J. and Mariano and eventually towards the middle you’d probably come to Granderson. But I bet he felt bad nonetheless. His base-running gaffe ended the game and robbed the Majors’ second leading home run hitter a chance to win the game. Anytime I made the last out of a close game, it tore me up for days. I’ll never get over making the last out of my Little League Championship game when I was ten.

Thankfully, Granderson doesn’t react like a ten-year old. Whether he shrugged last night off as a confident professional (ala what Mo will do for his recent funk) or if he came to the park a little more determined tonight to make amends, he was excellent. His three-run home run in the first inning assured that the Yankees wouldn’t be baffled by the Angels rookie pitcher making his Major League debut. And his solo homer in the fifth tacked on necessary insurance as Ivan Nova ran into trouble in the seventh.

(For the record, Granderson told Kim Jones that he forgot about last night when he left the park, and he’ll forget about tonight when he leaves the park. A little of Mo in the guy after all.)

The rookie making his Major League debut was Garrett Richards. He was making the leap from AA all the way to Yankee Stadium. And he didn’t land well. He walked Gardner and Jeter ahead of Granderson’s first blast. Until Teixeira grounded out, his Major League career ERA was infinite – that must have been the longest two pitches of his life.

The Yankees hit Richards hard up and down the lineup. They could still be hitting in the fourth if it wasn’t for a wonderfully athletic play in right-center by Peter Bourjos and an atrocious call at first base on Brett Gardner. The catch was especially fun to watch. It had all the synchronicity of a fake volleyball spike, where one player leaps at the ball and intentionally swings and misses while the next hitter lines it up for the kill. But dynamic instead of rehearsed. Torii Hunter was trying his best to make a sensational diving grab and when he whiffed, Bourjos had to keep sight of the ball, avoid Hunter’s body and still make the lunging, running snag.

Even though Yankees fans joke about expecting to be baffled by a newcomer like this, really, we expect them to drill the rookies. That’s why we get so worked up when they lose to them. Watching them clobber Richards reminded me that this was one of the biggest nights of his life and I felt bad that it was such a flogging. Not that I wanted him to win, but did every ball have to be hit on the nose?

Robinson Cano was one of chief culprits. In full ripper mode, he lashed balls in gaps and over fences for the three hard parts of the cycle. He just forgot to dink a single. When I realized he wasn’t going to get another at bat I was just slightly disappointed the Yanks were winning. But with the nature of the recent losses, there was no way I wanted to see a bottom of the ninth. We didn’t, as the Yanks won 9-3.

Ivan Nova continued to pitch well. He let up three runs in six innings. Five hits and three walks. Just really a special performance and a slap in the face to the godawful Burnett who was so vile last night that he let up four runs in six innings. Seven hits and three walks. Nova was bailed out by Soriano in the seventh and had seven runs of support. Girardi forced Burnett to walk Maicer Izturis and then left him to get out of his own jam. He didn’t and since he only had one run to work with, he left looking like a loser. When he failed, we crushed him for it.

I know Nova was better tonight than Burnett was last night. Burnett ran into trouble in the sixth. Nova made it to the seventh and that’s an important distinction. But the difference was not nearly as great as will be felt tomorrow.

Ivan Nova has pitched seven innings or more and let up two or fewer runs five times this year. Same as Burnett. Nova’s been better and I’d rather see him on the hill than Burnett, but it’s not as simple as Jack Curry made out earlier today. A.J. Burnett is going to be on the team for another two years after this season. The yankees are able to marginalize Posada because his career is over in a month and a half. If the same were true of Burnett, Girardi and Cashman could explore other options.

But it’s not just their jobs to win the most games possible in 2011. They also have to consider how publicly castrating A.J. Burnett is bound to have ramifications in 2012 and 2013. I’m as prone to rip A.J. for his bad outings as anyone, and I never understood the contract in the first place, but given where the Yanks are in the standings and where they are with all of these pitchers, I think they’re doing a good job of keeping all the non-CC pitchers in the mix.

Afternoon game tomorrow, hope the Yanks can win the series against another rookie, Tyler Chatwood. But it’s not his debut, so I won’t feel bad if the Yanks tattoo him.

I caught a couple of innings (including Nova's bad one and Soriano's repair thereof) in an airport, and am now commenting at 20,000 feet. (This must be the highest Banter comment ever, with the possible exception of some of Dimelo's.) Missed Granderson's homers, but saw Rob's.

I believe Girardi will Do the Right Thing. He removed Posada, and that must have been much harder psychologically for him that breaking the bad news to Burnett will be.

I have no idea what Nova or Girardi or Martin said after the game, but it looked to me like Ivan just couldn't locate his pitches in the seventh. He kept trying for an edge and missing wide or worse laying it over the plate. Hey, it happens. There is no question left in my mind that he's a better bet than AJ -- and I have not been one of Burnett's harder critics, either.

Now if Hughes can get on track...

Burnett's contract was easy to explain; the Braves were in on him too. That's probably why he got a 5 year deal, instead of a 4 year deal.

[2] I agree it's easy to explain the years and value of the contract considering other offers at the time, I just never wanted him to be a Yankee.

While a few others have better numbers, it seems to me that Grandy is the MVP. Above average D, above average speed, a .946 OPS (so far), league leader in RS, and will finish with 35+ HRs and 100+ RBI. Pretty awesome year for a CFer.

I was going to bring up Mussina and his banishment to the bullpen earlier tonight. But then I remembered just how terrible Moose had been up that point. AJ hasn't been that bad, but he does make everyone's head explode. 5 great innings yesterday and then BOOM. Oy! I noticed the front page has 5 uni pictures in a row. That's got to be some kind of new Banter record. ; )

[5] Granderson has also been the same player home and away, and all year long. Consistent high-level contribution. Definitely on my MVP shortlist.

Only problem is that none of the rating systems like his defense this year. They have him well below average, and it will be tough to guess how that will impact his candidacy.