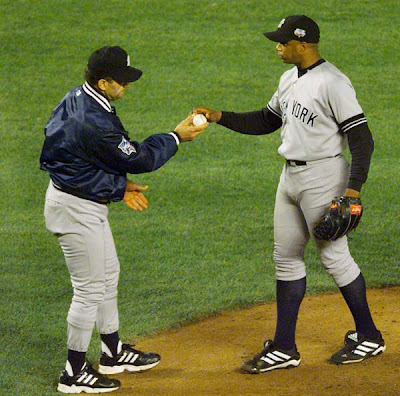 Other Yankees have been around longer. Other Yankees contributed more to the last dynasty. And certainly, many other Yankees were consistently better. But El Duque is one of the first guys I think of from that era. As a morbidly pessimisstic fan in those days (I think I’ve evolved past the morbid part in the intevening decade), no other starter inspired security like El Duque.

I’ll never forget the first inning of the 1999 ALDS against the powerful Rangers lineup. Pudge doubled with one out and El Duque faced the heavy hitters. He gave the lefties Greer and Palmeiro nothing at all and walked them both to load the bases. But the righties Gonzalez and Zeile he attacked with his full arsenal and exploited their aggression with ever-widening sliders until he had them fishing for pitches a foot outside.

And if there was a more crucial postseason game in the three-peat than his his ballsy victory in Cleveland in Game Four of the 1998 ALCS, I don’t know if I want to remember.

His pitching style was unforgettable and almost impossible to replicate on the stick-ball blacktop, though it didn’t stop us from straining our gluts giving it a try. His feisty confidence was refreshing and his arguments with Posada during mound visits were always entertaining.

When he walked those Texas lefties, there was no doubt it was part of a master plan. Perhaps that plan was a little foolish and left too little margin for error, but I don’t think El Duque ever worried that it wouldn’t work. And watching at home, I wasn’t worried either, which is probably why he was my favorite starter.

The Yankees had two players during the most recent dynasty who delivered performances vastly better than their career statistics would have you believe was possible. The great Mariano and El Duque. Mariano went from Hall of Famer to statistical impossibilty in the Postseason and El Duque, a quality middle-of-the-rotation arm, turned into Bob Gibson.

His baseball-reference page will have my kids wonder what all the fuss was about. I can’t wait to tell them.

Best of luck, El Duque and thanks for all the wins.

He was one of my favorites.

yeah el duque was one of my favorites too.
definitely one of a kind with quite an arsenal.
just somebody with a lot of presence. and the duque/po arguments were hilarious.

when i wear my duque shirt, i always get a few comments from people supporting the choice.

My favorite pitcher to watch of the post-Mattingly Yankees.

“Hey Coney, why don’t YOU have a dance?”

Duque will be missed. I also fondly recall his performance in 2004 - he comes back from out of nowhere, gives the rotation a shot in the arm, then seems to run out of gas at the end of the season, then . . .

I always felt '04 would have gone differently if El Duque had been 100%.

Blaming Knoblauch for the '98 ALCS Game 2 loss is not fair, but its the first thing I remember from that game.

Wow, I didn't even realize he was still pitching!

Yeah, he was something, all right. I still think of him fondly fairly regularly.

[7] Pettitte got lit up in Cleveland after the Knobby game.

[8] He got a few innings in the minors in '09 and '10 for the rangers and nats. He was gonna make them rip the uni off, and i guess they finally did.

He really was a lot of fun, even when he would mysteriously disappear for a month because of "toe issues." I always remember the ball getting stuck in his glove after a comebacker in a Subway Series game and tossing the glove to first to get the out.

The Duke of Havana is a great book about El Duque's whole saga and Cuban baseball in general.

Wish there were more like El Duque. A personal favorite.

Loved that one comebacker where he just stood astride the first base line with his arms crossed.

One of my favorites as well. Also remember a time he came in for the White Sox I think in Fenway ALDS bases loaded and got out of the jam may have struck out the next 3.

I own one Yankee t shirt these days. 26 HERNANDEZ

loved El Duque. Closest i ever came to catching a foul ball was in Anaheim, late 90s, early 00s. He was on the mound, and somebody rocketed a foul ball down the third base line. I reached up and it glanced off my fingertips.
I remember the sting, and thinking how cool it was that the last person who touched that ball was the great El Duque.
I had bad luck attending his starts though. Saw him get shelled a few times, but he was a favorite, and a joy to watch.
I remember being in the car listening to his incredible relief appearance against the Red Sox during the White Sox run in the '05 playoffs. Don't remember the specifics, but he pulled one of his Houdini acts. Great competitor, and an artist.

El Duque was awesome. He was absolutely awesome to watch. I still think of game 4 of the 2004 ALCS, where if Mo would have closed that game out then Duque would have been the winning pitcher.

Great, great, great player to watch. He was the El Tiante of our era.