From “The Age of Movies,” here’s P. Kael on History of the World, Part I:

When I saw History, there were hisses and walkouts during this number, and the film has been attacked as a disgrace by reviewers in the press and on TV. I bet nobody hissed or walked out on Candide. When Prince and Bernstein do it, it’s culture; when Brooks does it, there’s a chorus of voices saying, “He has gone too far this time.” Earlier in the film, the dancer Gregory Hines, who makes a breezy film debut as Comicus’ Ethiopian pal, Josephus, tries to convince the slavers who are sending him to the circus to be eaten by lions that he’s not a Christian but a Jew. With his loose-limbed body–his legs seem to be on hinges–he does a mock-Jewish dance, and then a shim-sham, and the racial humor didn’t appear to bother the audience. But during the Inquisition, when nuns toss off their habits, and a giant torture wheel to which pious Jews are attached is spun in a game of chance, there were mutterings of disapproval. Yet it’s Brooks’s audacity–his treating cruelty and pain as a crazy joke, and doing it in a low-comedy context–that gives History the kick that was missing from his last few films. The Inquisition is presented as a paranoid fantasy, with Jews as the only victims, and when Torquemada whacks the knees of gray-bearded old men imprisoned in stocks–using them as a xylophone–you may gasp. But either you get stuck thinking about the “bad taste” or you let yourself laugh at the obscenity in the humor, as you do at Bunuel’s perverse dirty jokes. The offensive material is a springboard to a less sentimental kind of comedy.

If Mel Brooks doesn’t go “too far,” he’s nowhere–he’s mild and mushy. It’s his maniacal, exuberant compulsion to flaunt show-biz Jewishness that makes him an uncontrollable original. At his best, he is to being Jewish what Richard Pryor is to being black: wildly in love with the joke of it, obsessed and inspired by the joke of it. What History needs is more musical numbers with the show-biz surreal satire of the Inquistion section; it’s the kind of satire that makes the Marx Brothers’ Duck Soup a classic farce. Brooks goes wrong when he pulls back to innocuous loveability–when he has Gregory Hines say to him, “You’re the first white man I even considered liking.” (Now, if that had been “the first Jews…”) Hines’ dancing–the movie could have used more of it–deserves better than a suck-up line.

When Brooks has a hot streak on a TV talk show, you can see his mental process at work, and amazing things just pop out of his mouth. He can’t get that rhythm going on the screen with prepared gags. Some movie directors can give their material that surprise. Altman has often done it, and in Hi, Mom! DePalma did it, with a highly inflammatory race-relations subject. But Brooks isn’t a great director–far from it. He’s a great personality though, and he moves wonderfully; his dancing in his Torquemada robes is right up there with Groucho’s lope. Wearing a little mustache and with his lips puckered, Brooks as Louis XVI bears a startling resemblance to Chaplin in his Monsieur Verdoux period. I kept waiting for him to do something with this resemblance, but he didn’t. Was he unaware of it? Lecherous Louis did, however, make me understand why women at the French court wore those panniers that puffed out the sides of their skirts; we see those ballooning bottoms through his eyes. (Brooks may be wasting his talent by not appearing in other directors’ movies while he’s preparing his own.) As a director-star, he has the chance to go on pushing out the boundaries of screen comedy, because, despite the disapproving voices in the press and on TV, he can probably get away with it. Like Pryor, he’s a cutie.

Too bad for us, Mel’s movies never got better, but he sure did score a hit with the play version of The Producers. 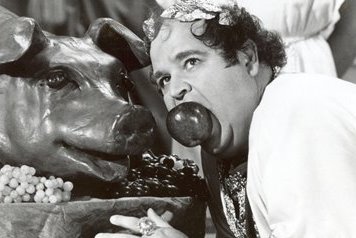 This is the only one of Mel's movies that P Kael liked but I think she covers what makes him so gifted as a comic--and so limited as a director.

[1] She didn't like THE PRODUCERS? I mean, if any of his films risks going too far...

I, somehow, snagged tickets to the first rehearsal of The Producers when it premiered on Broadway. Not "Opening Night" (I don't get that at all), but the first of a handful of rehearsals BEFORE opening night. Whatever. It was really cool.

So I'm having a drink in the lobby before the show with my girlfriend and another couple. We are leaning against some side exit in the joint, those crash-door types. Probably leading out into an alley. All of sudden someone starts knocking. We ignore it for a moment, but it gets louder. I finally open it up to see if someone needs help.

It's Mel Brooks and Anne Bancroft. Holy shit! He said he got turned around somehow and they were out there alone. He shook my hand and Anne Bancroft gave me a hug and a peck on the cheek. My head is still spinning all these years later just thinking about it.

After they left, our friends asked "Who was that woman with Mel Brooks?" Silly, silly people. :)

2) Actually, I shouldn't have said that because I don't know if she ever reviewed "The Producers." I'll check on that.

And what about Blazing Saddles? Mel does go right up to the line, but he succeeds because he is funny while pointing out the stupidity of racism and antisemitism and then again, not letting us forget history. He's spot on with how Jews were treated in Europe in the Middle Ages. Or even up to 1945.

Didn't Mel famously say, "I'm not a bigot. I hate everyone equally."

Blazing Saddles is an absolute classic. High Anxiety has its moments, too.

Mongo only pawn in game of life.