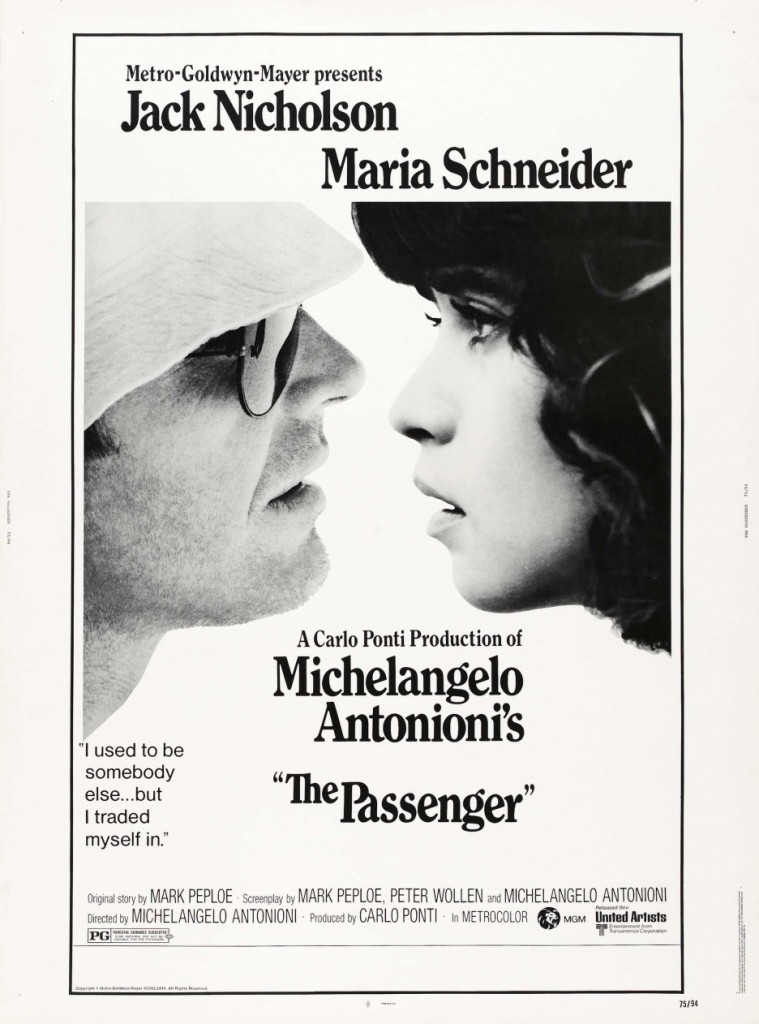 At first glance, Jack Nicholson and Michelangelo Antonioni would seem a mismatched pair: Antonioni, the gloomy, solemn, European master of existential alienation and Nicholson, all Irish-American brashness and energy — the most charismatic and aggressive movie star since James Cagney. However, with Antonioni’s 1975 film The Passenger, the odd couple proved to be a formidable team. Though the film failed to deliver to producer Carlo Ponti’s box-office hopes in the 1970s and was initially dismissed by many critics as a minor outing for both the director and star, its stature has grown and deepened over the decades, helped by a 2005 theatrical rerelease and subsequent DVD. Over thirty five years later, it stands as an artistic high water mark for both men. However, for those who can only envision Jack Nicholson as a hyper, wild-eyed madman, The Passenger offers an opportunity to see the depth and subtlety of his work, before he became hemmed in by audience expectations. 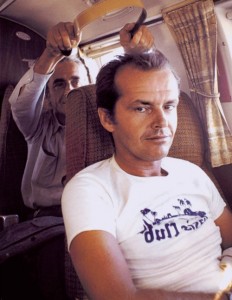 Nicholson, the quintessential star of 1970s “New Hollywood” spent the first half of that decade on an extraordinary run of iconic roles – including Five Easy Pieces’ Bobby Dupea, Chinatown’s  J.J. Gittes, The Last Detail’s Buddusky and, of course One Flew Over The Cuckoo’s Nest’s R.P. McMurphy (the part that finally landed Nicholson a Best Actor Academy Award).  Nicholson’s performance as David Locke in The Passenger stands up to his work in any of those films, while finding the actor in a far more subdued mode.

Locke is an English born, American educated journalist researching a story about guerrillas in an unnamed African desert country. After a particular hot and frustrating day in the desert, he returns to his hotel to find that he has no soap for a shower. He knocks on the door of his neighbor, looking to borrow some and finds the man lying dead.  Through flashbacks and an audio recording made by Locke, we see that the man, Robertson, was a fellow Englishman, roughly the same size and build as Locke, and with a similar hairline. Locke mysteriously and impetuously decides to switch identities with the corpse and disappear from his life, assuming the life of Robertson. While this snap decision to leave his wife and career behind, and start anew as a stranger in a strange land happens easily enough for Locke, he finds himself a pursued man – both by the producer and philandering wife he’s left behind in England and by people who want what Robertson had to sell or want him dead or arrested. It seems Robertson was not simply a travelling businessman, but an illegal arms dealer, supplying the guerrillas. 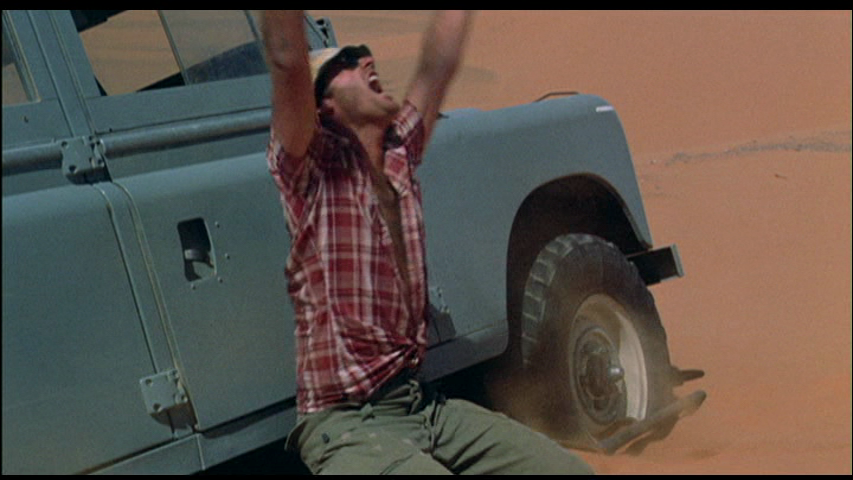 By evading the narrative of his own existence, Locke now finds himself thrust deeper into the story he was attempting to cover.  It’s a set-up that could easily be the plot of a very different sort of film, a suspense thriller made by Hitchcock, Polanski or DePalma; in Antonioni’s hands, it becomes a hypnotic, meandering investigation of identity, destiny and narrative itself. We’re never quite sure what has driven Locke to leave his life behind. Scenes of his wife back in London, and flashbacks to their life together hint that the marriage was unhappy, but his wife spearheads the search for Robertson once Locke is officially “dead.” We watch him have a frustrating time researching his story in the desert, but it’s also made clear that Locke is successful and internationally known as a writer and broadcaster.  In “Jump Cut,” Martin Walsh wrote of the film:

“At one point early in the film Nicholson points out that ‘we translate every experience into the same old codes’…Its importance for our understanding of The Passenger is of crucial significance. On one level, it helps make sense of Nicholson’s desire to cease being David Locke, to adopt a new identity, to escape the tyranny of the co-ordinates of his present existence, to re-open his life to new experiences. However, the way in which David Locke attempts to recharge his life proves fraught with unanticipated, uncontrollable dangers…”

Locke/Robertson leaves Africa for Europe, where, in Barcelona, he finds an unexpected travelling companion and lover, played by Maria Schneider (Last Tango In Paris). Together they become a couple on the lam, as Nicholson allows himself to be swept along in this new narrative he’s entered, despite its dangers. The girl follows suit, following Locke on his odd journey as if on some sort of scavenger hunt.

Locke continues along Robertson’s path, using the dead man’s datebook as his guide and talisman, until things meet their inevitable end in a dusty Spanish hotel courtyard, where all the main characters converge and Antonioni pulls off one of the most incredible shots you’ll ever see in a movie.

Looking back, it’s fascinating to watch Nicholson play this character at this point in his career. He’d played quiet, brooding characters before (e.g. Bob Rafelson’s The King of Marvin Gardens), but the success of Cuckoo’s Nest and relative failure of The Passenger (and of Arthur Penn’s western The Missouri Breaks, which paired Nicholson with Marlon Brando in the following year) may have pushed Nicholson into the relative safety of his more familiar screen persona, which Stanley Kubrick was soon to push to an extreme in his film of The Shining. 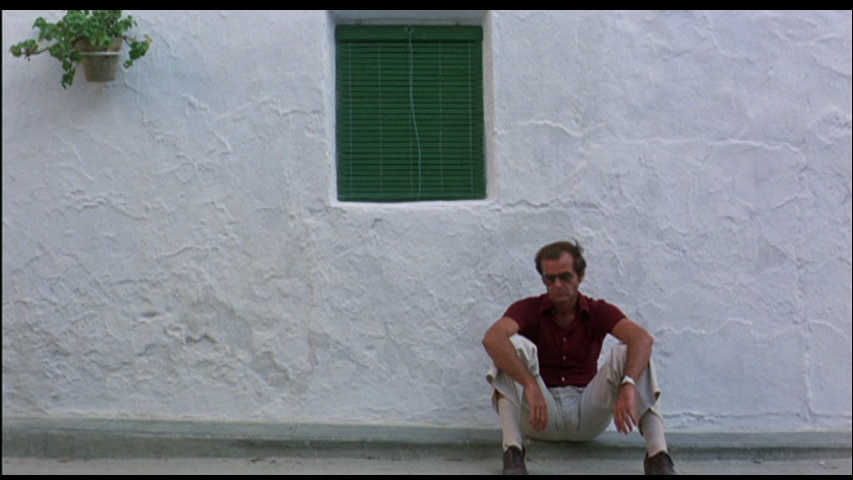 Great write up, Matt. Interesting about the career path Nicholson took. Makes me wonder if Scarecrow had been a hit if Pacino would have been doing corny goofball comedy roles.

Need to watch this again, love Antonioni AND Jack.

I think Nicholson has always been willing to take on different sorts of roles, but audiences don't necessarily connect the way they do with "Jaaaaack."

4) So true. He's done a lot of stuff, a lot of different things.