Color By Numbers: The One that Got Away 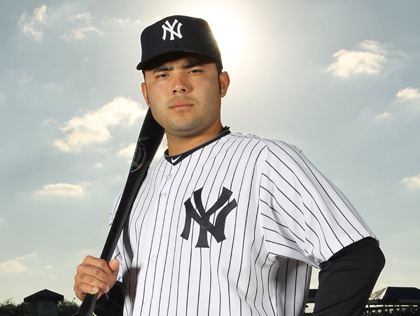 Whenever a team makes a trade involving a young prospect, there’s always a fear he’ll wind up becoming a superstar. Considering the potential of Jesus Montero, that concern had to be foremost on Brian Cashman’s mind as he agreed to send the young hitter to the Seattle Mariners in exchange for Michael Pineda, a very promising prospect in his own right.

Years ago, before the information age, prospects seemed to magically appear on the doorstep of the major leagues. Nowadays, however, fans have the ability to track a player’s progress from the moment he is drafted until he takes his first pro at bat, so it’s easy to understand why many develop an attachment to homegrown prospects. And yet, in most cases, the pent-up anticipation usually leads to disappointment.

Since 1901, 379 position players (includes actives) have made their major debut in pinstripes, but only 52 ended their careers with a WAR higher than 15. Of that subtotal, all but 13 either spent most of their careers with the Yankees or were traded after establishing themselves in the big leagues, including 20 of the top 21 on the list. So, for the most part, the Yankees have been pretty good at not giving away their best position player prospects.

The Ones That Got Away Note: Includes players with a WAR greater than 15 who were traded by the Yankees early in their careers.
Source: Baseball-reference.com

The only discarded Yankee whose career WAR would rank among the franchise’s best homegrown talents is Dixie Walker. After compiling only 422 plate appearances in five seasons with the Yankees, the 25-year old Walker finally blossomed after being sold to the White Sox for $12,000 in 1936. At the time, the Yankees were a powerhouse team about to embark on a four-year championship run, so there was little room for Walker. However, the move still proved to be short sighted, but not until two other teams also passed him over. Once Walker landed in Brooklyn, his career finally took off. In nine seasons as a Dodger, the outfielder compiled an OPS+ of 128 and received MVP votes in seven years. Admittedly, most of Walker’s success came during the war years, but that makes his loss even more regrettable from the Yankees’ standpoint. Had the team not traded him so many years earlier, perhaps Walker’s presence in the lineup would have helped the Bronx Bombers weather the loss of so many others to military service and avoid what for the Yankees was a long World Series drought from 1944 to 1946.

Mike Lowell’s ranking on the list is perhaps the most relevant in light of recent news because, like Montero, he was traded as part of a prospect swap. At the time, the Yankees had a stacked offensive team and decided to make a new three-year commitment to 3B Scott Brosius, which made Lowell expendable. Unfortunately, Ed Yarnall, the pitcher the Yankees received in return, didn’t exactly pan out. After only 20 innings in the Bronx, the lefty was traded to the Cincinnati Reds before departing forJapan. Needless to say, Cashman is hoping Michael Pineda does a lot better.

Like Lowell, Jackie Jensen is another discarded Yankee who eventually made his bones in Boston. In 1951, Jensen had a very strong campaign in limited duty, which he parlayed into being named Joe DiMaggio’s replacement the following year.  Unfortunately for Jenson, that honor was short lived. In fact, it only lasted seven games. After hitting .105 during the first week of 1952, Jensen was traded to the Senators for Irv Noren. In the aftermath of the deal, Casey Stengel admitted that Jensen had talent, but stressed the Yankees’ need for a centerfielder who could “hit, run, field, and throw”. Of course, the irony was the Yankees already had someone on the roster who fit the description. His name was Mickey Mantle.

“We need a centerfielder who can hit, run, field and throw. I tried to give Jensen the job, but he couldn’t hit for me. I couldn’t wait any longer.” – Casey Stengel, quoted by the New York Times, May 4, 1952

Less than a month after the trade was made, Mantle was installed as the new center fielder and Noren was reduced to playing a utility role. Meanwhile, Jensen started to find his swing with the Senators, leading AP to suggest that the Yankees “pulled a whopper” by making a rare bad trade. Despite two solid seasons in Washington, Jensen really made his mark with the Red Sox. In seven seasons with Boston, the outfielder compiled an OPS+ of 123 and punctuated his career with an MVP in 1958.

Although his name appears at the bottom of the list, Jay Buhner probably stand outs to most fans as the best example of the Yankees trading away a promising young hitter. Seinfeld is largely to thank for that, but Buhner’s OPS+ of 125 with the Mariners wasn’t a work of fiction. Adding insult to injury, Buhner also tormented his former team on the field, batting .283/.379/.548 in over 400 regular season plate appearances to go along with a line of .366/.422/.537 in three post season series.

Top-10 OPS+ by Yankees in Their Debut Season

Note: Based on a minimum of 50 plate appearances.
Source: Baseball-reference.com

Albeit in only 69 plate appearances, Jesus Montero had the third highest OPS+ among all position players who debuted with the Yankees. That might seem like a bad omen, but he is surrounded on that list by more than a few players whose careers proved to be disappointments. Will Jesus Montero also follow that path, or join (and perhaps top) the list of young players who excelled after being trading by the Yankees? I wonder what Larry David thinks?

Every single time I see that Seinfeld bit I cry with laughter. Tearing into Steinbrenner about a trade moments after hearing his son is dead is the ultimate representation of the anti-George sentiment during that time.
I'll never forget that home run Buhner hit off the ambulance.

I wonder if Yarnall would be considered a big prospect today, knowing what we know about pitchers now. Something tells me he would not, even if he was a lefty.

I think Montero will do just fine, but as long as Pineda (and Campos) do as well, the Yanks will be happy. I am going to miss not seeing that kid become a monster hitter in pinstripes.

[2] He wasn't thought of as much more than a #3 or #4 starter at the time, which makes you wonder why the Yankees dumped Lowell. Maybe it was his health concerns?

I wonder if there's any weight in the notion that the type of lineup these prospects land in has any effect on their performance. Montero's going to hit a lot, but will he hit sooner or later in the M's lineup? Last year, the BUC role was his to lose in Spring Training and he promptly lost it. It then took him a couple of months before heating up and tearing the cover off the ball if I recall. In a lineup where he was considered more of a luxury than an important factor, he could just hit away when he saw fit, but I do wonder with whatever pressure comes to him in Seattle if he may or may not repeat his 2011 campaign from ST on. There's the possibility that he starts ripping from day one because he was also motivated the year before from being passed over for a call-up, but I think the first year, barring injury from either side, the Yanks have the edge just based on Pineda's league experience.

Jesus, I'd forgotten all about Yarnall.

Yeah, I'll miss him, too. I sure wish this was not necessary, that's for sure. Fricken A.J....

I've mentioned this here before, but I was at that game with my brother---he missed the HR because he was trying to get some beer or food or whatever. The HR was incredible. I've not been to too many games at the stadium, maybe 30 or 40 over the years, but I'll always be able to say I say Buhner hit the ambulance at the old stadium.

William, did you look at any of the guys the Yanks traded away before they made their debut? Fred McGriff jumps out as guy they traded that ended up having a huge career, but he was still a teenager at the time.

[8] Unfortunately, I don't know of a source that will both allow me to compile a list of players traded by the Yankees before they debuted and then cross reference it against eventual performance. Otherwise, there would be some names, like McGriff, who was infamously traded (with Mike Morgan!) for Dale Murray. That would also be an interesting topic, but I didn't want to rely on my selective memory.

[9] McGee is another example. Bob Sykes didn't exactly pan out for the Yankees. In fact, he was released the following year and never played again in the majors.

[10] yeah, i don't know how to do that either. maybe we can search all yankee draft picks on BBRef and then sort by war? i'll check.

I'm sure I'm missing some people, but looks like the all-time "traded-away-young" position player team would be: C: ausmus; 1B: mcgiff; 2B: gagne; 3B: lowell, SS: held; LF: walker; CF: mcgee; RF: jensen, w/ o'doul, buhner, everett and montero vying for DH and PH spots. perhaps montero could catch for this team.

McGriff and Walker are far and away the best position players traded away young. Not a bad organizational track record.

Christian Guzman can be your SS, even though no one will cry about it. Austin Jackson on the bench.

Any video footage somewhere of that Buhner ambulance tater? Why are MLB so skimpy with their video highlights? Can watch hours of NBA on YouTube..

[13] I think he's just counting prospects who never actually played for the big team; tho Jesus doesn't exactly fit that descript either.

Hey, let's not forget the following who were once drafted by the Yanks: John Elway, Bo Jackson and Daunte Culpepper...

[3] I seem to remember Yarnall was more highly regarded than just a 3/4 starter, but maybe not.

[13] I agree that the Yankees have had a worse track record in trading young pitchers. Don't forget Lilly.

And, further back, Lew Burdette . .

[13] If anyone is interested in seeing the pitching side of the equation, it's here: http://tinyurl.com/6sjls86

[16] He really wasn't thought of as a major prospect, but I am sure the Yankees expected he could vie for the 5th spot in the rotation.

I'm pretty sure I remember reading that the reason they traded Jackie Jensen was because he was afraid to fly. The Yankees were switching to air travel and he kept freaking out and becoming a distraction.

[18] I did a fair amount of research and the issue of flying never came up. It just seems as if the Yankees panicked when he got off to a slow start, especially facing life with about DiMaggio.

However, Jensen did develop a notorious fear of flying, which hastened the end of his career. SI had a great article on the topic back in 1976. http://sportsillustrated.cnn.com/vault/article/magazine/MAG1090965/3/index.htm