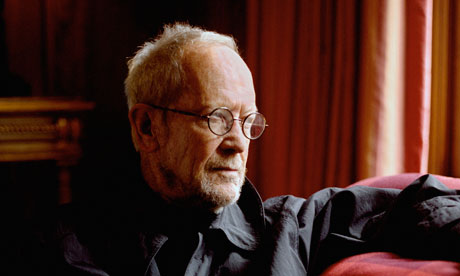 In an essay that appeared in The New York Times in 2001, “Easy on the Adverbs, Exclamation Points and Especially Hooptedoodle,” Elmore Leonard listed his 10 rules of writing. The final one — No. 11, actually — the “most important rule . . . that sums up the 10,” is “If it sounds like writing, I rewrite it.” It’s a terrific rule. In fact, I liked it so much that I passed it on to a creative-writing class I once taught. However, there’s more to it, which I didn’t pass on: “Or, if proper usage gets in the way, it may have to go. I can’t allow what we learned in English composition to disrupt the sound and rhythm of the ­narrative.”

Jazzy prose that occasionally lets go of “proper usage” is Leonard’s trademark. He’s a stylist of forward motion, placing narrative acceleration above inconveniences like pronouns and helping verbs. While this creates in most readers a heightened sense of excitement, newcomers may find the transition from complete sentences daunting; it may take a little time to accept Leonard’s prose before you allow it to do its work on you. I’ll admit to having to make such an adjustment when beginning “Raylan.” At the same time, I’m also a novelist who lives in fear of my copy editor; being such a coward, I can’t help respecting Leonard’s grammatical bravery.

If you’ve never read Leonard’s essay on writing, do yourself a favor, huh?

3. Never use a verb other than ”said” to carry dialogue.

The line of dialogue belongs to the character; the verb is the writer sticking his nose in. But said is far less intrusive than grumbled, gasped, cautioned, lied. I once noticed Mary McCarthy ending a line of dialogue with ”she asseverated,” and had to stop reading to get the dictionary.

. . . he admonished gravely. To use an adverb this way (or almost any way) is a mortal sin. The writer is now exposing himself in earnest, using a word that distracts and can interrupt the rhythm of the exchange. I have a character in one of my books tell how she used to write historical romances ”full of rape and adverbs.”

5. Keep your exclamation points under control.

You are allowed no more than two or three per 100,000 words of prose. If you have the knack of playing with exclaimers the way Tom Wolfe does, you can throw them in by the handful.

Love Elmore's rules - #s 3 and 4 are always in my head when I am writing dialogue. I also love the Tom Wolfe crack in rule #5. He's right - Wolfe goes nuts with exclamation points, but he can pull it off. Most of us cannot.