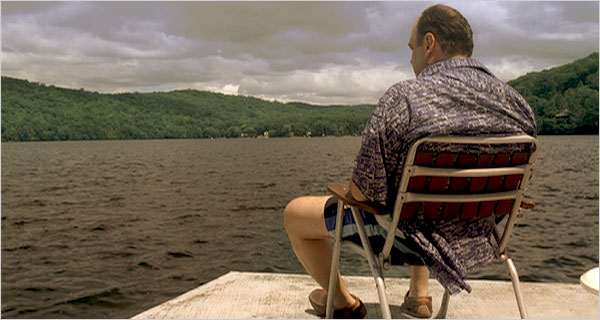 There’s a long oral history by Sam Kashner on The Sopranos over at Vanity Fair. Mind candy for those of you that dig that sort of thing.

and for those who want to argue The Wire:

Can't they just both be terrific?

oh I agree totally, but this whole NY Magazine "Best Drama Ever" tournament they have been running this month has brought the debate up. Hey, I love them both. And I think it's a great argument to have, because it's greatness vs greatness. Mays vs Mantle.

Thanks for the link. I love these kind of things but I wish this had a little more detail. Nonetheless I enjoyed it.

The Wire takes the cake for me but they're definitely in that category where it's like, take your pick. I absolutely put Mad Men there too though maybe since it's still going I ought to wait till the end to say for sure.

[1] I don't think comparing or contrasting them on the basis of the Sopranos' strengths will end up good for the Wire, but the converse t is true too. The Sopranos had nowhere near the social scope of the Wire. And that's fine - the shows had different goals.

I think this whole "better than" BS has amplified due to our twitterific lifestyle these days. "I love something, so if you don't, you're a jerk." You see those sentiments all the time on the net. It's craziness.

[3] Its fun to discuss the shows themselves, but I don't get the idea of a competition. These shows aren't always after the same ends or made in remotely the same styles.

[2] & [5] Maybe I have the wrong guys, but I seem to remember a few qualitative debates on the merits of one film over another before from guys with similar handles as those. Now it's off limits? Is this the first thing you guys have agreed on? :)

Arguing about the Wire and Sopranos is very much akin to the Mantle/Mays debate and where else are we supposed to do that but around our internet water cooler?

don't get me wrong, if The Sopranos never existed then The Wire would probably be my favorite show of all time. And I agree that their similarities are mostly superficial, but c'mon...debates are fun!

[6] I have no doubt I am guilty as charged, but even with movies, it can be puzzling.

[7] Never got the Beatles vs. Stones thing - I mean, I totally understand where it comes from and how for some people the answer is absolute, but for me it really depends on when you ask me. I love 'em both too much so it's likely whichever one I listened to most recently.

[7] Also, I really loved Deadwood and would put it high up on my short list. So there.

I don't know, that's just off the top of my head. I'm sure it can be improved upon.

[10] If Mad Men finishes at or even near its average quality, it will have been equal to or better than all those shows.

Love Mad Men, but I'll be surprised if it gets higher than #3 on my list.

Havent' seen The Wire, but Mad Mean, Sopranos and Deadwood are all perfect, especially Deadwood, which is downright Shakespearean. For pure poetry and catharsis, I'd have to go with Deadwood.

[13] I LOVE Breaking Bad but I don't think it's been quite upper echelon for its duration. It's a little too cartoonish to really be transcendent. I mean, that's what I love about it, but to me it's more in line with, say, Justified. Don't get me wrong, it's about as good as it gets for that type of thing and I don't penalize it because of its pulpiness, it just inhibits it from reaching certain places.

[15] I really feel like the term "Shakespearean" is misused. Usually people seem to mean it in terms of dramatic scope, but really all those stories are from elsewhere. If something's to actually be Shakespearean, the language is the thing. Which you seem to allude to by referencing poetry, which piques my interest, not having seen it.

[12] I think #3 behind the Wire and Sopranos is pretty darn reasonable. Like I said earlier, at a certain point, when you're comparing greatness with greatness they're more or less interchangeable.

[16] David Milch's unique dialogue is, well...I don't know that it's Shakespearean, but it's unquestionably artistic, stylistic and all its own.

[16] Yes. I do not use the term lightly. In some ways, it's literally Shakespearean in the language in that the literary imagery from that period came from the King James Bible, which belongs to the period. The syntax, poetic imagery, register, etc., really do strike my ear as Shakespearean. Also the potency of literary devices like irony, also, the mixture of high and low registers and the overall density of the language.

Hamlet is very dear to my heart so when I say Shakespearean, I don't do so casually.

Also, I don't know if the dialogue is written in a formal meter, but it sure sounds like it. The most musical dialogue I've heard on a television show, that's for sure.

[18] David Milch made a point of this in a piece I read, saying that very few people would have been literate, but those who were likely had very little reading material outside of the King James Version.

I loved LUCK, too, along with about 6 other people. I'll miss it.

[22] I liked John From Cincinnati, but Luck was *really* good. I'm sorry that it didn't click with more people, because they missed some tremendous stuff. I could watch guys like John Ortiz & Kevin Dunn every week for a long, long time, man, not to mention the big names like Hoffman, Nolte, Farina & Gambon.

In other news, RIP Earl Scruggs.

[18] [19] [20] Wow thanks. It's funny, I'd never read about that aspect of the show. Or maybe I had but it didn't really register. That's pretty great. I am officially going to check it out now!

This is way too late but I'll take The Wire over The Sopranos any day. Breaking Bad is good times. Game of Thrones season 2 begins on Sunday and that show is intense. Kenny Powers on Eastbound and Down makes the wife and I laugh. And we watched the freaking end of Luck tonight. They can't end that show tonight. Forever. Oi! The racing scenes are amazing. Oh, and the Irish lass.

[25] "Luck" wasn't decent, it was fucking great. Sorry more people didn't give it a chance.

Wire. I haven't seen enough, but from what I've seen: A-Rod. (Complex, gifted, flawed and brilliant).

Haven't seen the others.

[30] Good one w/The Sopranos because it really did change everything.

I also think the Sopranos had more inconsistency than The Wire or Mad Men, and that's probably because they experimented more. And I think they experimented more because it was a phenomenon - they had cache and they used it, which I'm all for. I don't penalize the show for experimenting, actually - I think it's commendable and it usually worked to one degree (Tony's coma) or another (Vito's life in the sticks).

But anyway, The Wire is more than A Rod. Its flaws are very few. (The fact that one of the main characters' accent is dicey as hell is one of them.)

[31] How is "I'm sorry more people didn't give it a chance" the same thing as "If you don't like it, you're a jerk?" Not sure why you're intent on baiting me, but you keep twisting my words.

The Sopranos totally changed the game, but it owes a debt of thanks to The Larry Sanders Show, oddly enough. Sanders was the show that really changed the perception of a series on a subscription cable network.

I just wanted to point out in a non-aggressive way by using your previous comment that you were anxious to defend "Luck" against a non-existant slight (calling it decent was just a way to re-use Alex's first comment) lest "Luck" be deemed in the same class as "John in Cincinatti" and yet were critical of someone else not wanting The Sopranos to be judged behind than The Wire.

I also think if you and Hawk re-read the whole thread, you'll see I had only playful intentions. But again, I am sorry if you are rankled.

Yeah I was just butting in. I didn't think it was insulting or anything, just that the two statements weren't really comparable.

[37] I blame myself for posting at 7am. Who am I kidding, I blame my kids for being crazy at 7am.

I was emphatic about "Luck" because I really feel strongly about it and it just didn't connect with enough people. I'm not surprised, but I am disappointed. It was the kind of show you needed to watch multiple episodes of to really get a handle on, and most people are unwilling to make that commitment (understandably).

I'll go on record here and say I think the ending of The Sopranos is genius. Or at least inspired.

[32] agree.
[30] I like those. But as The Hawk said The Wire is more than A-Rod. I would say The Wire is Bonds (he's the best I've ever seen) but that would probably rankle a lot of folks. The Wire is Pedro. His injury-prone aspect is McNulty's unfortunate accent.
[41] I think it was the best of any possible ending and a perfect culmination for "the Sopranos".
[34] I'll have to check out Larry Sanders Show. Has it aged well?

[40] 3 horses died, and after the bad press they got about the first 2, when the third happened, they shut down production. The third was a truly fluky occurrence and the fact is that the show was singled out because it is about thoroughbred racing. The attacks on the treatment of the animals on the set were apparently packed with half-truths and distortions and chances are if the show were a big hit, HBO would have fought back and kept it on (if 3 horses die during the filming of Game of Thrones - which conceivably could have happened - I doubt you'll see HBO pull the plug). Read Matt Zoller Seitz's excellent interview with David Milch and Michael Mann.

This is great too:
http://www.hitfix.com/blogs/whats-alan-watching/posts/interview-luck-creator-david-milch-on-the-series-premature-end