I just looked in the mirror
And things aren’t lookin’ so good.
I’m looking California
And feelin’ Minnesota.

That brief stanza may be an apt way to describe Hiroki Kuroda’s start Wednesday night. He was both looking and feeling California in the home opener last Friday against the Los Angeles Angels. In the song, “feeling Minnesota” is a euphemism for feeling terrible. On the field, Kuroda wasn’t feeling Minnesota, Minnesota was feeling Kuroda. Four of the first five Twins to come to the plate in the first inning got hits and scored. By the time Kuroda had thrown 13 pitches, the Yankees were in a 4-0 hole. 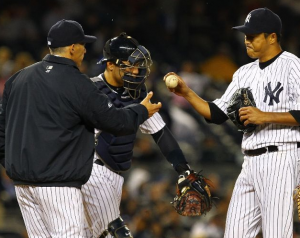 Kuroda’s downfall was Justin Morneau. His two-run home run in the first inning put the Twins up 4-0, he singled and scored in the third, and he belted another home run in the fifth — a solo shot — to end Kuroda’s night. (Not to question X’s and O’s, but Morneau’s fifth-inning home run came on a 2-0 count. Was anyone else thinking, “Hey, the bases are empty, walk him and take your chances with someone named Chris Parmelee?”).

The Yankees’ lineup, which was without Alex Rodriguez and Brett Gardner but had Mark Teixeira back, did their best to bail out Kuroda, responding with three runs of their own in the bottom of the first. Trailing 4-3, they loaded the bases with one out and a realistic chance to post a crooked number until Eric Chavez ended the threat by grounding into a double play.

Three different times the Yankees would get to within one run of the Twins, but not once could they tie the game. Three straight innings — the fifth, sixth and seventh — the Yankees put the leadoff man on base and mounted threats, but couldn’t score. After the first inning, the only runs they were able to manage came off solo home runs from Robinson Cano and Derek Jeter.

6-5 final, series finale with Phil Hughes on the mound Thursday. Are you confident?

ROOT FOR THESE GUYS

I got to see the reunited Soundgarden outdoors on Lake Tahoe last summer. It was way better than this game, which sucked ass.

[1] Soundgarden reunion tour? Jeez, I remember listening to them in college..20 years ago..when "grunge" bands are reforming for cash-a-palooza reunion tours that's a sign you're getting older!

Further bummer: Gardner to the DL.

[2] Yeah, it does make you feel old. Brings back some memories too. I get the feeling they are into it for more than just cash, since they are writing new songs and there is no shortage of other work for Cornell, at least.

[3] Heard that. Horrible news for our senior line up.

Speaking of old. The Who are coming to Japan. Apparently they are doing a live "Tommy." But they call it "Thomas" now.

I actually saw them do Tommy live in 1989 at Giants Stadium.

[4] Yeah, man. Brett was tearing it up. And horrible news for the pitchers too, who will have at least two weeks of Jones/Ibanez behind them.

[4] Early Who records are great..can't imagine how awful their live show would be now.

[5] Ibanez in the field is terrifying..maybe this will wake up the Yanks to Gardner' real value?

[1] I laughed out loud at your post, Chris. I shuddered at the fact that I used the word "classic" to describe that song. Now I know how my mother felt when I was a kid and she was only 25 years removed from the Beatles on Ed Sullivan, etc. This is depressing.

[2][6] On Soundgarden's FB page, they link to YouTube clips of the current recording sessions. Matt Cameron is as solid as ever behind the kit. Definitely one who inspired me and my own playing. The Who's live show will remain good if they can find a serviceable bass player, and somehow retain Zak Starkey or Simon Phillips on drums. Daltrey and Townsend can still sing, play and perform.

Was there a game last night? I forgot...

[4] You think you feel old? I saw The Who do Tommy before the album was out in 1969. My summer camp in the Berkshires took the kids (I was in the youngest group to go at 12 years old) to Tanglewood to see the The Jefferson Airplane, The Who, and BB King one week before the Woodstock festival. It was a transcending experience for me, as real hippies were doing hippie things, and the music was spectacular.

What were the camp directors thinking?

You think you feel old? I passed up a chance to see the Monkeys! (Some kid named Jimi Hendrix was the opening act).