Wild Ending in the Bronx

In last year’s ALDS the Yankees touched up Justin Verlander but lost the game anyway when CC Sabathia blew the lead and Rafael Soriano gave up the winning homer. Tonight’s game spun out in unpleasantly familiar fashion as the Yankees got to Verlander for five extra-base hits and five runs in six innings but Ivan Nova couldn’t make it stand up. Nova was the one starting pitcher that had not submitted a stinker yet this season, but that’s history now. 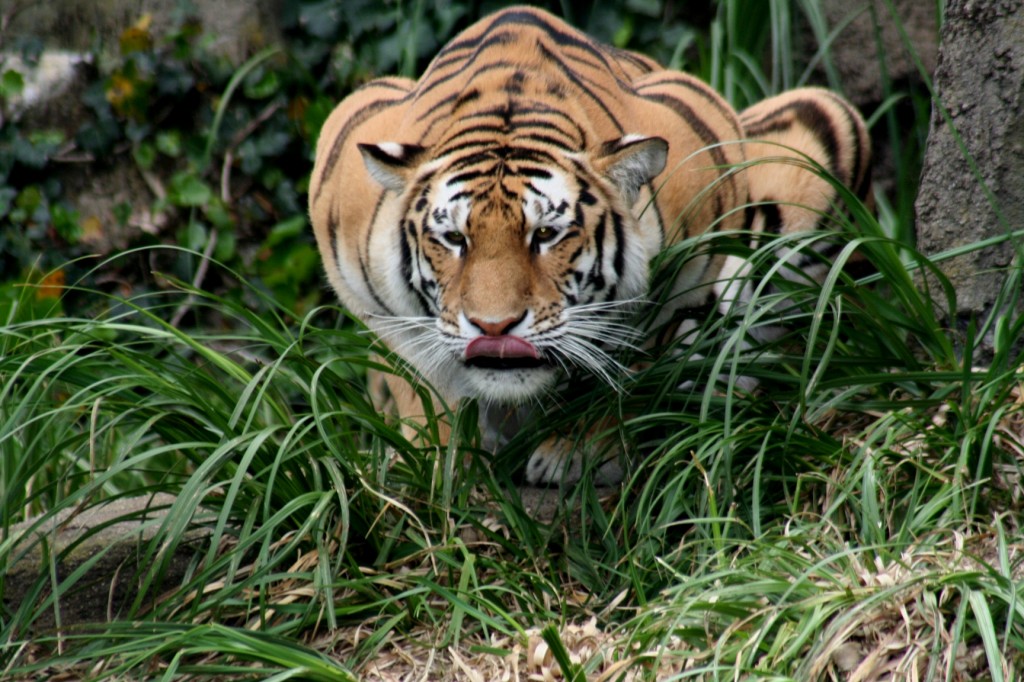 After five pedestrian innings, Russell Martin presented Nova a surprise lead with a two-run homer off Verlander headed into the sixth. Nova proceeded to back up pedestrian with pus. The Tigers teed off on everything he threw, and the lead was gone in three batters – the big blow a booming double by Austin Jackson. Boone Logan came in and lost a battle to Prince Fielder and the inning ended with Detroit up two, 6-4.

The Yankees bounced back, scratching a run in the seventh and clawing another in the eighth. In between, Joe Girardi got run out of the game for arguing balls and strikes. The umpiring was another unpleasant reminder of the 2011 ALDS.

The stellar Yankee bullpen stepped up to hold the line, the highlight being Mariano’s vintage ninth inning. He broke three bats and struck out a guy looking while touching 93 mph on multiple pitches. In his first few outings, Mariano’s cutter wasn’t moving that much. Now it’s biting like a January wind.

In the ninth inning, the Tigers sent out a flame thrower named Brayan Villareal. He threw the ball so hard and with so much movement that one suspected he’d have trouble throwing three strikes before he threw four balls. He ran the count full to Russell Martin but coaxed a grounder to second. Derek Jeter worked a walk (and ended his fifteen game hitting streak in the process) and when ball four to Curtis Granderson skipped off Mike Avila’s shin guard, he was in motion and made it all the way to third. That brought up Alex Rodriguez, who locked in today with three hits, one of them a homer off Verlander, and his only out three feet short of the center-field wall.

Alex looked very dangerous up there and I was sure he was going to drive in the winning run as he tracked Villareal’s offerings into Avila’s glove. After two balls, Villareal’s third pitch sailed away from Avila. The catcher desperately stabbed his glove at the pitch but he couldn’t snag it. The ball rolled away towards the Yankee dugout. I started celebrating, but when the camera cut to Jeter straining down the line, he was not nearly as close to home plate as he should have been. It looked like he was running in mud and Jeter slid just as the ball arrived. Villareal dropped the ball, but Jeter was safe anyway. The Yankees made a winner of Mariano, 7-6.

Turns out Jeter got a poor read on the passed ball and if it wasn’t for Alex Rodriguez urging him to run, he wouldn’t have made it. Great game for Alex all the way around. And a great win for the Yankees after a few days full of bad news. This is exactly the kind of game the Yanks did not win in last year’s ALDS. Hopefully they’ll have one or two in the bag next time they get there. 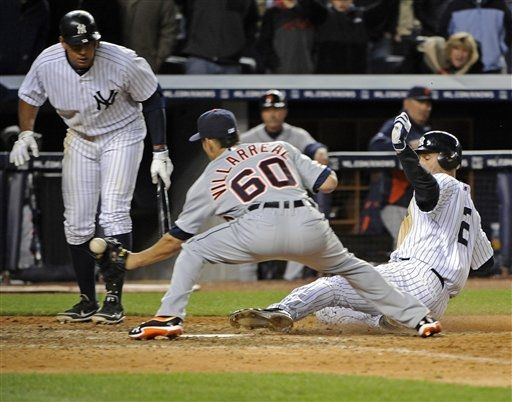 I’ve been stewing about Pineda’s injury and Montero’s absence since I heard the news yesterday. Since the trade can’t be undone, it’s wasted energy on my part to continue to be upset about this. But before I let go completely, I want to write now what I was unable to articulate when the trade was made.

The Yankees chose to ignore all of CJ Wilson, Yu Darvish and Edwin Jackson when they were available. Those guys would have all been risky and expensive acquisitions but if they sucked or got injured, ala Igawa or Pavano, they could go get somebody else. They can spend money over and over again. They can only trade Jesus Montero once. I know that Pineda was more attractive than the expensive free agents because of his age and restricted salary, but that’s not a concern the Yankees should have had at the forefront of their decision making. They walked a tightrope when they could have paid to pave a road.

Let’s not forget the Yankees have to buy offense in the very near future. All the savings they were going to get from Pineda’s presence in the rotation were going to be spent filling second base, two outfield spots, catcher, and third base / DH. Why not just keep Montero and save that money? Why is money saved in the rotation any better than money saved in the lineup? Now of course, there will be no savings from Pineda as the Yankees will have to buy pitching to replace him as well.

It’s a classic case of being too cute for no reason. Even if you liked Pineda better than Montero, surely you liked Darvish and Montero better than Pineda and Ibanez. This is a roster equivalent of Girardi’s first inning intentional walk. If everything worked out, he looks like a smart guy. But he brought catastrophic outcomes into play that did not exist before the walk. By trading away the less risky Montero and acquiring the inherently risky Pineda, the Yankees brought into play a scenario where they get neither Pineda nor Montero and have to pay a shit load of money to replace them both.

I feel bad for the dude. Hope he rehabs and pitches well for the Yankees some day. And I’ll just leave it at that.

A few observations from tonight's game:

Second, Joe Girardi has got to stop playing Raul Ibanez in the outfield. I mean, JUST STOP IT. Ibanez' misplay in left field did Nova no favors today.

By the way, Bobby Abreu is now available. As much fear as Abreu has of the outfield walls, he's a Gold Glover compared to Ibanez.

Luke Gergerson in for the Padres! NL Baseball, it's AWWWWWRIGHT!

Andrew Cashner now in for the Padres to face the Giants, bottom 8th. Maybe he can "cash in" for a save?

Sorry..stuck on sofa with a sick Jazz Princess, can't do anything but watch baseball.

[1] And what's with this new roster strategy, whereby the team loses an OF and replaces him with...a 13th pitcher?

[6] You mean you are not enjoying the Clay Rapada era?

Yanks are a good to great team but the AL East is going to be a fierce fight to the finish. Can't afford even minor mistakes than can potentially cost games.. (Ibanez in LF..Nunez at any position..endless "resting" of stars who are not tired..)

Sanchez with the laser perfect throw to 2B to prevent the stolen base. Beautiful!

Wow, except Cameron Maybin I don't know ANY of these SD Padres..need to watch more NL highlights. Enjoying this game. Pablo Sandoval really is..round and cuddly.

Huston Street closing for the Padres! (And I never knew it was "Huston" and not "Houston"..)
Facing Gregor Blanco (who?) to start the 9th..

[0] Best argument against the trade I've heard. And I've been stewing quite a bit myself.

[10] How many NYers look at that and say HOO-ston or HUH-ston because it's not spelled like HOW-ston >;)

Padres close out the Giants. Baseball done for the day unless I put on the Buffaloes vs. the Lions here..

I was disappointed by the trade at the time, too, but I don't think there's anything wrong with going for cost-controlled pitching instead of cost-controlled hitting. One way or the other, you have to pay free agents to fill the gap. And whichever way you choose to pay for pitching -- with a prospect or with $$$$$ -- your going to have a risky deal. Sure, easy to say that the Yankees could have paid the big money for Darvish, but look what happened to Boston, flushing the Matzusaka checks down the toilet every week (not to mention the Lackey money). And if you can really just go buy more, then fine, the Yankees can go buy more now, too. (I doubt it.)

Again, I wanted them to keep Montero. But it wasn't a dumb move.

Jon, when I'm trying to be rational about the Montero trade, I'm with you completely. There is inherently more risk with pitching then there is with hitting so why not keep the safer guy, i.e. Montero.

[1] Indeed. Send down the eighth bullpen guy, and bring up a competent outfielder. Gerardi needs to lose his "oh, he's a nice veteran fielder and he can play right field, too!" fetish. No, he can't.

Jesus has more RBI than A-Rod. Just imagine if he had been hitting in our line-up.

Actually, I have been pleasantly surprised by the offensive contributions of Ibañez so far. But the official spin that they got him "because he could play some outfield" is not only an out right lie, it is an insult to the fan base.

[16] Jesus has more RBI than A-Rod. Just imagine if he had been hitting in our line-up.

Huh? A-Rod has a hundred points of OPS on Montero. Jesús is a very bad hitter so far, and he's a DH, not a catcher. I don't miss him this year. He might turn into a great MLB batter, but as of now he's really bad.

I was against the trade from the get- go simply because I believed in Montero, and was skeptical about Pineda due to his struggles in the second half of his first season.
While the addition of the highly regarded prospect Campos sweetened the deal, it made me even more suspicious of the Mariners' belief in Pineda. I would not have taken the chance on Pineda at the expense of Jesus. Sometimes it's as simple as that.

(14) I agree RI that it wasn't a blatantly dumb trade. But I think Pineda's second half made him not worth the cost of a hitter like Montero.

As disappointed as I am, its still way too early to know how this works out.

[19] Admittedly, I did not consider his peripherals in my initial assessment of the trade, but either way, we're talking small sample sizes. My reservations had more to do with my belief in Montero, and what seemed to be going on with Pineda in the second half. It seemed that the league was catching up with him, and that he did not have enough pitches in his arsenal to compensate. The fact that he was shut down for a few weeks toward the end of the season was also somewhat of a concern for me. I wondered if the Mariners were just rookie-babying him at the end of a lost season, or if he was gassed, or injured. Either way, it was enough for me to say, no, you can't have Montero for him.
Again, Campos sweetened the deal, but it made me more suspicious of Pineda.

I'm still OK with the Pineda-Montero trade. I think GMs are more and more concerned with defense these days with advanced stats and I think Cashman saw no future position for Montero other than DH. The Yankees of all teams should not have a career DH as they are always going to have more than their share of aging star hitters in the field.