Color By Numbers: Better to Be Lucky? Or, the Curious Case of Ivan Nova 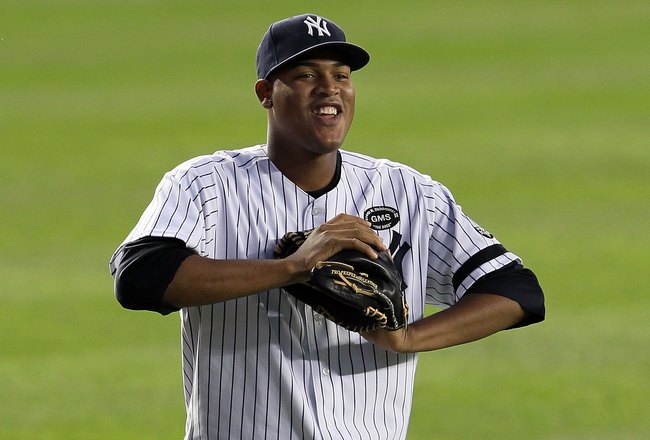 Ivan Nova’s luck finally ran out. For the first time since June 3, 2011, the Yankees’ right hander was tagged with a loss, snapping a streak of 15 straight victories, which ranks as the 17th longest stretch since 1918.  Because of the outcome, Nova’s streak of 20 games without a loss also game to an end, leaving him two behind Whitey Ford for the franchise record (Roger Clemens’ stretch of 30 games with the Blue Jays and Yankees from 1998 to 1999 is the all-time record).

Longest Streaks Without a Loss by a Starter, Since 1918

Note: 12 other pitchers are tied with Nova at 20.
Source: Baseball-reference.com

In fairness to Nova, his streak wasn’t all about luck. During the 20 games in which he went without a loss, the righty posted a respectable ERA of 3.61 to go along with an average Game Score of 53.7. However, those figures usually don’t add up to such a long winning streak. Of course, that’s because one very important statistic has been left out of the equation. During Nova’s streak, the Yankees offense scored 139 runs, or nearly seven per game. As a result, Nova was able to avoid being saddled with a loss in nine games in which his Game Score was below 50, including two that were below 25.

Just like his winning streak, Ivan Nova’s early career has been a contradiction. In his first 23 starts, the right hander posted an impressive 9-4 record, but it was supported by very questionable peripherals. However, after returning from a mid-season demotion, Nova was a very different pitcher. Thanks to an increased use of his slider, the 24 year-old bolstered his Rookie of the Year credentials by not only going 8-0, but doing so with much more impressive underlying statistics.

Over the first five games of 2012, Nova’s development has seemingly taken two different tracks. On the one hand, he has continued to improve his strikeout and walk rates, which should bode well for overall performance. However, those trends have come at a price because the right hander has also experienced a very significant spike in the number of hits and home runs allowed. To this point, the negatives have outweighed the positives, at least based upon Nova’s ERA and average Game Score.

A Tale of Three Pitchers: A Segmented Look at Nova’s Career

So, what are we to make of Nova? On the one hand, his improved ability to generate strikeouts and avoid issuing free passes seems very promising. Considering his astoundingly high BABIP (batting average on balls in play) of .398, it also seems as if Nova has been the victim of bad luck (and perhaps bad defense). At least that’s what measures like xFIP suggest. According to that metric, which takes into account peripherals as well as a normalized HR rate to predict a pitcher’s future performance, Nova’s inflated ERA of 5.58 should be more like 3.83. The Yankees would probably sign up for that without a second thought.

But, can we just dismiss all of the hits and homers that Nova has surrendered? Although his BABIP is abnormally high, it’s worth noting that the number of line drives and fly balls hit off Nova have increased (from 47.3% combined in 2011 to 55.8% in 2012), which might explain why he has allowed so many more extra base hits. However, that doesn’t explain why he has transformed from a groundball pitcher to one who allows so many batted balls to be hit in the air.  One possible answer could be that Nova is throwing too many strikes, particularly early in the count. Although that theory is supported by the high OPS against Nova in first pitch, 0-1, 1-0, and 1-1 counts, a sample of only five starts makes it far from conclusive.

Note: sOPS+ compares a split to the adjusted average for the league. A reading above 100 for a pitcher is considered below average.
Source: Baseball-reference.com

Who is the real Ivan Nova and what role has luck played in his early career? His success has seemed to be a byproduct of good fortune, while his struggles appear rooted in bad luck, making it impossible to get a good handle on exactly what kind of pitcher he has been, not to mention will be. So, despite his impressive winning percentage, Nova remains one of the many question marks in the Yankees’ rotation, which, this year, hasn’t been lucky or good. At this point, I’ll settle for either.

Amen on your last line.

[0] But, can we just dismiss all of the hits and homers that Nova has surrendered? Although his BABIP is abnormally high, it’s worth noting that the number of line drives and fly balls hit off Nova have increased...Who is the real Ivan Nova...?

The Son of Unlucky™ ?

[3] In Spanish, I think "Son of Unlucky" roughly translates to "Spawn de Mitre".

"Nova’s development has seemingly taken two different tracks. On the one hand, he has continued to improve his strikeout and walk rates, which should bode well for overall performance."
and
" One possible answer could be that Nova is throwing too many strikes,"

I wonder how many of his strikes are called (meaning the ball is in the zone) vs. swinging (likely to be out of the zone). If he's around the zone more often walks will go down, but hits go up.

Then there's the issue of who's playing the outfield these days. . .

[4] Then there's the issue of who's playing the outfield these days. . .

Fortunately the Yankees have recalled Jayson Nix, so Girardi now has three legitimate OF options (Nix, Nuñez, Ibañez) to go to now that Swisher and Gardner are on the shelf.

[4] His rate of swinging strikes is up to 7.4% this year, versus 6.6% last year, but hitters have made slightly more contact on balls in the zone. I think the problem is a combination of poor quality strikes, particularly early in the count, and a very bad defense.

[6] Thanks.
Via Lohud
Chavez to the 7 day DL, meaning a concussion.

[5] Those Yankees are clever. Not everyone would have thought to promote a utility infielder to fill the team's hole in the outfield.

[8] Do we know how/when the concussion happened? All I saw was him get dizzy and step out...

The Yankees are paying now for their inability to find a spot for Justin Maxwell. Jayson Nix? That's the best they could do for a spare outfielder?