The Banter Gold Standard: The Impression

On Monday, we ran Pete Dexter’s Inside Sports piece on Larry Holmes. Here is Dexter’s short article on the Holmes-Ali fight, reprinted here with the author’s permission. 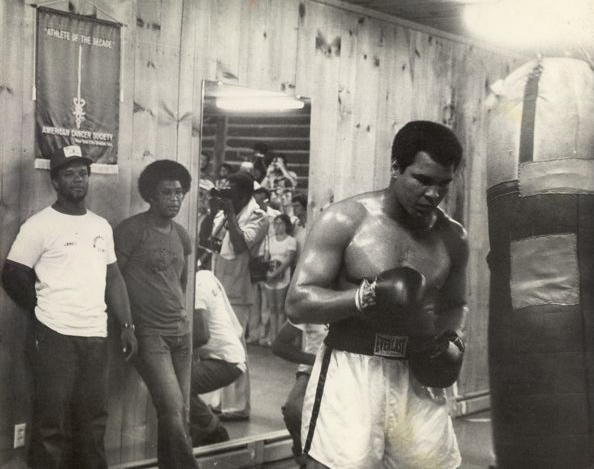 When I heard Ali had agreed to fight Holmes, the first thought I had was that Ali would be killed. The punch was five years gone, his hand speed had been mediocre over his last half dozen fights, and he’d been getting hit by people like Leon Spinks.

I didn’t see that two years in the pasture could have helped any of that. What figured to be left to him, at almost 39 years old, was the chin. Enough to keep him up a long time after he should go down.

The second thought I had was that I didn’t want to see it happen, and even if there was enough grace in that night to make me wrong once, there was nothing in it to make me wrong twice. And if the talk afterwards’ about thyroid pills and a fight with Mike Weaver is more than talk, I won’t be there. Ali might take the chance again. I won’t.

I couldn’t watch it again. Ali without his talent, growing old in one long night, people everywhere without words, growing old with him. In the casino you see Ray Robinson posing in pictures with people who remember him—you can’t imagine Ali like that. 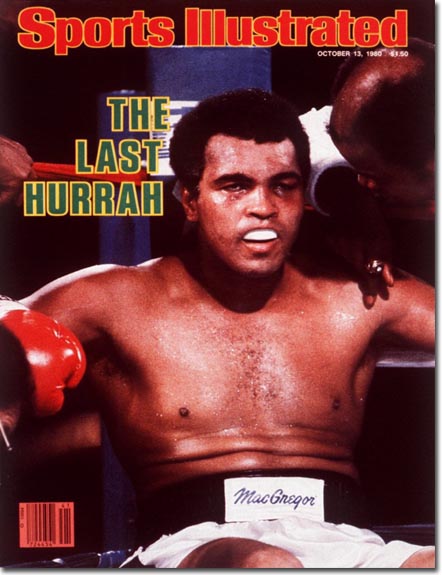 YOU WOULD not imagine Ali like this either: standing in front of Larry Holmes all night, eyes swollen, throwing no punches and once, after catching a terrible right hand, turning away in the ring.

Holmes had come into the fight in the best shape of his life—maybe he had believed the talk of a miracle a little bit, too. He began with energy and something close to hate, but after the second round he walked back to his comer wearing a different expression. “I knew what that look was,” Richie Giachetti would say later. Giachetti is Holmes’ trainer/manager. “We’d found out he didn’t have nothin’ left, and he was too old, and Larry was askin’ himself, ‘Do I really want this?’ All this time he was talkin’ himself into fightin’ Ali and now it’s here, he knows he’s got it won and the look on his face, it was just no expression at all. Usually he’d be happy or excited or somethin’, but the second round on. it was no nothin’ there. 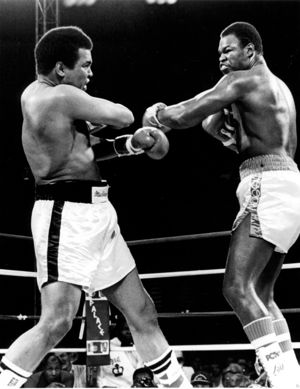 AFTER THE fifth round, Angelo Dundee threatened to stop the fight. It is the eighth round, though, that keeps coming back. It was like a dream that wouldn’t move. Ali lost in ringside smoke, leaning deep into the ropes, moving his hands in slow motion. The rinse washing out of his hair, going gray in front of my eyes … it seemed to last half an hour. Ali without his speed or a punch or his legs, without his mirrors, clearly without his miracle. Nobody to tell him he was pretty; nobody left to believe it could happen.

Standing because he would not let himself go down.

When Dundee finally stopped it after the tenth, Holmes came across the ring crying and hugged Ali. “I love you,” he ‘said.

An hour later he went to Ali’s suite and found him lying face down on his exercise table. “Please promise me,” Holmes said. “Promise me you won’t fight no more.”

The next morning Dundee was sitting in his room, answering the phone, drinking coffee. “I didn’t do good business last night. It was a horrible night. I seen an Ali, couldn’t do nothing. He just wasn’t there.”

He shook his head. “I hope he don’t fight again, but you know I don’t tell him what to do. Nobody does.”

In the end you have to admire that. He had an extraordinary talent. He had a talent as rare, in a way, as Robert Frost’s or Picasso’s. And a talent like that, I think, is always ahead of the man who has it. It leads him, it takes him places other people can’t go. And even when he understands what it does, he doesn’t necessarily know what it is.

But he had the courage to use it, to follow it, and when it left him standing in the ring, alone with the best heavyweight fighter in the world, he had courage for that, too. And one way or another—unless you’re Robert Frost or Picasso—that happens, because growing old is losing talent.

For a long time, Larry Holmes didn’t want the fight. Giachetti never wanted it. Don King, who would pick Joe Louis out of his wheelchair and feed him to Roberto Duran if the money were right, talked Holmes into it.

King told Holmes that he had been living in Ali’s shadow too long. Giachetti told him the shadow was there, and as shadows go it wasn’t bad.

“Nobody who really knows Ali can say anything bad about him,” Giachetti said. “Nobody wants to see him hurt. We knock him out, they say he’s an old man. We don’t, Larry’s a bum. It’s a no-win situation.”

Holmes listened to King. And in the way you sometimes do when you’re unsure, Holmes denied the part of himself that said he cared about Ali. And as the fight got closer, he came to believe Ali had taken something from him. “I don’t care. if he gets hurt,” he said. “He been denyin’ me my just dues all this time. The man hypnotizes everybody, he don’t hypnotize me. I know him better than he knows himself. There’ll be no mercy in there for him. He either gets knocked out or he gets hurt.” And there was hate in that. 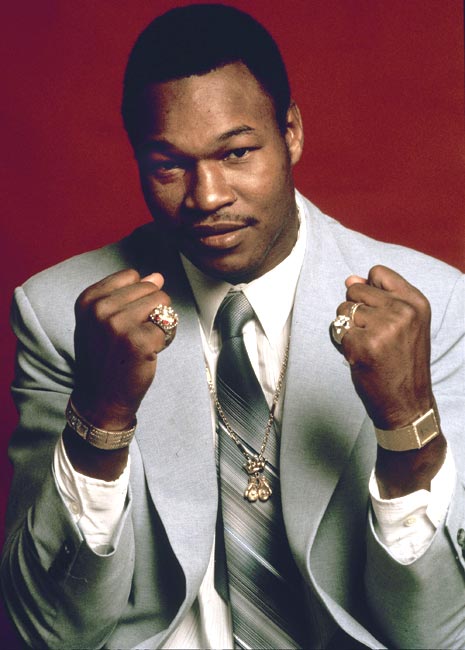 GIACHETTI FORGOT his reservations and got Holmes ready. “It’s comin’ down to a head job now,” he said. That was two weeks before the fight, and from then until the fight itself he kept Holmes away from Ali. “Nobody beats Ali at talkin’,” Giachetti said. “It’s his game. He says the same old things, but everybody still loves to hear it. It’s like ‘Moon River.'” So he brought Holmes to the weigh-in early. He refused to let his fighter pose with Ali for pictures. But Ali was always there.

After. his afternoon workouts, Holmes would take the microphone and ask the audience to believe he would beat him. “The old man has made a mistake. Porky gone crazy, fightin’ me. I could kick his ass back in 1974 when I was his sparring partner, and he never gave me my just dues….” It would go on too long, get awkward. Holmes being Ali, at the same time saying things from his heart.

“If I lose, I’ll retire. People will say I wasn’t ever nothin’ if this sucker beats me I’d have to go hide.”

On September 15, a kid named Gary Wells tried to jump over the water fountain at Caesars on his motorcycle, the same jump that almost killed Eve! Knievel. 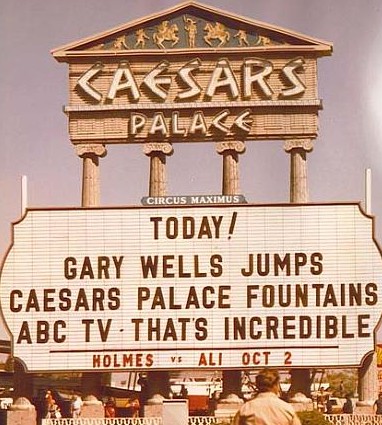 AN HOUR before the jump, Ali was sitting in bed, watching the Holmes-Weaver fight on the Betamax. As it moved into the later rounds Ali walked into a closet. There was a tray there with 30 different kinds of pills—that and a scale. He sorted out eight or 10 to eat with breakfast. He said, “I will tell you something. I believe I am on a mission from God. I pray five times a day, it’s 60 per cent of my power. Holmes out drinkin’ wine, gamblin’, how can he beat me?”

I asked if he had liked Holmes when he was a sparring partner. Ali looked at me to see if I was serious.

By the time Ali got out of the closet, Holmes had knocked Weaver out, and Truman Capote was bragging to Phil Donahue that he’d ruined Jack Kerouac’s career. Ali watched a few minutes. “This is a messed up world,” he said.

He stood up and looked out the window. The crowd was already waiting for the kid on the motorcycle. Ali had met him earlier. He had shook the kid’s hand and said, “You crazy.” The kid had liked that. A reporter asked if Ali would watch the jump.

“I don’t want to see nobody get his head ripped off,” he said. “They encourage him, but I know what people want to see when they watch somethin’ like that.”

He looked at himself in the mirror again and then laid down. On some unspoken signal, the old Cuban who rubs him down closed the curtains and the room was as dark as the night, and the reflection—the proof of the miracle—was gone with the sun. “As sure as you hear my voice,” Ali said, “you and l will both die.”

An hour later I was lying in my room when I heard the crowd and knew the kid hadn’t made it. The crowd, then the sirens. I thought of Ali, alone in his room.

"In the end you have to admire that. He had an extraordinary talent. He had a talent as rare, in a way, as Robert Frost’s or Picasso’s. And a talent like that, I think, is always ahead of the man who has it. It leads him, it takes him places other people can’t go. And even when he understands what it does, he doesn’t necessarily know what it is.

But he had the courage to use it, to follow it, and when it left him standing in the ring, alone with the best heavyweight fighter in the world, he had courage for that, too. And one way or another—unless you’re Robert Frost or Picasso—that happens, because growing old is losing talent."

Yup, thems were the money lines. Really fine. I am such a fan of Pete Dexter. I thank thee for sharing.

[1] Superb. Really digging this series AB, thanks a lot.

Wow. Dexter is a hell of a writer. Thanks for the post, Alex, and keep them coming. Gold standard indeed.