Let’s cap off Pete Dexter Boxing week with this beauty. It originally appeared in Esquire and can be found in Dexter’s stellar collection of non-fiction, Paper Trails, as well as the Library of America’s boxing anthology, At the Fights.

It appears here with the author’s permission. 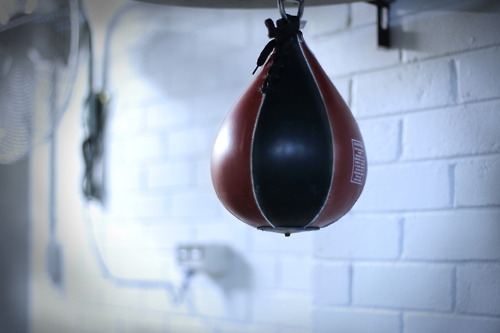 The first day the fighter came into the gym he went two rounds with a weight lifter from New Jersey who was just learning to keep his hands up—and he tried to hurt him.

I didn’t know if it was something between them or if the fighter just had a mean streak. Some of them do. Whatever it was, the fighter went after him, turning his weight into his punches, missing some, but dropping enough right hands in so that at the end of the two rounds the whole left side of the weight lifter—without ever having been hit perfect—was blotted pink. It’s an honest gym, and what happened wasn’t particularly violent, but it was out of place.

I was sitting by the windows with Mickey Rosati at the time, and his son, little Mick.

The two of them are with each other all day. They work together in their garage downstairs, they run together, they box each other two or three times a week. The kid is a world-class amateur. They know each other inside out—moves and moods—and I’ve never heard a hard word between them. You get the feeling sometimes that they’re the same person, spaced about thirty years apart.

Up in the ring, the weight lifter was getting packed into the corner like one shirt too many in a hamper. “What’s that about?” I said.

Mickey shook his head. “They’re both from Jersey,” he said. “Maybe they got on each other’s nerves.”

The weight lifter had a brother named Dennis. He was fourteen year older—closing in on forty—and two or three times a week the two of them came over the bridge from New Jersey to work out.

The gym sits on a narrow street in South Philadelphia where people park on the sidewalks and sneakers hang from the telephone wires. Inside, it’s honest and clean; at least, for a gym it’s clean. We are not speaking here of Nautilus-center clean, but people have been known to hit the bucket when they spit, and when Mickey’s hawk—which is another story—used the ring for a bathroom one afternoon, the spot was scoured with Lysol before anybody fought again. That might not sound like much, but in most gyms, hawk shit will petrify before anybody cleans it up.

The weight lifter liked to box when he could; Dennis wasn’t as serious. He slapped at the heavy bags or shadow-boxed, and once in a while he mentioned that he ought to be getting paid for his entertainment value, which was probably true. If it came into his head, Dennis said it.

During the month or two Dennis and his brother had been coming up, Mickey had spent some time in the ring with the brother, getting him used to the feel of soft punches, showing him how to relax.

At the start, the brother had gone home depressed. Dennis reported it while Mickey was doing sit-ups on an elevated board, his teeth biting a cold cigar. “My brother’s got guys terrified of him in Jersey,” Dennis said. “He can’t believe somebody as old as you could do that to him. All weekend long he’s messed up.”

Mickey lay back on the board and closed his eyes. “Suddenly,” he said, the cigar moving in his teeth, “I don’t feel like doing sit-ups no more.”

As a step in the mending, Dennis and his brother decided Mickey probably wasn’t human; at least they had no idea he could be beaten or hurt. They called him the Punching Machine.

You could see how they might think that. Mickey Rosati is fifty-one years old and left-handed, and he can still fight. But he is fifty-one years old. His shoulders hurt him after he works out, he gets poison ivy just looking at the woods, and the speed he had when he won twenty-two straight fights back in the fifties isn’t there like it was. On brains and shape, he would still beat most of the four- and six-round fighters at his weight in the world, but he pays more to stay that way than anybody who isn’t around him could know. 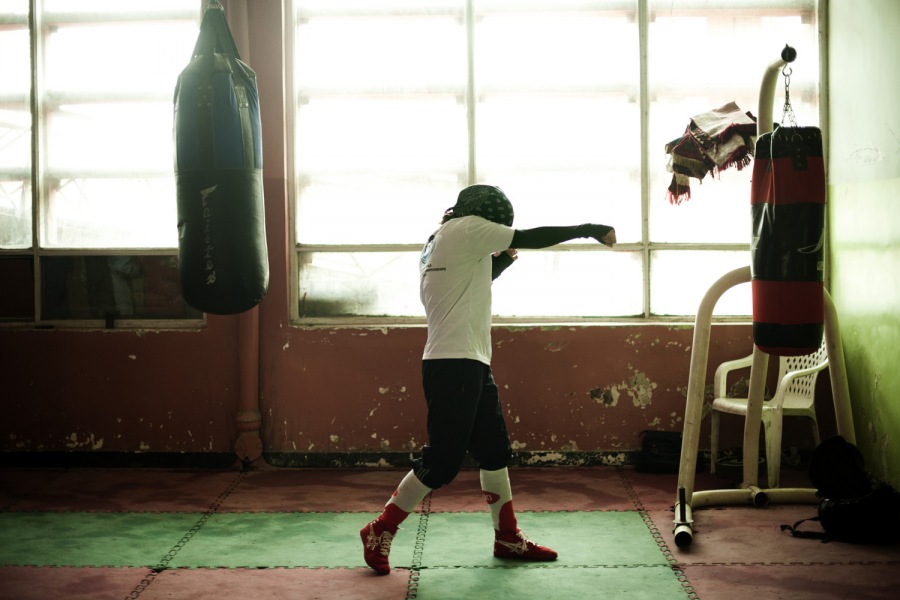 The fighter from Jersey was back two weeks later. He came in with Dennis. Mickey was sitting in a chair, holding a cold cigar in his teeth, trying not to scratch his arms. He was just back from the Pocono Mountains, poison-ivyed half to death. He’d gone there for squirrels. Mickey has been hunting since he was seven years old—ever since he went after stray cats in the alleys of South Philadelphia with a baseball bat. As he gets older, though, he gets gentler, and cares less about the shooting and more about just being outside. This weekend, as a matter of fact, he’d left his gun in the cabin.

“This same path, I must’ve walked it a hundred times,” he said. “But this time, I was just walking along, and you know, there’s apples in all those trees. Millions of them. I been through there a hundred times, and I never saw the apples before . . .”

Dennis bent over him then. “Hey, Mick, 1 told this guy you’d give him two or three rounds,” he said.

The fighter dressed and wrapped his hands and then got laced into a pair of black gloves. He loosened up five or ten minutes, then fit his mouthpiece over his teeth and climbed into the ring.

Mickey slipped his unwrapped hands into an old pair of pull-on gloves and got in with him. He doesn’t use a mouthpiece or headgear. He was giving away twenty-five pounds, and twenty-five years. “Three rounds?” he said.

The fighter said, “I don’t know if I’m even in shape to finish one.” Mickey has been around gyms all his life and knew better than that.

The bell rang and the fighter came straight at him, throwing right hands and hooks, trying to hurt him. Little Mickey sat down a yard from the ropes and watched.

Mickey took the punches on his arms and gloves and shoulders, moving in and out, relaxed. A minute into the round, he threw a long, slow right hook at the fighter’s head, which the fighter blocked, and a short left under his ribs. Which he never saw.

The punch stopped the fighter cold. For two or three seconds he couldn’t breathe, he couldn’t move his hands. In those seconds, Mickey could have ended it and gone back to his chair and let him go. And when the fighter could breathe again, he began to find Mickey with some of the right hands.

The gym was quiet, except for the sounds of the ring itself. Mickey and the fighter seemed even for a round and a half, but somewhere in it the fighter got stronger. He used his elbows and shoulders; Mickey gave ground and landed some hooks to the side, but his punches didn’t have much on them.

Between rounds Mickey walked in circles, breathing through his teeth, looking at the Boor. I thought about being fifty-one years old, working all day pulling transmissions and engines, and then coming upstairs with bad shoulders and poison ivy and having to fight life and death with some kid who didn’t even know who you were.

The third round started, and the fighter, if anything, was throwing harder now. Mickey let the punches hit his arms and sides and glance off his head, moving in the direction they pushed him. One of them scraped some skin off his eyebrow.

The fighter followed him, forgetting what had happened to him in the first round, forgetting that Mickey hadn’t hurt him when he was helpless. And then I heard little Mickey say, “He’s got him now.” I looked down at him to see how he knew that, and by the time I looked back up, Mickey was hitting the fighter with twelve clean punches in a row.

For the last minute and a half of the fight, Mickey hit him with everything he threw. When the fighter tried to come back at him, it opened him up for something else.

At the end, he had stopped fighting and was leaning against the ropes covering up. Mickey patted the fighter on the head, climbed out of the ring, and worked two hard rounds on the heavy bag, jumped rope, and then put a cigar between his teeth and did sit-ups, looking happier all the time.

I said to his son, “He shouldn’t have to do that.”

Little Mickey said, “Yeah, but you know my father. He liked the challenge, having to do it…”

I looked around the gym—a clean, honest room with enough windows so you could feel the street—and as nice as it was, that’s what it was for. Having to do it. Not every day or every week, but if you’re going to box, then once in a while it’s going to happen.

And Mickey doesn’t own the place by accident. Now and then you’ve got to let the dog out of the house to run.

Driving home from the gym that night, I told him I wouldn’t have patted the fighter on the head, no matter how grateful I was that he tried to kill me.

Mickey said, “Yeah, I should have bit him.” His mood was getting better and better. He looked down at his arms, though, touched his neck where the poison ivy was. “Five days,” he said, “before it goes away. I lie in bed at night, thinking about scratching it or not.”

“The doctor said they got some kind of shot, it gives you the worse case you ever got, and then you don’t get it anymore. You can’t take the shot when you already got poison ivy, though. You got to be cured, and then they can give it to you, and then they can cure you. Probably.”

He shook his head. “There’s nothing you can do about poison ivy,” he said, “but stay out of the way.”

He dabbed at the scrape over his eye. “And what good is that?” 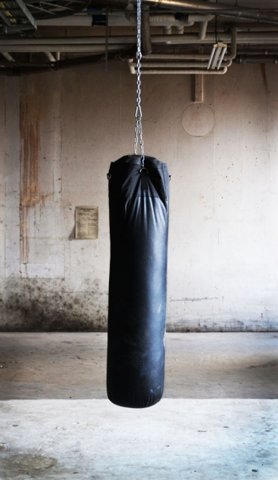 I enjoyed this, thanks!

Of course. It's a keeper.

This passage has a lot of the same feeling as a boxing scene in Brotherly Love. The way Dexter described Nick DiMaggio and what it took to build something, the gym, the garage -- it's the best passage I've read showing what it means to be an honest man in fiction or non-fiction.