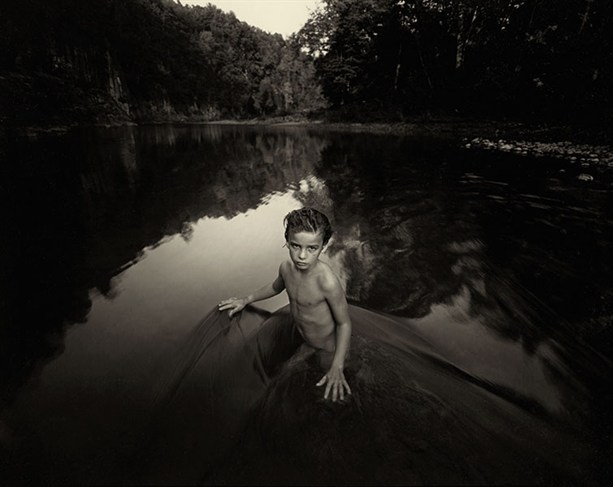 Another beaut from our man Dexter. This one originally appeared in the Philly Daily News on June 2, 1980. It is collected in Paper Trails, a must-read if there ever was one, and is featured here with the author’s permission.

The year I turned 5 my family moved to a little town in central Georgia called Milledgeville where my father taught physics at the military college. Our house was on a red clay road, next to a pine woods and a saw mill. The plums came off the trees hot from the sun, and I had a cocker spaniel puppy that followed me everywhere I went. And nobody wore shoes all summer long, except to Sunday school.

The puppy was almost grown when he was killed. A city garbage truck hit him and left him where he stopped rolling, beside the road on a hill half a mile from the house. I heard about it from a kid named Kenny Durkin, who was the kind of kid who would spend half the afternoon looking for you to be the one to tell you your dog was dead.

He is probably working for a newspaper now.

Anyway, Kenny found me down at the saw mill, walking around the inside edge of a round cement building where they burned scrap wood. The building had a clay floor, dug out into a pit, and if you fell off the edge that’s where you ended up, in there burning with the wood.

My friends and I went there once or twice a week and waited for the watchman to chase us out. We wanted to see it when he fell off the edge.

Kenny Durkin stuck his head into the open door and yelled at me. “Peter,” he said, “the city truck done run over yer dog and kilt him dead.”

We ran from the saw mill to the hill where the city truck had left my dog, stopping every now and then for Kenny Durkin to get his breath. I was scared and excited at the same time – I’d never seen a dead dog before.

By the time we got to place on the hill, the sun had baked one side of the dog’s coat so hot you could hardly touch him. The flies were all over his ears and eyes, and I brushed them away and picked him up. He had never seemed so heavy before. I told Kenny Durkin to go away.

I carried the puppy up the hill, stumbling under the weight. I fell in some stones, and he rolled into the ditch. I pulled him out by a leg, and there was a trail of blood and bubbles where his mouth had slid along the ground. It was cool in the ditch and I thought about leaving him there, but there was something worse in that than in what had already happened.

I picked him up and started for home again. I moved him from one shoulder to the other, trying to get rid of the ache in the muscles. But the ache got worse and worse and the next time I fell I couldn’t pick him up again, so I
dragged him home by the leg.

And I was crying as much from the ache as for the dog.

A neighbor woman came out from behind her screen door and told me to leave the puppy out in the street. “Come on in and have some ice tea,” she said.

“Your daddy’ll be by directly.”

But I was dizzy from the heat by that time, watching my feet move, one in front of the other against the red Georgia dirt, and I didn’t answer.

I didn’t have anything to say, and I had something to do. And a long time went by before I got the puppy home.

I remembered all that last week. I was driving some back roads near Elmer, N.J., when I came on a kid carrying a dead dog.

He was older than I had been – he might have been 9 or 10 – but you don’t pick the times you grow up, they pick you. The dog was a mongrel, maybe 35 pounds, and the kid was trying to balance it in front of him on the frame of his bicycle.

He’d pedal a few yards, then the handle bars would get away from him. He’d reach up to steady himself and the dog would fall off onto the road. I stopped the car behind him and asked what had happened.

“He got run over,” he said. The dog was lying at his feet and boy couldn’t control his voice any more than the handle bars. Everything was falling apart all at once.

I said, “Maybe I can help you get him home.”

He said, “I can do it.” He picked up the dog and lay him across the bicycle. The eyes swung in the air. The boy got back on the bicycle and tried again, the dog fell off again. “Oh, Goldie,” he said.

The kid kept his face away when he answered, so you couldn’t see him crying.

“Close enough to walk? ” He nodded, still keeping his face away. I said, “Then hold her on the bicycle and walk her home.”

The kid put his dog across the bicycle, held her there with one hand and began to walk toward a red and white farm house a long ways down the road. From the back you could see the crying take over his body. Maybe if I’d asked him again, he would have let me drive him home.

But I didn’t ask.

He was finding out about himself, and tonight, after the dog was buried, that would be all he would have to take her place.

In the past month I have had to put down two Labs and carry my neighbor's dead Corgi up from the creek.
At 58, you still are finding out plenty about yourself at times like these.

1) I'm so sorry to hear that. This story was hard to get through even though it was short. It hits close to home.

Want to tell you what an incredible job you're doing bringing top-shelf writing to your site. It's an absolute pleasure to read

3) My pleasure, man. I'm honored to give a home to fine writing.

If you are going to work so hard to post, I have to make more time to keep up.

As for this gem, Sally Mann shot the image. Pretty cool, I'd say.