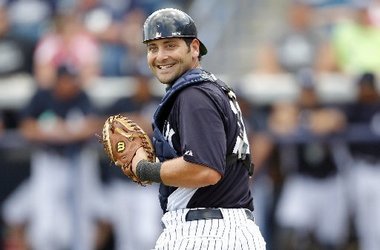 When Nick Swisher took his high on-base-percentage and shit-eating grin to Cleveland he left the Yankees with a personality complex. That is, they are now without a goofball, whose enthusiasm, which in Swisher’s case I believe is sincere, people either find appealing or irritating. I tolerated Swisher’s schtick though didn’t think he was funny or interesting. I liked him as a player, though, and so while I thought he was an ass I didn’t think he was a phony and you’ve got to let people be who they are.

Juan Rivera and Kevin Youkilis, well, that is nobody’s idea of charm or good cheer, though Youkilis does have a droll sense of humor. What the Yanks are left with is their one-time mascot who was banished to the minor leagues last season: Francisco Cervelli. You may have heard, he’s the Yankees starting catcher. Now, it doesn’t matter how this adds up in making the Yanks a better team, because it gives them a cheerful pain in the ass,  a guy sure to make us smile on occasion because he enjoys his job and a guy certain to piss off the opposition.

And there’s some value in that.

Liking the guys, finding them watchable, and wanting to root for them comes first in my book.

It just happens I was born into Yankee fandom and get to enjoy a lot of winning as well.

That's what really made the late 90s run so special for me. Paulie, Scotty, Tino, and of course the Kore Fore -- you liked these guys.

And how can you not feel that way about Frankie Brains?

For me, Cervelli's charm wears off the more he plays.
I'm not hating on the guy, he's likeable enough, but I'd rather have a red ass catcher who can hit. I unfairly judged Russell Martin against the same standard. Posada and Munson are my kind of catcher.

I liked Jorgie as a hitter but not so much as a catcher. Liked Martin far better defensively. He's tough, too, but a pain in the ass to watch hit. I suppose Thurman was tough on both sides, though ultimately maybe not quite as good as hitter as Posada.

You can bet Cervelli's goal is to some day be mentioned in the same conversation with Munson and Posada. And this is his year to prove he belongs as a starter. So I'm hopeful we will see some inspired play.

Gardner, Phelps, Nova, lots of guys have that mentality this year. Could be fun to watch. And that illustrates one of the many reasons why Veteran Worship Syndrome can produce a less than ideal team regardless of talent. Young guys like this are hungry. I'm not saying Cervelli might not still suck.

Not sure I buy the young guys are hungry, wealthier veterans aren't. I think Jeter is still plenty hungry. Same with Andy and Mariano. I know what you are getting at--and I think those young guys are driven--but that's a cliche that has always seemed too pat to be trusted.

Johnny Blanchard was a third stringer, and better than any of these guys.

I like young guys and old guys. It's not that I really think they try harder than the guys in the middle, but it seems to me the game is harder for them. They're either trying to figure out how to use their talents to develop a real game, or then are figuring out how to adjust their game to a decline in talent.

As for the discussion, Alex has Swisher correct, leaving out the chew, his Reggielike non chalance in the field (Francona will adore that) and his gorgeous wife. Won't miss him, despite the loss of his hrs. The Thurman reference cannot be tested due to his tragic death, but remember, he caught for only 11 years and might have become a better hitter if he played OF and didn't have to catch.

Never thought Paul O'Neil had personality until he went on the tube. Dry, as were the rest of them.

But, how can there be a discussion about Yankee personalities, especially the ones who caught and leave out Lawrence Peter Berra! He ranks 26th on SABR's all-time 100 greats, behind only John Bench. And, he was a character for sure, not to mention a great manager.

[1] I too was born into Yankeedom, probably way before most Banterers. I grew up with winning, but loved the losing even more. People used to come to me and say they felt sorry for me, because the Yankees were losing. In those days, I checked the box scores for the names of players I had not heard of, many of whom I have forgotten.

Ever hear of Fred Talbot, the pitcher. He was traded to the Yankees for Gil Blanco, Roger Repoz and Bill Stafford. Hit a homerun on May 8,1967 in a game against the Angels, which he started and lasted 6 innings. Whose the last Yankeed pitcher to hit a dinger? I dunno. Dick Howser played 3B and The Mick played first. That's what I am talkin about.