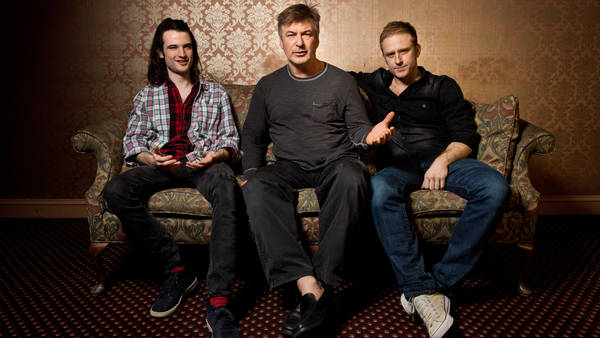 “Orphans” is known as a very dark play. What do you make of audiences laughing?

Baldwin: I had gauged in my mind that a third of it was funny and two-thirds of it was odd and tragic and dramatic. We go out for the first preview, and it flips. It’s suddenly two-thirds funny and one-third dramatic. Which I was very unprepared for.

Foster: It’s still being massaged. What we all agree on is: The performances have to come from the heart. If the laughs happen, the laughs happen. But we’re not catering to that. It’s easy for me to ride the wave of laughter, hook the audience and ride the laugh, but I’m not doing that here. The spearhead will become sharper.

Baldwin: Part of the challenge is the era of the play. In “Orphans” you have me saying to a young guy: “Come on over here, son, you’re a good boy, let me encourage you. You want some encouragement? Let me give you some encouragement.” Back then this was straightforward dialogue, received by the audience without much irony. Today it’s a gay and sitcomy world, where innuendo is seen in everything. We asked ourselves, “How do we say those lines and stay with it,” because there’s no gay subtext to what Harold is doing. But at the first preview people snickered at that.

Foster: [mutters to himself] Why are they laughing at that?

Is there anything you can do to deal with the audience snickering?

Baldwin: You just play the lines straightforwardly. And you focus on your intention. My character grew up in an orphanage, and he’s determined to give these two other orphan boys a chance.