Breaking Bad: We Mock the Thing We Are to Be 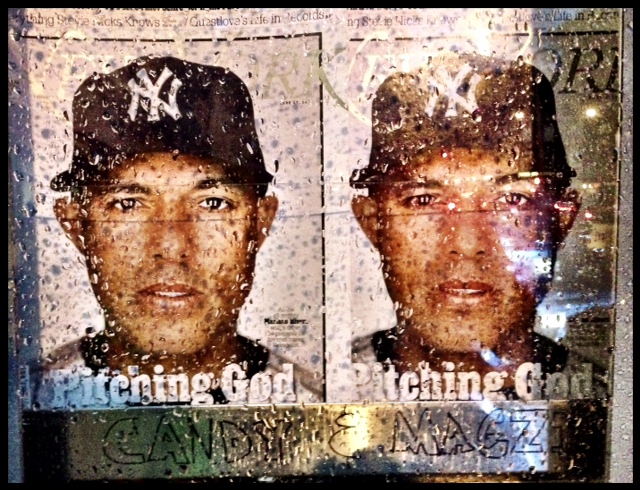 One of Mel Brooks’ 2001 Year Old Man bits had him saying that we make fun old an old guy who is bent over and spitting and pretty soon we’re bent over and spitting. I thought of this tonight when the Yanks lost in 18 innings to the A’s, 3-2, because just last weekend the Mets lost in 20 innings. I didn’t take pleasure in the Mets’ misery, necessarily, I was just relieved it wasn’t happening to the Yanks.

The only relief I got from this game was that I didn’t see a pitch of it. I followed the early innings on Game Day, and hours later, followed it some more from my phone after Em and I finished dinner at a restaurant downtown.

“They’re still playing,” I said to the Wife. We got soaked on our way to the subway, which is when I took a picture of the Mariano Rivera New York Magazine cover at a newsstand (pictured above)

And they were still playing when the 1 train got to 125th Street. I put the phone away and didn’t bring it back out until we approached Dyckman. I asked Em if she had a good feeling. She hesitated to say anything and half-smiled which was her nice way of saying she didn’t have a good feeling.

Sure enough when I checked the phone again the Yanks had lost by a run. Upon further inspection it was worse–Mariano was on the hill when they lost. I cursed and gave a short, quick punch to the empty seat next to me.

Then came texts came from friends: “Brutal,” “Stab Me Now, Please,” “Way to Ruin the Day.”

Here’s what made it better. As my anger rose I looked up at the young, scraggily-looking couple sitting across from us. Mid-twenties, I guess. Chick has long blond hair and is reading an old paperback copy of a Herman Hesse book. Dude has long hair too. And he’s talking about the world, about politics, about Serbs and Turkey. He’s not just talking, he’s pontificating. Loudly. Finally he puts his head back and closes his eyes and says, “I’m not saying we should all get along but why can’t we all just hang out and enjoy the fruits of our society, man?”

I look up from my phone at him. The Wife squeezes my hand and whispers, “Easy.”

The train stops, we get out and laugh. That help take the sting out of a dispiriting loss for the Yanks.

No, rock bottom is when they get their asses kicked in Anaheim this weekend.

And that was before today's 0-8. This is the player the premier franchise in MLB chose to sign---the player they deemed better than anyone in their organization. And that is just one of an array of problems.

I have tickets to the last game of the regular season. The sting of every loss is numbed by my desire to see the last pitch Mo ever throws.

Rock bottom? Uh, actually, they are nowhere near it. The Yanks are 37-29. Three games down in the loss column in the AL East. About the 8th or 9th best record in all of baseball.

Sure getting swept by the A's, and the way they got swept is particularly unpleasant, but let's not get carried away.

A couple of good series, and we're in 1st place again.

Stop with the whining, please.

Yes, a couple of good series and they may be back in first. More likely is that the luck runs out and their record regresses to mean.

They are 19th overall in runs scored. 22nd Overal in Batting Average. 21st overall in OBP. 19th in Slugging.

Their pitching has saved them so far.

Going forward, I can't expect much from Jeter. Or A-Rod. or Granderson. So it falls to likes of Overbay, Wells, Youk and Hafner.

I think the pixie dust is wearing off of them.

Also, the pitching has been outstanding for most of the year.

I checked out after the 13th inning so I missed lots of free baseball, luckily. Oi! For anyone with cable tv the Sundance Channel is about to start The Warriors. So there's that. ; )

[6] Can't argue with that, but I am going to remain optimistic. It's all I can do.

[6] I kinda doubt Pythagoras himself could see Cashman and Joe letting that happen without making some serious roster moves. Unless someone gets injured, I conjecture that they're playing out this road trip and trying to remain reasonably above .500 before they make any planned tweaks, during which time anything can happen. It's better than George's approach was (firings/demotions on the road) which is exactly what the Mets did a few years ago (which led them nowhere). If nothing else, you should continue to keep your expectations low for wellness and sanity's sake and enjoy the beauty of Mo's presence in the game in that too soon we shall never see such as him again.

If we've already determined that the Yanks will fail, what's the big deal? The bigger issues will then be determined this coming off-season. If this is to be 2008 all over again, well... 2009?

does anyone seriously see Boston, Tampa, or Baltimore running away with this division?

Every single person here would've signed up for 37-29 and 3 out on June 14th. Every. Single. Person.

signed up for that on Opening Day, I meant to say