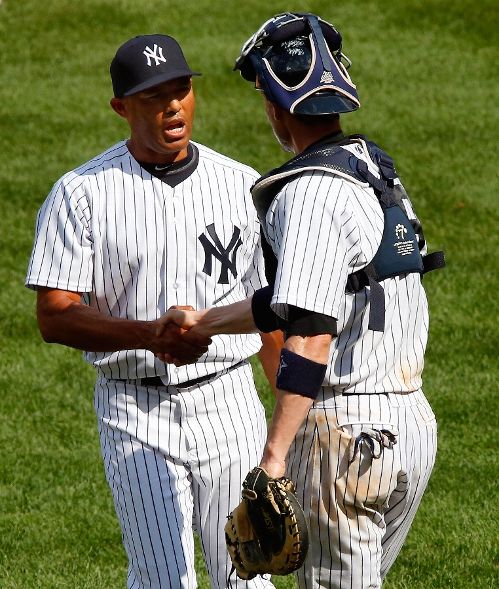 Amidst all the unpredictability and chaos that has welled up this season, Saturday afternoon’s game was stunningly normal. It was a game we’ve all seen thousands of times, and there was something soothing about it, like a tall glass of lemonade on a hot summer day.

As it started out, it looked more like lemons. Andy Pettitte was on the mound for the Yanks, and he retired the first two batters quickly before giving up a single to left by Adam Jones. As Chris Davis dug in at the plate I wondered if there had ever been a hitter whose reality differs so much from the perception. Davis’s name and appearance are as plain as Peoria, but when his bat lifts off his shoulder he’s suddenly as dangerous as Detroit. After working the count full, Davis produced a high fly ball that concerned no one — not Pettitte, who stood on the mound patiently, not Michael Kay, who calmly described the lazy arc of the ball, not Brett Gardner, who cruised calmly back to the wall in center field, and not even Davis himself, who shook his head in disgust as he trotted out of the box. But then a funny thing happened — the ball just wouldn’t stop carrying, no doubt because of the 100° air, until it landed a few feet over the wall for a two-run homer.

The Orioles scored a third run in the second inning, and this one was also questionable. Nolan Reimold dribbled a ball down the third base line, and Pettitte had no option other than the Jeter Jump Throw™. But Pettitte is not Jeter, and the ball ended up down the right field line, allowing Reimold to make it to second. Alexi Casilla doubled two pitches later, bringing in Reimold and his unearned run.

The old Yankees — and by that I mean the Yankees from a week ago — would have curled up into a ball when faced with a 3-0 deficit against Chris Tillman in the top of the second, but these are the New Yankees! Travis Hafner led off the bottom of the second with a walk, then crisp singles from Zoilo Almonte and Lyle Overbay loaded the bases with none out. Luís Cruz then looped a base hit just in front of Reimold in left field, and the Yankees were on the board, 3-1. Eduardo Núñez stepped to the plate for the first time since May 10th and responded with a sacrifice fly to give the Yanks another run, but Overbay foolishly tried to advance to third on the play. He was thrown out easily for the second out, and the rally was essentially over. Chris Stewart made it official when he struck out looking.

The O’s picked up another run in the fourth when Taylor Teagarden cashed in a J.J. Hardy double to make the score 4-2, but the Yanks came back in the fifth with their new station-to-station offense. Núñez and Stewart opened the inning with singles, then moved over to second and third on Gardner’s sacrifice bunt. Ichiro flipped a looping liner over the mound that was flagged down by Brian Roberts at second; as good as the play was, it saved one run, not two, and the Yanks were within one at 4-3. Canó was up next, and he dumped an excuse-me single in front of Reimold to bring home Stewart to tie the game at four.

Pettitte rolled through the sixth, and the Yanks played some more small ball in their half. Overbay picked up his third hit of the game to lead off the inning, then moved to second on Cruz’s bunt, setting things up for Núñez to be the hero in his first game back. Nuney took the first pitch for a strike, then grounded the next one up the middle for a base hit. When third base coach Robby Thompson sent Overbay chugging around third to challenge Jones’s arm in center field, I was certain it was the wrong decision, but Jones’s throw was a bit up the line and Overbay scored the go-ahead run.

Nothing else really mattered except for the ninth inning and Mariano Rivera. If you look at the play-by-play, you’ll read about two ground balls, a single, and a strikeout, but that hardly tells the story. J.J. Hardy, Nate McClouth, Ryan Flaherty, and Chris Dickerson were all so overmatched that they couldn’t have been faulted had they each asked Rivera for his autograph before leaving the field. Hardy looked at one pitch, then squibbed a ball that barely made its way out to Canó, who flipped to first for out number one. Pinch hitter McClouth then hit another ball out to Canó, this one so soft that the play at first was close. Flaherty managed a base hit, but only because Rivera’s cutter so overwhelmed him that even with a full swing the ball only travelled about ninety feet before fluttering to the grass like a wounded bird in front of second. No matter. Rivera struck out Dickerson on three pitches to end the game. Yankees 5, Orioles 4. Same as it ever was.

It was Rivera’s 29th save of the season (and his 72nd save of a Pettitte victory), putting him on a pace for 54, which would be his career best. Here’s what I wrote about Rivera back on May 9th after he recorded his twelfth save:

Here’s something to watch for. It’s early, but the way this team is constructed, it wouldn’t be a surprise if Rivera actually topped his career high of 53 saves from back in 2004. Then he’d walk off into the sunset with a Cy Young Award, just like Koufax. Wouldn’t that be poetic?

The Cy Young Award seems less likely at this point, but here’s something else that would be poetic. After Saturday’s game we found out that Rivera had been named to the American League All-Star game, but that’s not good enough. Mariano Rivera should be the starting pitcher for the American League. I’m not the first to come up with this idea — I seem to remember Michael Kay suggesting this for the 2008 ASG in Yankee Stadium — but this would be the perfect year to do it.

There’s no need to have an actual starting pitcher start the game, since most pitchers only throw an inning or two anyway, even some of those who start the game. (Max Scherzer would be the starter most likely to start, but Detroit manager Jim Leyland has already indicated that Scherzer probably won’t be available to pitch that day.)

Rivera is having a phenomenal season and could end up with the highest single-season save total of his career. There’s no real guarantee that he would get into the game in the ninth inning, nor is there any guarantee that those final outs would be meaningful. So why not send him out to start? It might seem counterintuitive to have Rivera, the greatest closer of all-time, appear in his final all-star game as a starter (and Rivera might not even want to do it), but what better way is there to honor the greatest pitcher any of us will ever see?

I very much enjoyed reading this write-up. Thanks. This was another fun game to watch.

Mo - saves before the A-S break:

The Angels just scored four in the ninth to tie the sox at 7. The tying run scored when the 3b air-mailed the throw to 2nd on what should have been a routine 5-4 for the 3rd out. lol... Amazingly, Scioscia had a puss face.

And Hamilton, who made two terrible fielding gaffes tonight, CRUSHES a 2 run blast to win it in the 11th. Everyone goes home happy.

Lazy, hot Sunday afternoon here, just getting the game turned on. Sounds like (3) may be worth a look too. Glad LAA beat Boston but Scioscia is so annoying.

For the record that was Alexi Casilla, at 2B, who stabbed Ichiro's drive up the middle. The dude is a walking highlight reel in the field, so let's give him his due.

[5] That's the understatement of the year brother Jazz, it's an absolute foinace outside: 91° F in Tokyo, gents.

I'm going out to buy another fan.

[7] Feels hotter than that actually..91F isn't that bad. Though my house when I got home today easily was over 180F, forgot to open the windows the morning, D'oh!

"How can you have any pudding, if you don't eat your meat?"
Having Mo start the AllStar game is like starting Mass with communion, or serving ice cream before steak, or making Springsteen the warmup act to a teenage garage band.
I appreciate the reasons for wanting to have Rivera start the exhibition, and the novelty of the occasion, but it just goes against the proper order of things. Sunrise, sunset. Wedding, honeymoon. First pitch, middle innings, 7th inning stretch, uneasy moments, then, finally, if you're lucky, Enter Sandman. That's just how it works.