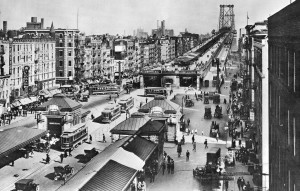 A week or two ago, Alex posted a link with a picture from a site which had an interesting picture. It was suggested in the comments that I might be able to solve the mystery of which Hudson River-crossing bridge was featured in the process of being built a fairly long time ago, owing that I grew up in the Hudson Valley I suppose. After some quick research, triangulation, divination, a helpful clue from RIYank and a toss of the quarter, I surmised that it was the George Washington Bridge. It was a fun bit of detective work, and going off of a suggestion in the comments I asked our Fearless Leader what he thought of the idea to presenting similar challenges as a new feature on the Banter. His response: “You’re hired.”

With that in mind, let me present to you a geographic puzzle and see who among you can correctly identify the location and date of this picture. This one should be fairly easy for some of you as you may recognize a thing or two in it. If you can identify the main street and the structure it leads to, plus the year the photo depicts, you win the Internet for a week. Feel free to utilize the vast repository of cyber-knowledge that is currently at your fingertips for help while I figure out how to turn this into a regular feature (I’m open to suggestions, but not hypnosis).

Photo credited to the book New York Then & Now from the website Ephemeral New York.

Is that the Williamsburg or the Manhattan Bridge?

The kid from upstate is going to guess Brooklyn bridge, 1897, and no clue on the street. I might just keep trying this until I get it right. :)

I guessed and it can't be the Brooklyn Bridge. And I didn't even answer half of the question. Back to the drawing board.

cool! i like this new feature. not sure i have enough research time today but this is a nice challenge.

I agree with Alex...that's the Williamsburg Bridge. The span is exactly the same today (Manhattan Bridge looks far different). And I'm not sure Canal Street had a trolley, so that looks like Delancey. And, in an ingenious bit of detecting, I blew up the pic and there is a hand-written tag on the bottom right that says "Williamsburg" with the rest scratched out. Tada! ;)

I'm convinced it's the Williamsburg Bridge and Canal Street. Noticed 2 signs for Dentists on the south side of the street, one on the north side. But have no idea what year it was taken.

I am assuming you can't use the internet to solve this? Cause I already did as a knee-jerk reaction.

Well, it's definitely the Williamsburg, because that was built as a railroad bridge, and that's clearly what this one is. But no root beer for that one because it's already id-ed.

I'm thinking the cars show that it's well after 1900. I want to get the date closer than that, though.

I'm guessing that's it 1919 by the posture of the bystanders and the gait of the pedestrians (which you can calculate from the shadows). Very much in keeping with how people carried themselves in post-war America, especially in the Northeast. Drungo Woodsbane wrote about this in "Alignment of Allies" which was much more successful than he figured it would be due to the misleading title.

This picture, looking at pretty much the same space from the other direction, shows no horses, and was shot in 1923; Chyll Will's picture has a couple of horses.

So that narrows it down. But not as narrowly as Jon "The Cheater" DeRosa did. The A-Rod of Bronx Banter, as he shall henceforth be known.

I think [10] should be the winning guess, that's pretty close and with sound reasoning. And nobody guessed the location correctly, since Alex hedged his bet and Green Man also saw the writing.

I think it's the Williamsburg bridge too. The tapered tower tells me that. I think it's about 1923, cause I think I see cars. And just to be fun, I think it's from the Brooklyn side of things.

[17] Yep, and me too with "copyright 1919" in the bottom right, which I found when I clicked on the photo to embiggen it about an hour ago.

The way copyright law used to work, you had to put "copyright " on the work in order to have a copyright, so sometimes it is easy to find out the year from old photos. Not so anymore, of course. [0] Chyll, for future posts, you might want to cover up any copyright notices, make it a little harder for us.

And it would be Delancey, right? Not Canal on the Manhattan side. Weird how the stanchions look like they're made of stone. That ain't the WB Bridge.

This feature really is absorbing. I just checked back to see if Will had posted another one yet :-)

I'll do one, if I can find a good one. It has to be at least vaguely recognizable to New Yorkers, but have some hard-to-pin-down features, and require some deduction to figure out. The two photos so far have also been intrinsically interesting pictures, too.

22) You let me know--anyone can do one if you'd like. Also, let's come up with a catchy name for the series.

Across the street and a block further away at the NE corner of Clinton, the building is still there. For comparison, a photo of that corner I took a few years ago. http://farm6.staticflickr.com/5267/5621487294_82aeca4934_b.jpg

Wowzers, great response! Looks like we have a winner here...

The answer is Delancey Street leading to the Williamsburg Bridge c.1919. congratulations to all who participated, especially those who shared more information with us about the neighborhood and its history. The purpose of the game has definitely been fulfilled; got your minds moving and figure-eighting and other maneuvers the mind is capable of, so I'm not even mad that Jon "De-Rod" DeRosa peeked; essentially he did what anyone should do and look for clues; he was clever enough to spot the mistake I made... Or was it a mistake? >;)

I'm declaring everyone the winner on this one; obviously there are certain ground rules we'll settle into to make the feature fun, interesting, stimulating and inclusive of everyone who wants to join in. We'll talk it over soon. Thanks for playing, I think this makes a great addition to the Banter!

Jon wasn't the only one, but the way he tried to play it off deserved a tiny bit of ribbing >;) way to go, Banter!