Welcome back to another challenge with Where & When, where you follow sketchy trails to get finer details when you have the time to do so.  I have to admit, the last game was pretty interesting and generated a bit of feedback, so I’m inclined to keep that same format for the time being and hope that it will attract new players and get more people talking.  We’ve got a long, long winter ahead of us, so why not at least make it interesting?  Natch.

Oh, and speaking of sketchy, here’s an interesting sketch: 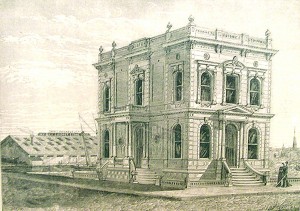 As I’ve mentioned before, this could be pictures of any type; this is probably the first time that I’ve had a drawing to use for a challenge, but the good news is the structure is still standing and in fact was landmarked within the last decade.  It is within city limits, so you don’t have to scramble too far for clues.  One last clue: there’s been a sort-of battle of wits with the community and a well-known business intent on setting up shop in the area that would likely prefer not having to deal with this structure, but is obligated to restore it under their present agreement with the owner.  They’ve done some work on it already, which is not half-bad, considering.

So as with last time, I am allowing answers to be posted in the comments so that we can generate a hearty conversation about the general area.  What I’m looking for is the name of this building (original or according to the landmark commission, which are fairly the same) and the date it was built, which I’m sure you will find if you know what the name of the building is.  An Appalachian for the first person with both answers and a Goose Island for the followers. Enjoy the game, I’ll try to hit everyone up this afternoon.  Oh, and by the way…

I’m introducing a new feature to the game that’s not necessarily part of the game, but an additional topic of discussion.  I hinted at it from the last game, but I’ve realized that time constraints have forced me to table this feature until later. However, that does not mean that you can contribute or anticipate it’s coming (the nature of my field predicts that I’ll have time in the winter season to fully introduce this part), but as a teaser, I will give you a sampling of what is in store. Again in the last game, the town that was spotlighted was Sleepy Hollow, NY, a place I am intimately familiar with.  I intend to feature places up and down the Hudson Valley (on both sides of the river, of course) to relate some interesting tidbits, history and points of interest.  Sleepy Hollow, in fact, has quite a lot of each; so much so that it would be impossible to do a quick post in just one game.  But I could highlight a particular feature and come back at another time…

The Legend Of Sleepy Hollow includes references to quite a few real places and people from Washington Irving’s time; the church, the bridge, Van Tassel and so on.  The route that Ichabod Crane traveled on during his ride with the Great Pumpkin, er, the Headless Horseman, is highlighted as a walking tour through the Tarrytowns (Tarrytown and North Tarrytown as it were) along present-day Broadway, which also includes a few other historic markers and locations related to the American Revolution and Hollywood royalty.  Then there’s also the waterfront, which also features interesting stories of it’s own.  I’ll get to all of these stories over time, but if you have any particular stories relating to those points of interest, feel free to share them below.  There will be more of these types of stories in the future. Talk with you all soon!

[Photo Credit: Pardon Me For Asking]

A toughie. I want to say it's the Benevolent and Protective Order of Elks, Lodge Number 878 in Queens, but that was built in 1921, and the couple in the sketch are wearing older style clothes. Plus the number of windows is wrong, it goes five across and here it's only three. I doubt a sketch artist, trying to to render a faithful depiction, would get that wrong.

The picture is an etching, not a drawing.
The scene is second half of the 19th century.

Something about it makes me think of Fifth Avenue before it was dense. That's just a feeling, nothing more specific.

But... that's all I got at first inspection. Toughie indeed.

From the clues regarding the recent landmark decision and the controversy surrounding it, I did a little internet hunting. I came up with the spot at 45-47 Park Place where the Islamic Community Center ("Ground Zero Mosque") was proposed. I seen recent pictures that don't really look much like it, but it was built between 1857-1858 in Italian Renaissance palazzo style. Which that etching could reflect, but I don't really know architecture styles very well. So totally came at this guess sideways from the clue.

I'm with RIYank - somewhere on 5th ave or Madison, but I can't seem to nail it down. I think that the lack of buildings around this one would eliminate the Islamic Community Center (and it's former incarnations). That area would have been fully built up by the time this etching was done.

Ugh...nevermind. I found the building on a related search and accidentally wound up on the photo credit site, which I had never heard of before. So I'm totally wrong. Have at it, kids!

Oh, I have it. I'll give the answer now and then reveal my trick after. (It's a very good trick :-))

It's the Coignet Stone Company Building, built in 1873.

[4] Yes, exactly. The name of the building is written along the top and it's legible, barely, in the etching!

You can read it if you download the picture and zoom way in. I didn't quite read it right -- I thought it was "Coigner". But Google knew.

It's actually on Third Avenue at 3rd St. It's a kind of showcase building for the company, in that it's made out of artificial stone -- concrete with a faux brick facing. I don't think it's possible to detect this from the etching -- the photo I linked above does have a kind of fake look about it, and plainly (supposed to be) brick.

The controversy involved Whole Foods, easy to Google up.

Nice detective work. I looked for any words, but i thought those were ornamental carvings of some sort.

[7] Apparently wikipedia does not have a full listing of all NY landmarks.

If I ever start an investigation agency, I'm hiring you guys. You're all tough nuts, seriously.

So the next question is, who gets the Appalachian?

Will, I didn't really get what the "new feature" is that you're introducing.

I haven't introduced it yet. It's a separate segment on points of interests in various areas around the Hudson Valley. For example, Tarry Town and Sleepy Hollow have quite a few points of interests like the church, Sleepy Hollow Cemetery (not affiliated with the church), Philipse Manor, Patriots Park, Sunnyvale, Kingsland Point Park and the like, not to mention a little history about the GM plant and it's many variations from inception to demolition and of course, the Tappan Zee Bridge. It's a lot of work, so I'll do maybe one or two of those at a time when I'm highlighting a town; and it doesn't have to be the same town in sequence. I could do Tarrytown, then Yonkers, back to Tarrytown, then Peekskill, Beacon, etc. At least that's what I was intending. The time it takes is the key factor. You have to give it up to Fearless Leader for all the work he does; I don't have a clue how he does it beyond pure passion >;)