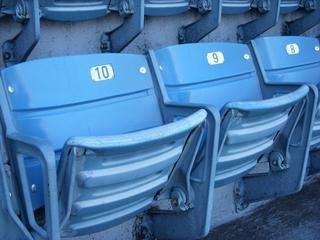 Yesterday was the fifth anniversary of Todd Drew’s final post for Bronx Banter. It was the last thing he ever wrote.

A few months earlier I talked to Todd about joining the Banter. Here’s an email he sent me on October 19, 2008:

Sorry for the length of this email.

I am very excited about the possibility of moving all my writing over to Bronx Banter. I just want to make sure that you know who I am.

I started blogging by accident. When Pete Abraham was still on Blogger and started making people register to comment I wasn’t very “tech savvy” and I didn’t realize I could have quit after setting up a password. I kept hitting next and when I was finished I’d set up a blog template. Since I did that I figured I might write something.

My wife thinks it’s been good for me. We’ve been together for a long time and she watched be burn out in newspapers and magazines. While I do a lot of writing and editing in my job at the ACLU, it has been different than living on two or three hours of sleep because there was always more reporting and writing to do.

Yankees For Justice has become who I am. It’s where I live and what I see and who I know and what I think and believe. I would love to bring that all to Bronx Banter, but I don’t want to lose anything and I don’t want to put you in a tough spot.

I went through and collected a bunch of posts I’ve done over the last two years. I ended up with a lot of links (sorry about that), but pay particular attention to the social justice section. I’ve written a lot about Sean Bell and brutal cops and city policies that go out of their way to hurt the poorest people.

Take a look at the George Mitchell stuff. I stand by every word I wrote about him and Selig in the weeks that followed that ridiculous “investigation” and “report.”

Read my posts defending Barry Bonds. Those got three separate death threats emailed to me.

Also, take a look at the pieces I write about soldiers, especially the kid who used to work at Yankee Stadium and came home from Iraq in body bag.

We were talking about Alex Rodriguez yesterday and you asked if I was Latin. I said I am not. A lot of people who don’t like that I defend Barry Bonds think I am black. I am not. But then again, maybe I am on both counts.

I am Latin and black. I come from China and Africa and the Middle East. I snuck across the border in the middle of the night. I picked cotton in Texas and processed meat in Kansas and laid bricks in Brooklyn. That makes me an American.

And I’m an American whose history doesn’t go back that far. All the family I know were poor farmers in the Tully Valley just south of Syracuse. They lost their farms in the Great Depression and became poor factory workers in Syracuse. I grew up on the Northside, which some people think is pretty rough. The cops call the neighborhood: Free Jail.

The factories started closing up years before I ever had a shot at a job so when I got near the end of high school I got my GED and took my military physical just like every other guy in my neighborhood. I was maybe a day or so from signing the enlistment papers when my baseball coach called and said the school’s art teacher needed to see me. One of the things I did in high school was work in the photo darkroom.

The local newspaper needed someone to work third shift and develop film and print pictures. I took the job and didn’t sign those military papers. I worked that job for a long time and eventually they taught me how to layout news pages and then they sent me out with a camera to take photos and then I did some writing, too.

Journalism has fallen a long way since then. It is full of rich folks with college degrees who have no interest in covering the people in this country. I once asked Jimmy Breslin if he could a newspaperman today and he said: “Fuck no. I couldn’t even get in the door unless they needed a janitor.”

He wasn’t kidding either.

On Yankees For Justice it says: I believe in baseball and an equally free, open, just society for everyone. That’s who I am and where I live and what I see and who I know and what I think and believe.

After you read these posts I hope you still want me around.

Now, and always, Todd  is our brother, in our hearts forever. He is the soul of the Banter, our guardian angel.

Amen indeed. Miss him a bunch. He'd be proud of what you're up to now.

I never knew Todd, never got to read/comment on any of his posts but he sounds like a truly special guy.

I'm glad we did the book for him.

Thanks for this Alex.

damn, five years. the man left his mark, that's for damn sure.

How some people have been convinced of the opposite is one of society’s great magic tricks. The Billionaire Boys’ Club can really shovel it. Actually, they even make poor people do their shoveling.

But Baseball’s Great Populist protects us in the Bronx.

I neglected to mention that Todd's way-too-soon passing finally got me off my ass to develop a will and health care proxy. Bless you Todd.

He was a special dude. 1) Thanks, Will. That means a lot.

Sad. Thanks for posting that email, Alex.

His final post was one of the most moving things I ever read. I remember balling my eyes out at my desk at work. He was a treasure. I loved the fact that Todd loved ballet. It shows such subtlety.

Thanks for posting, AB.

Thank you Alex. Thank you Todd. For keeping it real.

Right On. So great to see his work again.

"Lupica has covered this city for years and I’ve never seen him do anything in the Bronx but dash for his fancy car in the parking lot."

That is so awesome. You're the best, Todd.

Wow. Thanks for sharing, Alex!

I'll be bookmarking this and reading every last Todd article I may not have previously read.

I can't believe it's been 5 years... I had no idea the anniversary was last night, when I was rummaging through my computer drawer to find something I had scribbled on a piece of scrap paper. There are hundreds of random pieces of scrap paper in there. Most of them I just discarded as I continued my search.

Then I came across the Todd Drew quote I had written down 5 years ago to the day. It's the same one i mentioned in the comments from the above link. I read it aloud to my woman and, for the zillionth time, told her how wonderful and special Todd was is.

Whenever anyone who has bought my latest solo CD comments on track 2 - "Shadow Games" - I make sure to tell them that I composed it as a tribute to an incredible man who's generosity, strength and command of the written word was the inspiration.

I miss you everyday, Todd.

I also want to say that I've always felt beyond honored that Todd singled me out in his last public comment before heading to the hospital. It's difficult to describe how meaningful it is to me and something I don't take lightly...

Five years, wow. My daughter said to me yesterday "I can't believe it is Christmas - the years has flown by" and I tried to explain how it only accelerates as you get older. This post drives the point home - five years. Geez - where'd they all go? The Banter is a shining example of the good that can come from being online - the content, the people, the community. Top notch. Thanks for reminding us, AB. Lots of good reading to follow up on.