Hi folks, and welcome back to another rousing version of Where & When.  The year is coming to a close soon, which means I have some calculating to do; in the meantime I must warn you that the games may be slowing down soon for the holidays and for the fact that I need to find more places to cull challenges from; harder to find challenging pictures than you would think.  I also did promise some expansion of territory and insight on certain places; don’t think I forgot about that, but it does require time to do and this might be the best time to do such a thing.

With that in mind, let us glance thusly at this edifice: 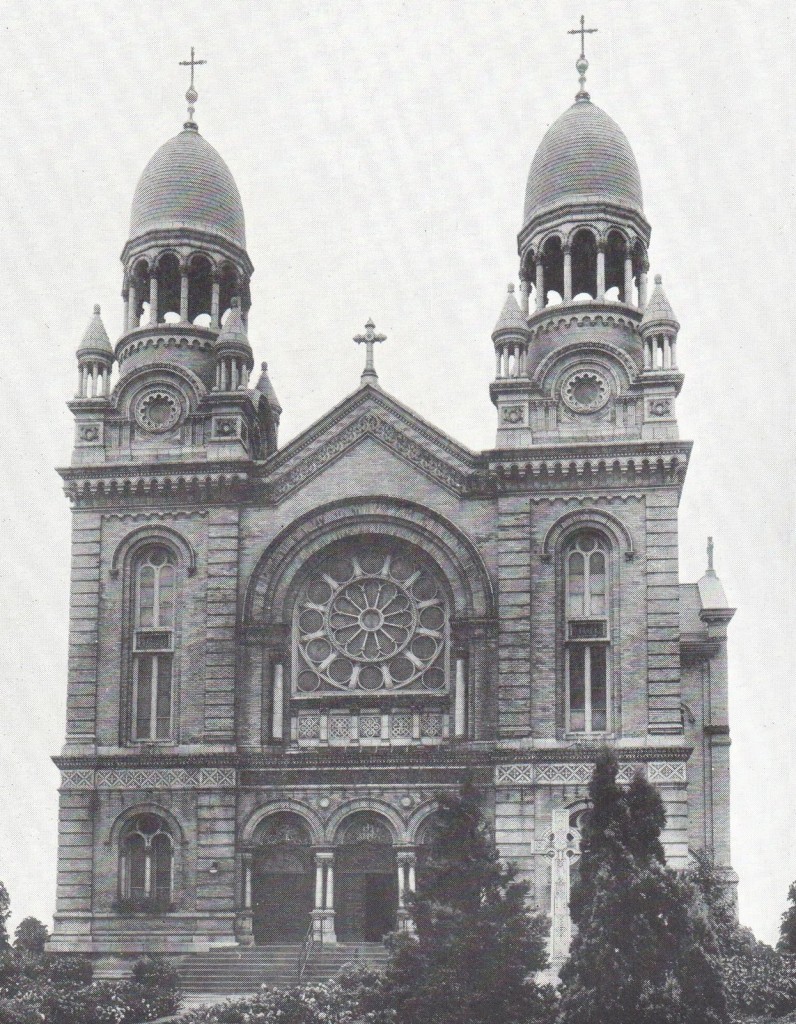 Imposing. Scary looking, in fact. Maybe not so much now; this is not the original version of the edifice, nor is it the current version (some modifications in the 60’s were made to conform to the contemporary standard policies on appearances), but interesting for two reasons: it is the first of its kind in this particular borough, and it’s located a half a block away from my first residence in the city; in fact my little strip of a street was an anomaly of sorts in that it had no true origin; at the least it was probably wiped out by urban planning and development in some years prior.

So there is a name and address for this building since it still exists, however since this pic is undated, I will ask that you give dates to when the original structure was actually built as well as the year of this redux and subsequent renovations.  I would offer a bonus, but it would be a dead giveaway, so I’ll just tell you that there is a bit of trivia connected to this place that might interest certain people; I in fact have at least one thing in common with the subject of this info.  That, or name the other street I referred to in my description above. Have I got some stories about that…

So, that’s rather vague, but this one is not really hard.  A tanker of Duffy’s Rowdy for the first with the answers, and a Foxon Park for the peanut gallery. Enjoy the game, I’ll get back to you soon and don’t click on that photo credit!

Isn't that St. Raymonds Church on Castle Hill in the Bronx? Maybe mid-sixties?

The towers are wrong, as is the city, but the large window with the archway over it reminds me of Notre Dame. That's all I've got so far . . . and a search of "new york church window looks like notre dame" has gotten me a Notre Dame church in Manhattan, and the Cathedral of St John the Divine (which this is clearly not - I know and love that place), so I'm striking out so far . . .

It looks an awful lot like The Church of St. Augustine on Franklin Ave in the Bronx between E167th and E168th. Same double spire look, but the number of windows on the photo I'm looking at from 1914 is different than the above photo. So either that's due to the renovations you mentioned (seems severe) or that it was just done in the same style (more likely).

So that's my guess, but I only halve about 5% confidence in it.

Hm, it doesn't look like St. Augustine, really. This is Renaissance, St. Augustine is Gothic. (Or 'neo', I guess.)

This will be hard, just from the picture. I'm going to think about Will's clues. I think you guys must be right that he's basically telling us it's in the Bronx!

Uh, I wrote that backward. The depicted church is Gothic, St. Augustine's is Renaissance revival.

The dominant architectural feature is the rose window. Does that help anyone?

Google keeps giving me St John the Divine and St Pat's, even though I'm using 'Bronx' as the first word in my searches.

[5] Hence my extremely low level of confidence in my guess. :) I'm sure you are right about the styles.

[5] Nope. And right now, the alternative I have is to just take the list of all churches in the Bronx and look at images of every one, which will both take too long and is not in the fun (or spirit) of the game.

This search did it:

[1] Bingo. Sure would like to know how you knew this; seems like you were in the area once.

St. Raymond's Church, 1759 Castle Hill Avenue, Bronx, New York. I don't know what year this picture was taken, but since MSM35 hit it right on the head, I'll buy that some time in the sixties is correct, although the website I cited says renovations occurred during the 60's to conform with the Vatican's latest standards. St. Raymond's Parish was the first Catholic church in the Bronx, the original structure was built between 1843-45, with the dedication to St. Raymond of Nonnatus taking place in the latter year. The structure you see here, which also serves as the current structure (with minor renovations) was built starting in 1897 and dedicated in 1898.

There's still time to answer the bonus questions, so I'll come back at 6pm to wrap things up and tell the story I intended afterwards. Good luck!

Actually I was in the Bronx yesterday and passed it. I grew up nearby so local knowledge comes into play.

Sorry I missed this one, been shopping with the parents all morning bleeding into midafternoon -- Christmas prep stuff, not even presents. Then baking cookies.

Don't worry about the holiday slowdown, I'll be busy all week.

So, here are the bonus answers... regarding the trivia concerning a connection with me and St. Raymond's Church (albeit very thin), St. Raymond's Church is also connected with St. Raymond's Cemetery, where some notable people have been buried over the years; among them legendary jazz singer Billie Holiday, who happened to have the same birthday as yours truly. A bit morbid, perhaps, but there it is.

The other optional bonus question was the street I also described in the challenge; the "strip of a street" with no origin. The only street that would fit that description in the vicinity of St. Raymond's Church would be Lyvere Street; a small one-way street that begins on the corner of Castle Hill Avenue and Zerega Avenue, shoots one way northeast and then hooks to the north.

I had a whole lot more to say about Lyvere Street in particular, but after writing it I realized this wasn't the right place for it, so I'm saving it for my personal blog (or even a FB post when I return from my self-imposed hiatus), so if you're interested, check back tomorrow on my blog (click on my name) and in the meantime, enjoy the upcoming festivities. Happy Holidays, all! >;)

Just a note. The ransom for the Lindbergh baby was paid by tossing over the wall of St. Raymonds Cemetery.

I stayed outta this one because I would have been straight-up cheating. St. Raymond's was my dad's church as a kid - parish elementary school, altar boy, nuns with rulers, the whole deal.

The cemetery is affiliated with the parish but not physically connected to the church property; it's down in the "crotch" where the approaches to the Whitestone and Throggs Neck bridges meet - and now home to my maternal grandparents, for whom, alas, no ransom will be thrown over the wall.

The cemetery is also adjacent to St. Joseph's School for the Deaf, which is in turn home to the nastiest, most beat-up field in the WestPut MSBL.

[15] No excuses, you could have played that card and won fair and square. I always allow, in fact I encourage personal experience for answers. Happy Holidays, my friend; on Earth and in Heaven >;)