Hello again! What, are you up for another adventure with Where & When? If not, come back in a few minutes for the answer, because our regulars would actually give Joseph Tacopina an ounce of shame (it is possible).  Today’s gambit is sponsored by my nephew Isaiah, who slept over last night as I wrote this post. He may or may not appear in future posts as I bring more areas to bear for your scrutiny (in the present, of course).  Meanwhile: 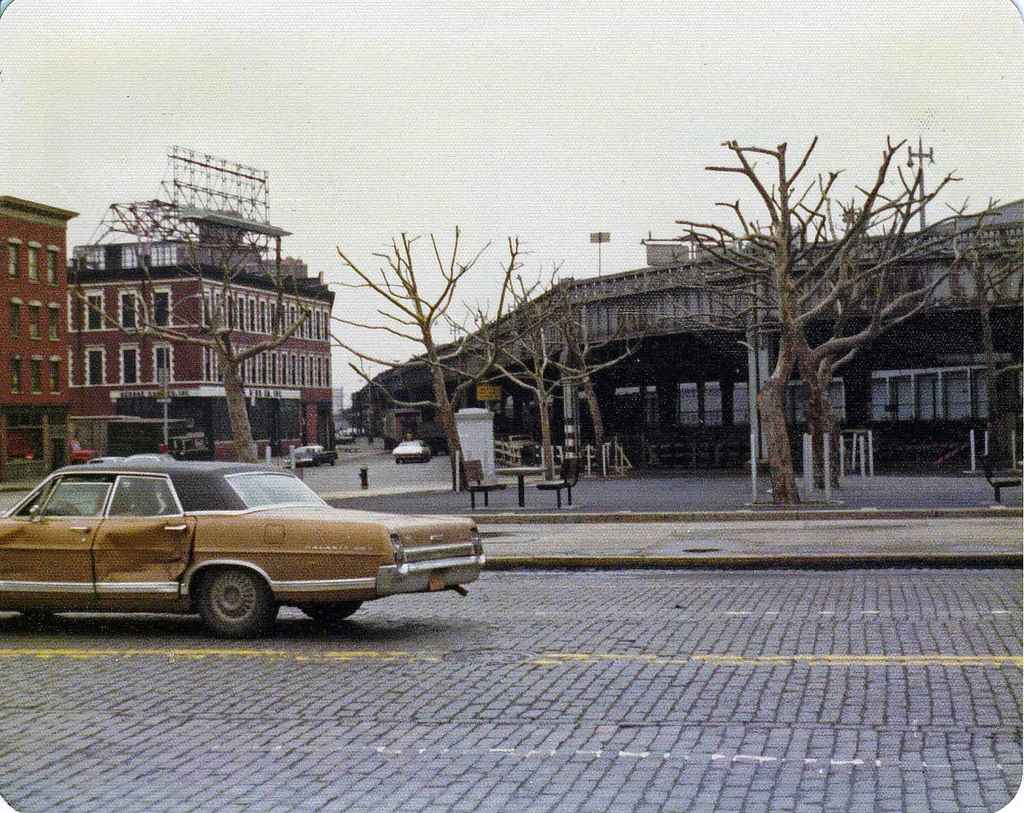 Ah, another break from the classics; and I bet this one has Fearless Leader very interested.  But I’m not going to make this one too easy. You can probably tell where this is, especially if you were around town in this era, but how many of you know about any of the other features in this picture? There’s quite a bit of interesting history contained here, so I’m looking for at least three features in this pic that have either a back story or something interesting going on today. The bonus question is what you know of regarding one of the features here that’s also become an institution in it’s own right.  You have thirty seconds, no, you have all morning and afternoon to figure it out and post your answer in the comments. I am curious to see how long it takes to find the Easter eggs in this one.

So, I’ll try to be back in the evening to sort out the mess here.  Good luck, and if you have any personal stories about this area, please feel free to share! And don’t peek at the photo credit or you’re fired (that’s nephew’s two cents).  Enjoy!

That sure looks like the West Side Highway, so maybe this is Chelsea. But Will says Belth might be particularly interested so, is it somewhere in the Bronx that just looks like the west side of Manhattan?

Yeah, the picture is just a little too grainy to pick out details that would make the id easier. But I'm pretty sure that if you went there today you'd see the High Line. (And the rest of the scene would look way different.)

The prominent red brick building is the (now closed) Chealsea Art Museum on w22nd and 11th, so yes...that's the old elevated West Side Highway there. Looks like mid-70's, so this was after it was shut down.

The CAM building was a rest joint offered by the Church Temperance Soiciety for longshoreman back in the day, offering an alternative to hanging out in saloons. Don't know how long it was used as that, but it was a Christmas ornament factory prior to the museum moving in.

That's all I got.

C'mon guys, you're almost two-thirds of the way there (I say almost because there's one more thing about the CAM building that bears mentioning.)

Hmmm.
[5] Once owned by Clement Clark Moore, who kind of invented Santa Claus?

Ford Galaxie. I'll accept 1973, but that car looks a bit used, and not just due to the smashed in door. 1977? There's also the brick street.

Elevated highway in the background, "brick streets new york city elevated highway" search leads to a different photo, but is it the meatpacking district?

[6] Good. Two-thirds. One more to find and explain. This might be tough unless you know the area.

I don't know the first thing about any aspect of the pictures in this game, but I really love chicken noodle soup. Any way I can get a cup of it simply for following all of the posts and rooting for the banterites?!

Is it that the park area between 23rd and 22nd there on 11th is now the Chelsea Dog Run Park?

[10] Nope, but if you look somewhere in the background...

Remember, if you've figured it all out, present the answers together in your post. And I don't know how many of you know the TV or film world, but if you know something, the third answer will lead you to the bonus.

[11] To be fair, it's only partially in picture, but use your geographic senses to figure it out. It's the one I referred to as "something interesting going on today"...

[12] thanks, chyll! i'm good with bottom of the cauldron chicken noodle soup : )

Okay, maybe my hints were still too subtle for consumption. We'll go over that right now in abc bullet points:

The general answer is The West Side Elevated Highway @ West 23rd Street & 11th+12th Avenues c. 1975. The area is along the western border of the Chelsea neighborhood, though some cutesy realtors will call it West Chelsea. There are two prominent features in this feature (aside from the beat up 1973 Ford Galaxie) and one more that's more subtle because it doesn't yet exist as what is is today, though the building is there.

A. The West Side Elevated Highway, was formally known as the Miller Elevated Highway, built in 1931 and named after then-recent Manhattan Borough President Julius Miller, who was instrumental in not only having the highway built, but also in the building of the Park Avenue Viaduct (The tunnel underneath the Helmsley Building and the roadway that encircles the south side of Grand Central Terminal) as well as the center strip along Park Avenue and the replacement of the Sixth Avenue El. According to Wikipedia, the highway was practically obsolete upon completion due in part to how it was constructed (too narrow for trucks, sharp curvy exits) and was so poorly maintained that it was shut down little more than forty years after it was built when (ironically) a maintenance dump truck and a passenger car fell through the bottom at West 14th Street. By that time it was already falling apart at the seams and debate had stretched for decades whether it was best to continue maintaining it (it was fully completed in 1951) or dismantle it. The debate was still raging when this picture was taken; by then, the highway was much like the adjacent High Line; an abandoned urban blight that helped set the tone and define the urban grittiness of a nearly bankrupt NYC. There is a picture of Andy Warhol standing with two bikers with Chelsea and the highway in the backdrop. A project called Westway, which was to be an underground interstate highway underneath the present highway was planned from 1971 and almost realized until environmental concerns scuttled the plan in 1985. Four years later, the highway was dismantled, but a small section of it remains connected from the ground by a ramp and extending from West 57th rising up to West 72nd Street and the Henry Hudson Parkway going north. (I did not know this; it explains a lot.) From there, all the various roadways underneath became part of the new West Side Highway, with the Yankee Clipper's name added ten years later (with speculation about that intention since Joe lived on the east side of town.)

B. The Chelsea Arts Museum building as it was most recently known, was built in 1850 on a parcel of land once owned by Clement Clark Moore, who's influence on the American image of Santa Claus is not unknown (though his opposition to the abolition of slavery and his ownership of slaves throughout his life largely is). This land was at the time at the edge of development of the expanding city (a phenomenon he also opposed); the area was subsequently named after Moore's estate, Chelsea. So that explains that. In 1915 the building was leased by the Church Temperance Society and used as a resting place for immigrant Longshoremen (and as an alternative to the saloons the Society opposed) who worked on the nearby Chelsea piers of the Hudson. The building eventually became (again, ironically) a Christmas ornaments factory, which it may have been when this picture was taken. I have to guess it was around 1978 that French artist Jean Miotte helped found the Chelsea Arts Museum; the building was renovated for this purpose and remained functioning until bankruptcy forced its closing in 2010. The building still stands while the present owners try to decide what exactly to turn it into. And speaking of the aforementioned Chelsea piers...

C. Chelsea Piers; the blue warehouses tucked in the backdrop on the right side were among what is surprisingly historic stretch of waterway dating back to the Lusitania and Titanic disasters and also is the home of the phantom 13th Avenue; which was largely removed to accommodate the docking of large luxury liners such as the aforementioned. Again with the irony, the Lusitania left on it's fatal voyage from Pier 54; torpedoes sank the luxury liner and the event helped usher the United States into World War I. Before this, its sister ship the Titanic was on it's way to Pier 59 when it struck an iceberg and sank. Survivors were triaged here and housed temporarily at many buildings and hotels along the waterfront, including the three-story brick building that would one day become the Chelsea Arts Museum. At the time of the picture, the pier was part of the debate of whether or not to rehab/dismantle the West Side Elevated Highway, and when plans were put forth to develop the Westway project, Pier 54 was demolished, save for the arch entryway and the large stars that decorated it. Pier 59 was almost demolished as well until the Westway project ground to a halt; officially due to the need to adhere to the preservation of striped bass in the Hudson. There are plenty of politically intriguing stories concerning this project that would also cast some suspicion on two noted and recently deceased NY politicians concerning their involvement, but that is a post for a different writer to consider. What we do know is that after the demise of the Westway project, two developments sprung from the remains; the most effective being the development of the northern piers (including Pier 59) into the Chelsea Sports & Entertainment Complex. And, as TV buffs and film/TV industry folks know, this is where the legendary TV franchise Law & Order was headquartered and staged for its entire twenty year run, along with spin-offs such as Law and Order: Criminal Intent and Law & Order: Special Victims Unit, which is still in production and replaced the original flagship show's stages in 2010. An institution in it's own right indeed, and the answer to our bonus question. At least 25 films and several other well-known TV shows have filmed at the Chelsea Piers, which has a roadway leading to Pier 62 known as "Law & Order Way".

Interesting how so many elements in history and culture were part of a dynamic crossroads in a picture that captured the essence of the city in a much bleaker light; there could be no way to know the future and how near it was to the people riding in a beat up Ford Galaxie in 1975. Whatever decisions were made at the time directly or indirectly led to what this corner is now; a requiem to the lost character that was heralded for generations to come or a ode to determination to overcome darkness and uncertainty and emerge from the shadows of financial ruin and return to a place of innovation and indulgence. NYC rides hard and dies hard, but it never gives up.

Wow.
You certainly earned your soup.