Sins of the Preacher 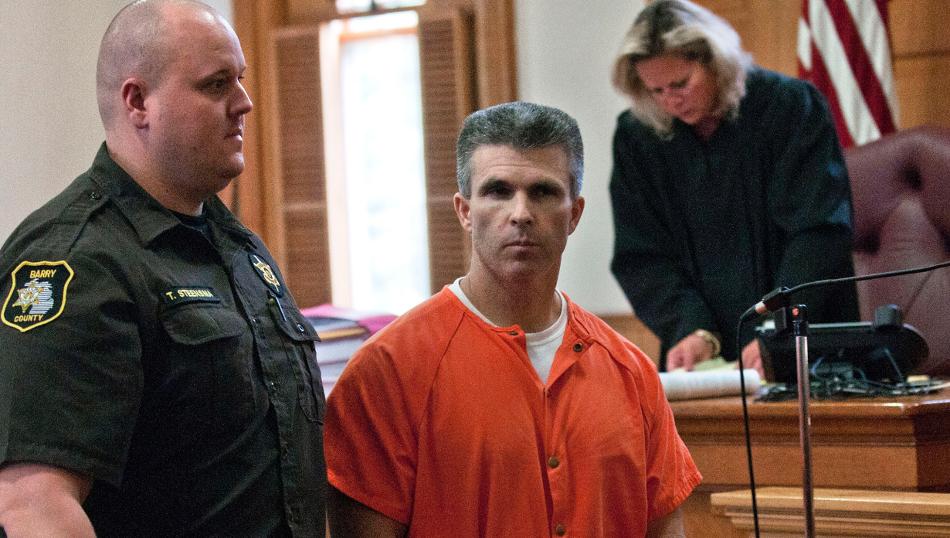 Greg Hanlon is talented reporter and writer. His latest story is for Sports on Earth. It is about former Yankee Chad Curtis:

Chad Curtis didn’t tell his lawyer that he’s doing this interview, he admits with a sly smile. Obviously, she’d be angry, because he’s appealing his conviction, and talking to a reporter is likely not in his best interests. But Curtis is still upset that he didn’t get to take the stand at his trial. He sees himself as a man for whom telling the truth trumps calculated self-interest.

That’s why, he believes, he has sat in prison since October on a seven-to-15-year conviction for molesting three teenage girls at the rural Michigan high school where he volunteered. He says he could have taken a misdemeanor plea, served a year and a half in county, and been home with his wife and six kids by now. But he’s an innocent man in his own mind, so he couldn’t bring himself to swear on the Bible — which he quotes frequently and encyclopedically during our two-hour interview at the Harrison Correctional Facility — and admit to a crime he didn’t commit.

As a major league baseball player, he wore a bracelet that said, “What would Jesus do?” Now that he’s a prisoner, he tells me, “Jesus lived the perfect life, and that got him crucified.” By this, he means there’s historical precedent for the harsh judgments of human beings to be 180 degrees wrong, and that he’s in good company.

He asks if I’m familiar with the show Pretty Little Liars. He says he prays daily for his teenage accusers, all of whom had similar athletic builds and All-American good looks. He says all he was doing in that locked, windowless, dungeon-like training room was helping those girls recover from sports injuries. He says he took the same all-out approach to treating sports injuries as he did to playing baseball — “whether it was running into an outfield wall or breaking up a double play.”

As for why the girls thought otherwise, and accused him of touching their rear ends, breasts and, in one case, genitals, he doesn’t want to speculate: “I’ve been really discouraged by how often and how wrong people have assumed my motivations, so I’ll extend them that same courtesy,” he says.

He doesn’t mention that not a single boy testified to having gone down to the trainer’s room for similar treatment.

Yeah I just finished this, Greg also did a great story on Dave Meggett a few months back which covers similar ground (http://www.sbnation.com/longform/2014/1/21/5320000/david-meggett-criminal-history-profile)

I doubt I'm alone here in that I can't help but look at Curtis through the lens of his time as a Yankee. And let's be real, during the '96-'01 run there were very few guys who gained a reputation as being hated in the clubhouse. By all accounts it was a pretty tight group. And yet Curtis, even while he was still here, had a terrible reputation.

Obviously that doesn't make him a child molester, but he was one of the few guys from those years that (outside of the WS homer) isn't really remembered fondly by anyone. Who else in 18 years has publicly feuded with Derek Jeter??

IIRC, wasn't Chad not part of the MLBPA union because he was willing to cross the picket line? That could be why he's disliked.

As a guy, I' wouldn't be physically rehabbing anyone without a third set of eyes (or at least a video tape camera) in the room. Because sometimes people set up others. Not saying that happened here, I don't know.

I don't know how to say this without it coming off like "Ya know...girls lie about being molested all the time", because obviously I don't believe that. But, FWIW, my mother is a principal in a large, public, urban High School and she tells every male teacher she hires "Never be alone in a room with a female student, always make sure there is a third person in there no matter what."

Which is something Curtis didn't do, which to me is an immediate red flag. This is to say NOTHING of the sexual repression associated with fundamentalist religious beliefs, which in and of itself...

Hmm.
When I was coaching soccer, boys soccer, I was told the same thing: do not wait around with one or two boys alone at the field when their parents are late picking them up. Always go into a nearby restaurant, or something like that. That was boys. I didn't follow that advice.
Maybe it's because I couldn't quite believe, in my heart of hearts, that anyone would ever accuse me of molesting ten year old boys. Maybe it was imprudent of me. But anyway that makes me very reluctant to read Curtis's flouting of the common advice as a red flag.

Which is not to say he's innocent. I figure he's probably guilty -- he was convicted, after all.

My sons (both adults) have at various times taught little kids (boys and girls) how to swim. Extraordinarily difficult with "touching" issues. For a while, they were told they could not touch a child at all, which makes it pretty tough to teach a 3 or 4 year old to float. They always had to have several folks watching, which made it tought because parents would interfere with the lessons.

I have no sympathy for someone like Chad who allows himself to be in a position with a student, alone, where no one can observe. Whatever happened there, and a jury decided that something wrong did in fact take place, was stupid at a minimum, and more likley reprehensible.

I have worked for many years at a facility where we have a pre-school. We never, ever allow an adult to be alone with a child; there are ALWAYS two adults in sight lines, including bathroom visits. All doors (except bathrooms, where we are especially vigilent) have glass in them so we can observe the entire room at any time.

He seems like a completely delusional f*ucktard to me. FWIW, I was once falsely accused of misconduct, not sexual, but motivated by personal animosity. It happens. But probably didn't here.

There are no gray areas, no fuzzy lines, when it comes to this sort of thing.

I am surprised anyone is even questioning the veracity of the claims.

It takes a lot of heart for a teenager to come forward with those kind of accusations. The odds are nearly insurmountable. Three cheers for those girls.