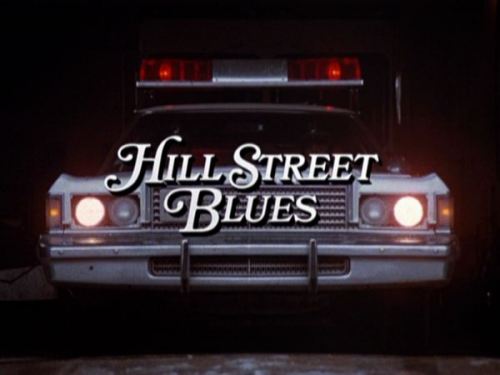 There’s a good oral history on Hill Street Blues in the Times (the entire series is now available on DVD):

ED ZWICK (co-creator of “Thirtysomething”) I had known what other cop shows had been and always found them not very interesting. They tend to be more plodding, whether they were the “Kojak”s or the “Cannon”s. But I certainly knew the Sidney Lumet movies, or “The French Connection,” or the grittier police dramas. And suddenly we see this thing that was filmic in a particular way. But more important was to see a thing on television that had its own unique voice. And when I say voice, I don’t mean only the writing. The voice of the show suggested a unified vision, a worldview, and that was Bob Butler creating a doc feel. And it was Michael and Steven with a voice that was irreverent, scatological, tough and unsentimental. And the cast that was not archetypal in the way that TV casts had been before. People were flawed.

JOHN WELLS (show runner of “ER” and “The West Wing”) The stories were complicated and ongoing. There was no simple, easy answer. Oftentimes, the crime or injustice wasn’t solved. They spent a tremendous amount of time really taking you inside the politics of the workplace, so it was really about the workplace as much as it was about the victims. Before that, wonderful shows like “Marcus Welby, M.D.,” “Mannix” and “Ironside” were all about smart people figuring out how to help people in the hospital and make things better or how to solve a crime and make sure justice was given. And “Hill Street” felt very real. You felt as if you were watching the difficulties of actually policing in a modern urban environment.

ZWICK The typical closed-ended, one-hour dramatic format before then had been to introduce a problem and to sum it up tidily within that hour, and then to go the next hour, the next week, with no ramification of what had happened the week before. So there was an unreality to the storytelling. There was no sense that there was any kind of repercussion or continuing sense of drama. And that really anticipates so much of what cable drama has become now, where it’s all about that.

Certainly in the discussion.

So glad the DVD release is spawning a new wave of appreciation for the show, which is my all-time favorite. A generation of people don't have any idea about it.

2) I didn't watch it regularly when it was out. My dad loved it. This DVD set is a good excuse to watch the entire thing. Jon, does it hold up?

3) Some aspects won't hold up as well as others, but overall yes. It invented much of what we take for granted on drama series today.

[5] I suppose there's no CSI without it, and definitely no Homicide, which came directly after (if memory serves) and built on the Hill Street model. I guess Law & Order fits in there somewhere.