Close to the Vest 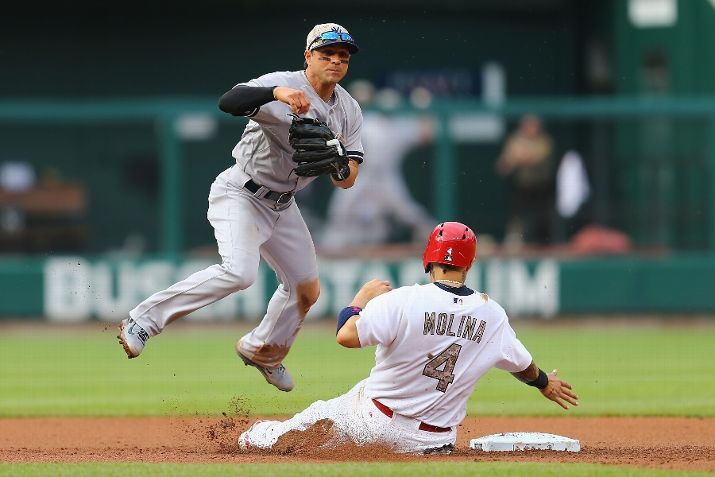 When the Yankees and the Cardinals met in the World Series in 1964, it marked the end of a Yankee dynasty that had stretched back 25 years. Though most favored the Yankees at the time, it wasn’t because they were the superior team, it was just because, well, they were the Yankees. (If you’re looking for a good summer read, by the way, you can’t go wrong with David Halberstam’s October 1964, which chronicles that matchup between the Yanks and the Redbirds. (If you want something with a happier ending, try Summer of ’49, also by Halberstam.))

When the two teams got together again on Monday afternoon in St. Louis is marked the 50th anniversary of that Fall Classic. After an hour-long rain delay, the Yankee hitters came out swinging as Brett Gardner walked, Derek Jeter singled to center, and Jacoby Ellsbury singled to drive in Grdner with the game’s first run.

The Cardinals responded quickly, getting the tying run when Matt Carpenter led off with a triple and then scored on Kolten Wong’s double.

Tied at one, the pitchers took advantage and then took control of the game for a stretch. Michael Wacha coasted through the early innings, retiring all nine men he faced in the second through fourth innings, and the Yankees’ Chase Whitley was almost as good over that same stretch, giving up just a harmless single in the third and two more singles in the fourth. I’ve no idea if this kid has a future with the Yankees, but it’s been fun watching him this month.

The Yankee hitters went to work again in the fifth. Ichiro walked and Brian Roberts singled to right, then Kelly Johnson singled up the middle to score Ichiro. Two batters later Gardner hit a sacrifice fly to score Roberts, and the Yankees had a 3-1 lead.

But that lead didn’t last long. Whitley faltered in the bottom of the sixth. He faced only three batters, and they all reached (Matt Holliday double, Michael Adams single, and a hit by pitch for Yadier Molina). Manager Joe Girardi had no choice but to make a move, and in strolled Preston Claiborne. Bases loaded, nobody out. No pressure at all.

Claiborne did give up two runs to allow the Cardinals to tie the score at three, but the damage was minimal. He had kept the Yankees in the game.

From there the respective bullpens took over, and the hitters went to sleep. The one highlight of those late innings from the Yankee point of view was Dellin Betances. He continues to dominate, but on Monday he was throwing harder than ever, touching 100 MPH on the radar a couple of times. With Bettances, Adam Warren, and David Robertson manning the seventh, eighth, and ninth innings, the back end of the Yankee bullpen is as good as it’s ever been.

Ellsbury drew a walk to lead off the top of the twelfth, then challenged Molina and came up with a huge stolen base to put the go-ahead run on second base. Brian McCann was hit by a pitch to put runners on first and second, and Yangervis Solarte dutifully bunted them along to second and third. Ichiro was walked intentionally to load the bases, putting the game in the hands of Roberts.

Roberts fouled off a pitch, then smoked the next one through the left side of the infield to score the go-ahead run. Soriano followed that with a sacrifice fly, Brendan Ryan singled in another run, and the Yankees were suddenly up 6-3.

Robertson allowed a run in the bottom half, but only his ERA cares about that. Yankees 6, Cardinals 4.

It was one of my favorite games of the season so far. Some flashy leather, too.

Oh, and D-Rob's ERA doesn't mind at all, because the runner who scored got on base by E6.

I loved "October 1964." Fascinating look at how the changing of the guard in baseball mirrored the bigger changes happening in America.

Dare I say the Yanks are starting to put it all together?

Maybe being "forced" to use young pitchers is the only way they will ever give those guys a proper chance.

Nice write up, Hank.
I remember '64 all too well. I just didn't realize that it was the end of an era for the Yanks - having started being a serious fan in about 55, I was used to the WS almost every year.

What I recall from that series is the domination by Gibson, Yogi getting fired after the series, and of course, Ken Boyer making us all cry.

Hank, your observation that this back-end of the bullpen is as good as ever was a bit of a shock. How is that possible without the GOAT? But so far, so great.

Luckily Mariano is one player whose reputation doesn't needing any fluffing - he's probably getting credit somewhere for influencing the next generation or something.

Is it fair then to say that the Yanks are making some sort of progress in rebuilding on the fly? I'd like to think they are similar to the early 90s Yanks in that they are waiting for their young guys to develop before feeding them into the clubhouse; the difference of course being that they are fielding a more competitive team now than those 90's clubs were capable of and without the malevolence of George hanging over them. It may be too optimistic a view, but then I'd like to see evidence that suggests otherwise.

[6] And by the malevolence, I mean that he had already damaged the club to such an extent that it made competition fairly impossible to implement even in his absence. That's not necessarily the problem now, but it may take a while to completely change the philosophy he instilled so that the logical hindrances are no longer an issue.

It is gratifying to hear Yankee fans not laud the memory of GS. Watching the Yanks trying to rebuild on the fly without the echo is interesting. The Yankee farm system is having a good year. When you are retired you have time to follow such things. Mike Ford from Princeton hit 4 hrs. the other night and he is not even consider a prospect. Hope they can hang in. Nice to know panic moves are not in the offing.