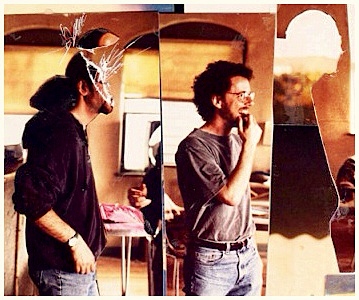 When I was 25 I got a job with the Coen brothers. I’d worked on 3 movies as an apprentice film editor and got a gig with them as a personal assistant when they made The Big Lebowski. I was with them for a year, from before pre-production through post-production (when they edited the movie, I transitioned from personal assistant to one of the assistant film editors). It was a memorable time, one that I’ve recounted often throughout the years when people tell me how much they love the movie. Now, I’ve got a long behind-the-scenes story, The Dudes Abide: The Coen Brothers and the Making of The Big Lebowski, over at Kindle Singles.

Joel and Ethan Coen were waiting for John Goodman to finish taking a leak. It was just after lunch on Dec. 10, 1996, and Joel, who’d turned 42 a few weeks earlier, was looking out a large window at the Hollywood Hills. It was raining again.

“That’d be just our luck, Eth,” Joel said. “Spend a whole winter in Minnesota and it doesn’t snow, then we come here and it fucking rains.”

Joel, older by three years, stood with his hands in his sweatshirt pockets. His black hair tied in a ponytail, small round glasses across his nose, he could have passed for the Ramones’ long-lost brother—the one who went to graduate school.

“The fucking rainy season,” he said.

On this rainy afternoon in L.A., Goodman and Jeff Bridges were meeting for the first time to read through a new Coen brothers screenplay called The Big Lebowski. Bridges was still stuck in traffic when Goodman returned from the can. He sat on the edge of the couch, legs open, his belly hanging so low it looked like he was sitting on the floor, and started quoting lines fromFargo. Goodman, a friend of the Coens since he worked with them on their second movie,Raising Arizona, laughed about the scene where William Macy tried to escape out of a motel window, only to be dragged back inside by the cops.

“That’s our answer to everything,” Ethan said. “You need a dramatic fall, put a character in his undies.”

“Why didn’t we write it like that originally?” said Joel. “It’s funnier.”

Goodman said, “Who else is coming on this show?” (In Los Angeles, movie people call a movie a “show.”)

There was Steve Buscemi as Donny, Julianne Moore as Maude, Jon Polito as Da Fino.

Joel said, “Our friend Luis, who was an assistant film editor on Hudsucker, will be playing the enraged Mexican.”

“Yeah, you’ll like Luis,” Ethan said in a creaky voice. “He makes a big statement.”

“Turturro is coming in to play the pederast,” Joel said. “He said he’d do his best F. Murray Abraham.”

Much of the cast was in place save for Bunny and Brandt and, critically, the Big Lebowski. You know, the other Jeffrey Lebowski, the tycoon whose Pasadena mansion is both miles and worlds away from the Dude’s rundown bungalow. With just over a month left before filming began, the Boys—as Joel and Ethan were known by colleagues and friends—weren’t close to casting the title role.

The trouble was that most of the actors they wanted were dead. Raymond Burr? Dead. Fred Gwynne? Dead. Anthony Perkins, Marty Balsam, Chuck Connors? All dead. Brian Keith was ill (he died less than a year later). Jason Robards was said to be having health problems.

The choices narrowed—Rod Steiger, George C. Scott, Charles Durning, Pat Hingle. Then, the impossible dream: Brando. It was a good dream, too, though unlikely. Brando had certainly grown into the role but he was eccentric, expensive, and didn’t much like to work. Still, the idea amused the Boys no end, and for weeks they quoted the Big Lebowski’s lines in a Brando accent: “Condolences, the bums lost,” Joel said with his jaw pushed out to look like Brando inThe Godfather.

But their favorite was, “By God, sir, I will not abide another toe.”

The Dudes Abide is available now. You don’t need to own a Kindle to read it. So long as you have a device that is connected to the Internet, you can download the Kindle App—to your phone or computer—and then purchase the story.

Alright you got me. I have a flight to Poland next week and I finished the Arod book. Just sent it to my Kindle.

Thanks, man! Hope you dig it.