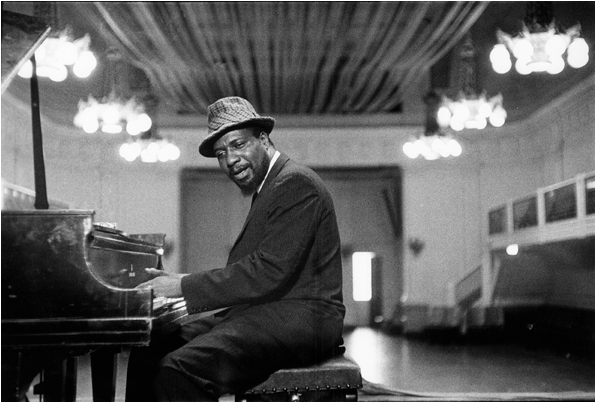 At the end of the hall on the ground floor of a tenement on New York’s West 63rd Street, behind a rickety door, in three small rooms littered with cardboard cartons, catsup bottles, half-empty suitcases, Japanese dolls in glass boxes, soup dishes stacked on a piano, team irons, clothes hanging from nails in the fiberboard walls, shopping bags and children’s toys, lives Thelonious Sphere Monk.

There he has lived all but seven of the 43 years of his life, first with his mother, his brother and his sister, and then with his wife and two children, entangled in a domestic clutter wholly inappropriate to his reputation as the weird and enigmatic genius of modern jazz.

Among all the jazz musicians of his generation, none was reported “further out” than Monk. Tales of his strangeness drifted through the stale and noisy air of every jazz joint. The hipsters, taking his name for an obscure joke, called him “The Mad Monk” or “The High Priest of Bop.” They made much of his clumsy dances, his fondness for silly hats, hit gift for cryptic and whimsical statement. (In response to the question “Why do you play such strange chords, Mr. Monk?” he once told a disc jockey, “Those easy chords are hard to find nowadays.”) It was always assumed that he could be found in some dark back room, a remote, if not imaginary, figure, like the Pied Piper of Hamelin.

But all the while, oblivious to the smell of boiling cabbage in the corridor, he has remained on West 63rd Street, a sentimental man with kind eyes and a full beard, playing his blunt and angular jazz on the grand piano in his kitchen.

Now suddenly, after 20 years of neglect, the critics are beginning to suspect that Monk may be the dominant jazz musician of his time. His conception of rhythm and harmony has influenced the playing of such dissimilar musicians as Dizzy Gillespie, Dave Brubeck, Miles Davis, John Coltrane and Sonny Rollins. Several of his tunes, among them Around About Midnight, Off Minor, and Epistrophy, have become jazz standards. His use of dissonance is analyzed in composition courses at the Julliard School of Music. Recently published articles assign him a niche in the development of jazz comparable to those of Jelly Roll Morton, Louis Armstrong, and Duke Ellington.

And yet, notwithstanding his new fame, the old rumors persist. Ask anybody who does not know him well, and he will say, “Yeah, man, that Monk, he’s a funny cat, man, he’s something else.”

Thank YOU for sharing this!

[0] Morning reading over coffee!
thelarmis, are you playing in NYC or just visiting family?
I featured Art Blakey & The Jazz Messengers With Thelonious Monk as my album pick last week, such a classic.