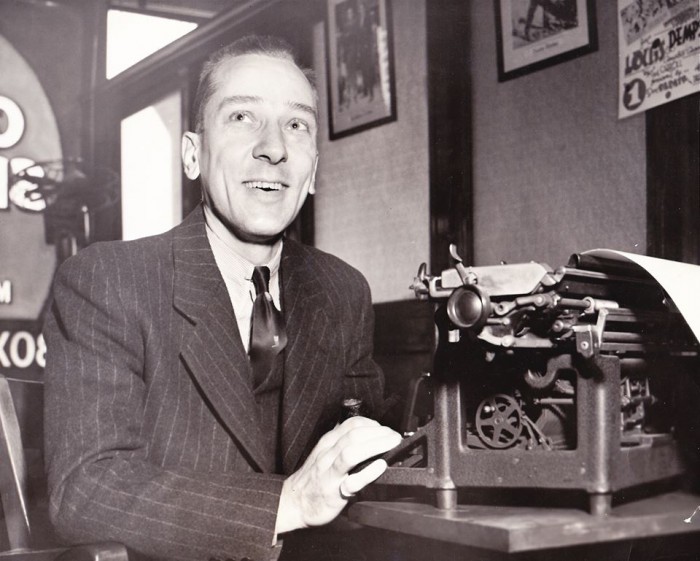 Couple of W.C. Heinz gems for you.

I never realized how many Bill Heinz stories I love until I read The Top of His Game. Some I would have loved earlier if I’d known about them or hadn’t been too lazy to root around for them in the library. But I didn’t, even though I sit here and tell you he was a friend and an inspiration to me. All I can do now is savor what he wrote and suggest that for openers you too might love his beautifully crafted 850-word newspaper columns on Beau Jack buying hats—”Ah want three. Ah want one for every suit”—as he waits to fight in Madison Square Garden, and on Babe Ruth, in his farewell to Yankee Stadium, stepping “into the cauldron of sound he must know better than any man.”

Bill, demanding craftsman that he was, thought “Death of a Racehorse” was the only one of his columns worth saving. But I’m glad his ode to Toughie Brasuhn, the Roller Derby queen, made it into the new collection because I doubt there’s a newspaper sports columnist in America today who’d be given the freedom to write about such an off-the-wall subject. And then there are the columns he constructed entirely of dialogue, harbingers of his best magazine work and even more so of The Professional. They weren’t written off the news or because they were on a subject that got a lot of hits. (Personally, I think only baseball players should worry about hits.) Heinz used dialogue as a device because it was a change of pace and, let’s be honest here, because he was trying to add to his authorial toolbox. So we get boxing guys and fight guys talking and Heinz listening without, he said, taking notes. Truman Capote made the same claim when he wrote the classic In Cold Blood, boasting that he could recall hours of conversation word for word. Somehow I believe Heinz more than I do Capote. I believe the distinct voices he captured on paper, and the oddball theories his largely anonymous characters spout, and the exotic world that rises up before the reader as a result.

It’s surprising how little time Heinz spent as a sports columnist—less than three years and then the Sun folded in 1950 and he took a giant step to full-time magazine freelancing. Judging by the contents of The Top of His Game, there wasn’t a magazine that wasn’t happy to have him—Life, Look, Colliers, Esquire, The Saturday Evening Post, Sport, True, even Cosmopolitan. Granted, it wasn’t Helen Gurley Brown’s Cosmo and Heinz wasn’t writing about sex and the single girl. But he was writing about boxing and a boxer’s wife for a distinctly female audience, and he delivered pieces that have stood the test of time.

And here’s one of Heinz’s classic magazine stories, “The Rocky Road of Pistol Pete”:

“Down in Los Angeles,” says Garry Schumacher, who was a New York baseball writer for 30 years and is now assistant to Horace Stoneham, president of the San Francisco Giants, “they think Duke Snider is the best center fielder the Dodgers ever had. They forget Pete Reiser. The Yankees think Mickey Mantle is something new. They forget Reiser, too.”

Maybe Pete Reiser was the purest ballplayer of all time. I don’t know. There is no exact way of measuring such a thing, but when a man of incomparable skills, with full knowledge of what he is doing, destroys those skills and puts his life on the line in the pursuit of his endeavor as no other man in his game ever has, perhaps he is the truest of them all.

“Is Pete Reiser there?” I said on the phone.

This was last season, in Kokomo. Kokomo has a population of about 50,000 and a ball club, now affiliated with Los Angeles and called the Dodgers, in the Class D Midwest League. Class D is the bottom of the barrel of organized baseball, and this was the second season that Pete Reiser had managed Kokomo.

“He’s not here right now,” the woman’s voice on the phone said. “The team played a double-header yesterday in Dubuque, and they didn’t get in on the bus until 4:30 this morning. Pete just got up a few minutes ago and he had to go to the doctor’s.”