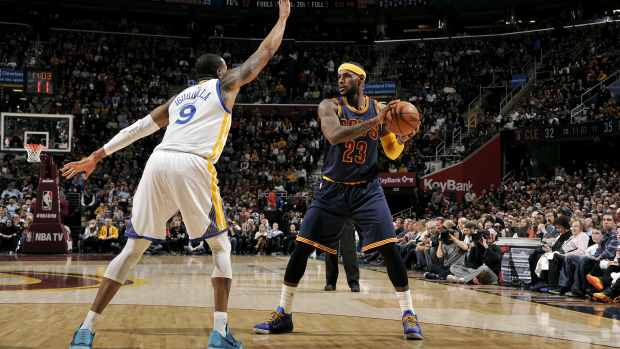 The NBA Finals start tonight. I am rooting for the Cavs because I’d like to see Cleveland celebrate a championship. But I also really enjoy watching the Warriors play and will not be sad to see them win, which I think they will do handily (say in 5 games). The Cavs just have too many injuries. Yes, they’ve got the best player in the world–and of his generation–in Lebron James, but the rest of the team just isn’t all that great and without Kevin Love and Kyrie Irving far from healthy, I just don’t see how they could pull it off.

Not a basketball fan, but it would be nice to see long suffering Cleveland take a title.

Win-Win series for a long-suffering Knicks fan. Warriors are fun, and LBJ is just phenomenal to watch play basketball. But I'm leaning Cavs.

I am a basketball fan, and I guess I'm with you guys -- rooting for Cleveland, but not desperately. They're looking pretty good right now (19-13).

The Red Sox played a fun game this afternoon -- a getaway game. They coughed up a 4-0 lead, went to their closer in a tie game in the ninth (at home), and Uehara choked up 4 without recording an out. Oh, well, he had some exciting fielding help, it wasn't all his fault.
Thank Brian for Andrew Miller, and thank Mo for Dellin. RSN is pretty close to chalking up the season. I hope a little winning streak will get them back on board -- no fun if they abandon all hope so early.

[3] Oh it's fun all right, unless you're the type that likes to watch overcooked hot dogs squeal in agony...

I'm also rooting for Cleveland, but not because of anything I have against the Warriors or Curry. To the contrary, I enjoy them very much. And Curry is my favorite player in the NBA, a perfect passing of the baton from Duncan to Curry.

I could really care less for cities that have not won any championships, I kind of like watching long periods of suck and suffering. Why? Because I'm a sadist. I'm the guy rooting really hard when the Lions are 0-15 to see them get that last loss. I also root for 7 ER on "Harvey days."

I want the Cavs to win because it will really piss off Heat fans, I hope that causes Riley's head to explode or maybe all his hair falls off. Anything that makes a Heat fan sad/angry or anything that makes Riley's wonderful life even a little bit horrible is what I enjoy, and why I'm rooting for Lebron and the Cavs.

Did I mention I'm a sadist?

Great game, shame Irving is not healthy. Without him 100% it's a done deal for GS.

[5] lol... I watched the ot. There's no use watching anything but the tail end of any NBA game as far as I'm concerned. I'm rooting for the Warriors but you've moved me closer to the fence.
[3] a winning streak? F that noise. : )

[3] I absolutely LOVE when the shit sox lose. Especially in grueling fashion. I truly wish they'd go 0-162 and be contracted. And, yes, I abhor Fenway Park. Regardless of what team plays in that little league field, I loathe that freaking place.

I kinda liked Bill Cartright growing up, as a kid in Far Rockaway. I had those super thin, perforated, "cards." In college, I sorta rooted for the Knicks, when my brother was super into it and we had some characters on the team.

The only real "fandom" I can admit to is *loving* watching Michael and Kobe. Michael was kinda like Mo, except, maybe he was better?! Blasphemous, I know. But, he was always on the court. It was amazing watching him play. He, seemingly, would always come up *huge* when it mattered most. Kobe was starring in the finals every summer I was gigging. He seemed liked Jeter, in a way, but not as genuine. But, holy fuck, you couldn't contain him. I dug watching him and loved Derek Fisher. There were times I'd play better because of their dominance.

Since our Captain retired, I don't have any emotion toward a player and won't ever again. I will ALWAYS want the Yankees to win *every* game and *every* championship, but I don't give a flying fuck about any other sporting event...

Tough loss for the Cavs. Lebron had a great game and then when he went cold at the end--settling for too many jumpers--none of his teammates could pick it up (God, imagine having to pin your hopes on J.R. Smith?). Awful about Irving but not a surprise. And he played well. It was a fun back-and-forth game. Probably wouldn't have mattered if the Cavs won but things are not looking good for them.

8) Why do you think you'll never have "any emotion toward a player and won't ever again"?

I'm a basketball guy who never watches the NBA. I did see the last 6 minutes or so last night. Once Irving got hurt it was all LJ backing in. The NBA rule I hate came into play and reminded me why I don't watch. The man guarding the Center at the foul line had to keep running in and out of the key to not violate the defensive "help" rules. Anyway without more help for James the Cavs. will have a hard time winning.

[6] As a die hard Knicks fan, hating Riley will always be part of a Knicks fans' blood. :-)

Once Shump missed that shot at the end, then I felt the Cavs missed their big opp. I hope the Cavs can make something out of this series, but I suspect that will be too hard for them to do because their big guns are hurt.

Slightly off topic, but am I the only one that can't get enough of the pictures of Chris Christie playing softball at Yankees stadium.

I'm not into fat shaming anyone, but when it is a big bully then that just goes out the window.