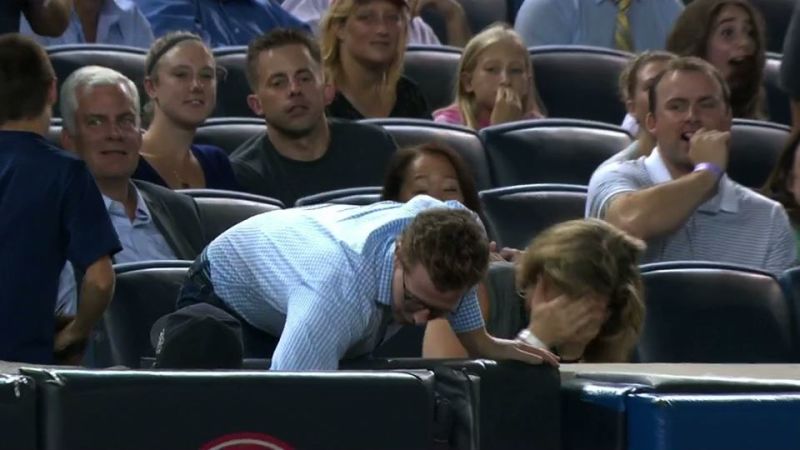 Big Mike got his tits lit to the tune of 6 runs in the first inning last night. His mates got him right back in the game scoring 4 in the bottom of the first. But those were to be the only runs the Yanks scored all night. Yes, Jacoby Ellsbury narrowly missed a 3-run home run that would have put the Yanks ahead, but that’s just the kind of night it was.

Early in the game, a high pop foul landed in the first row of the seats on the third base line. A clean-scrubbed, attractive, but slightly nerdy guy with glasses–Clark Kent–reached back to catch it and missed. Hit his hands but he couldn’t hang on. It was a tough play under the best of circumstances. A little while later a foul ball bounced right to him, took a late bounce and he muffed it. Then the third base coach tossed him a ball and the man went to catch it. But the ball bounced on the guard rail and he missed that too. In a way, they were all hard luck chances. His companion looked especially fetching as she laughed, in a combination of surprise and mortification. But the guy seemed to have a sense of humor about it all.

Let’s hope the Yanks have the same kind of humor because they are playing about as well as this guy can catch.

10-4 was the final. The Yanks just need to win a couple of games with five left. No time to panic though the seeds of panic are in place and ready to go.

Just repeating my post from last night. Please, somebody, anybody have anything encouraging to add?

Now I'm feeling even more gloomy. Since the all star break, the Yankees have four of the top twelve lowest batting averages for players with 200+ plate appearances.

If the pitching hadn't been decent, Beltran hot, and Bird making some remarkable meaningful hits, this team finishes below .500. Maybe things reset in the playoffs, but how?

Yeah, Alex's ab's have been bad lately. He's shown no pop, no good swings. And that kind of figures given his age and health. Gardner and Ellsbury are more of a problem, aren't they?

Good news is that they've got to win 2 of 5 games. And if they can't they don't deserve to be the wildcard.

I was recording the game and stumbled on it in the 8th. So glad that I didn't sit through that shlop.

I saw a quote in the paper and AROd said, that the game was the Red Sox playoff and "they want to make an impact...and we would be the same way playing against them"

You were playing against them and this is for the "actual" playoffs. There is no sense of urgency with this team. Girardi better light a fire under their asses. It is getting late in the season for this half-assed effort.