It Wasn’t as Bad as You Think 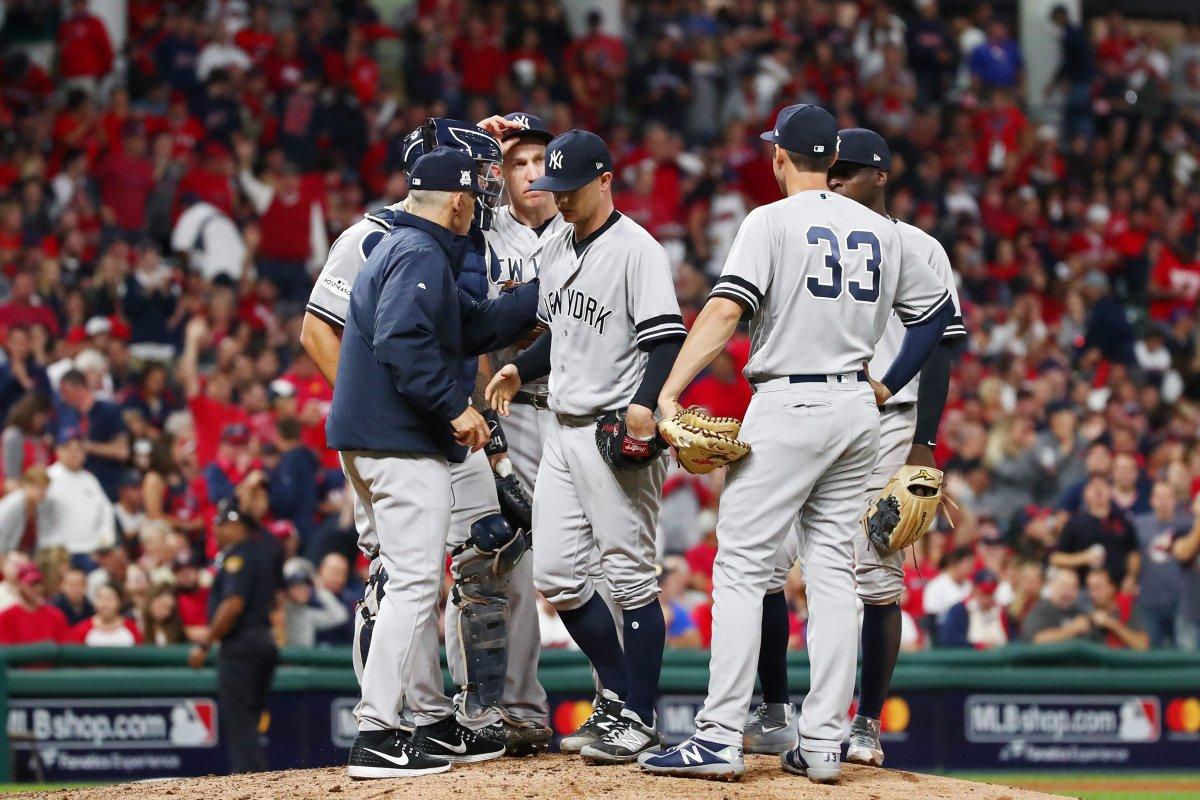 Everything is amplified and magnified in October, and so it was on Tuesday night as the Yankees dropped the first game of the five-game American League Division Championship series in Cleveland. This is the same Cleveland team who rattled off a 22-game winning streak in August and September, the same team that many analysts tap as the most complete team in baseball, so it shouldn’t be a terrible surprise that the Yankees dropped a game to them. No one, after all, expected a Yankee sweep.

Nothing went right for the Yankees on this particular October night. Cleveland manager Terry Francona surprised everyone by tabbing Trevor Bauer to start Game 1 instead of Cy Young favorite Corey Kluber (can’t wait to see him in Game 2), but Bauer quickly justified Tito’s faith by retiring the first five Yankee hitters he faced. After an odd four-pitch walk to Greg Bird in the second, Bauer rebounded to strike out Todd Frazier to finish the inning. The pitch to Frazier appeared to be outside, just the first of many questionable calls that would benefit Bauer over the course of his outing.

Based on what we saw during the regular season, Joe Girardi’s choice for his Game 1 starter was also a surprise. Instead of pitching Masahiro Tanaka, who had had five days rest since his scintillating performance in his final start on September 29th (Tanaka will start Game 3 on eight days rest), Girardi decided on Sonny Gray. We’re supposed to be excited about Gray, a talented young pitcher with a manageable contract, but he’s been more grey than sunny during his time in the Bronx, losing seven games since he arrived and pitching to a mediocre 4.58 ERA in September.

Gray’s troubles on this night began in the bottom of the second. Jay Bruce led off the inning by pounding a ball off the wall in left field for a double, Carlos Santana singled to center, and then Gray made things worse by plunking Lonnie Chisenhall with a fastball to load the bases with nobody out. With the Yankee bullpen still recovering from its work on Tuesday night, this was the last thing Girardi needed to see. But Gray dug in and made a big pitch — and got a big assist from shortstop Didi Gregorius — inducing Roberto Pérez to ground into a nifty 6-4-3 double play. Bruce scored from third on the play, but no one in pinstripes was complaining. When Gray got Giovanny Urshela to fly out to end the inning, there was a sense that disaster had been avoided. Gray had weathered the storm.

The third inning was quiet for Gray, but he wandered into trouble again in the fourth. As most rallies do, this one started with a leadoff walk to Edwin Encarnación. Two pitches later it was Jay Bruce again, this time lifting a lazy fly ball to right field that floated over Aaron Judge and over the outfield wall for a lazy home run. Instead of digging in again, Gray began digging his own grave. He walked two of the next three hitters (his last three hitters), and then Adam Warren came in and made things worse by allowing a single to Urshela.

Once again, the bases were loaded; once again, the game seemed to be hanging in the balance. Once again, the Yankees wriggled free as Warren retired Jason Kipnis on a fly ball to right field. Cleveland held a 3-0 lead, but with the Yankee bats as cold as they were, those three runs felt like touchdowns.

Bauer was coasting. He had given up that walk to Bird in the second, and Judge had reached in the fourth after striking out on a wild pitch, but that would be it as Bauer compiled five hitless innings to start his night. His curveball was devastating, and during the postgame show YES Network commentator Jack Curry revealed that his average break of 9.6 inches was the biggest in baseball, greater even than Clayton Kershaw’s. Working off of that curve, Bauer confounded Yankee hitters with a mid-90s fastball up in their eyes and a backup slider that started in at the hands of the left-handed batters before breaking back over the inside corner.

As good as Bauer was — he’d finish with eight strikeouts and just two hits over six and two-thirds of an inning — he had help from the umpires. Third base umpire Brian O’Nora seemed to be flipping a coin when handling check swing appeals, but worse than that was home plate umpire Vic Carapazza’s strike zone which seemed to breathe in and out all night as if it were alive. Chase Headley, Didi Gregorius, and Aaron Judge all struck out on pitches that were outside the strike zone presented by TBS, but neither of the network’s broadcasters made mention of this. (It’s no surprise that John Smoltz remained quiet, considering how much he and his Hall of Fame teammates benefited from the stretching of the zone during their careers.)

When Cleveland scratched out another run in the fifth on the strength of a single from José Ramírez, two wild pitches from Warren, and a sacrifice fly from Bruce, the 4-0 lead felt insurmountable. The Yankees made one last push in the eighth when Headley and Brett Gardner worked walks against Andrew Miller to bring up Judge with two outs and a chance to put some runs on the board, but the MVP candidate struck out for his fourth time of the night to end the inning and effectively end the game. Cleveland 4, New York 0.

It was a frustrating three and a half hours, but it wasn’t all bad. The announcers breathlessly reported all night that the Yankees had only two base hits, and they seemed almost disappointed when Starlin Castro punched a ball to right in the ninth for the team’s third hit, but Cleveland had only five hits themselves, none after the fifth inning. Jaime García pitched well enough in relief that it wouldn’t be a surprise to see him get a start instead of Gray should that spot in the rotation roll around again, and Dellin Betances appeared to put his September struggles behind him as he struck out the side in the eighth inning on just eleven pitches.

So there’s hope, my friends. Cleveland is a good team deserving of all the accolades that have come its way, but I still believe in these Yankees. This is the most interesting Yankee team in half a decade, and I’m sure they’ve got some fight left in them. I’m already looking forward to Game 2. Oh, and there’s one more thing — at least there weren’t any midges.

Hank, good call on the umpiring. I felt there was a close game in there but the home plate umpire wouldn't let it out. My oldest son and I visited Brooks Baseball to check the zone before school this morning and he was all worked up.

Gray had one pitch outside their plotted zone called a strike and 5 inside or on the edge called balls. Bauer had 6 pitches outside the zone or on the edge called strikes and ZERO inside the zone called balls. That's a HUGE 10 pitch swing there while the Yanks still had a chance. The three you mention to Judge, Gregorius and Headley were all bad. And consider Judge and Headley were both punched out in the inning where Hicks doubled. Could have been something brewing there.

If you expand it to relievers, the Indians had +13 pitches on the Yanks last night. Ouch.

Damn, Astros blew a chance to blow the game open.