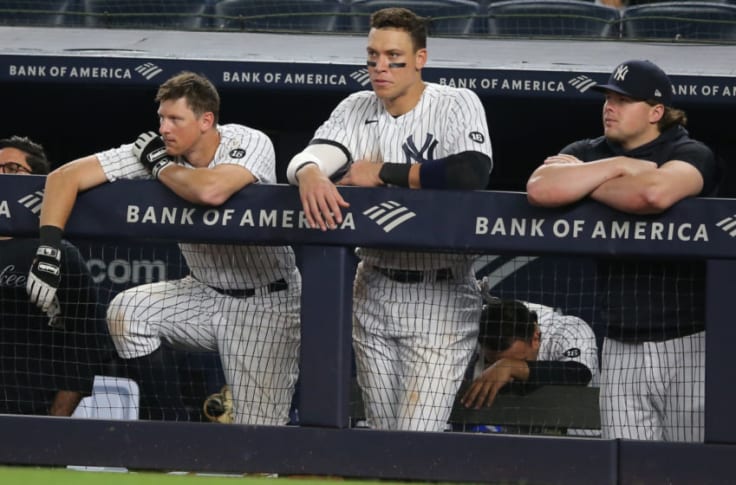 At this point, I don’t even like looking at the scoreboard. It got easier when the division slipped out of reach and I could just root for the Rays to beat everybody, but the rest is kind of muddy. Do I want the Red Sox to push the Blue Jays further back in the wildcard race, or do I want Boston to lose so the Yankees might be able to host the wildcard game? And what to make of the Oakland-Seattle series? Would it be better for one team to sweep the other, or would a split be better? It’s just too much.

Such is the nature of a pennant race, especially one augmented (or bastardized, depending on your point of view) with so many extra spots. I remember seasons when there was nothing more boring than September baseball, as the Yankees and I basked in the glory of a double-digit division lead and looked at the playoffs as a birth right rather than a pipe dream.

Ah, but times have changed. It’s natural to look at each one of these games as life and death, to curse our luck and load a dropped foul ball with the weight of an entire season, but we all know the truth. There is no greater measuring stick in all of sports than the 162-game Major League Baseball season. When each of those games has been tallied, you are, as another New York coach once famously said, what your record says you are. These Yankees won’t look back at a dropped popup, a six-run ninth inning, or any of various trips to the injured list. You can’t pinpoint anything in this haystack full of needles; the pinpoints are everywhere.

The irony of baseball’s playoff expansion is that while it may have created more excitement in some corners of the country, it’s diluted it in others. Out in California, many are making the argument that the Giants and the Dodgers are the two best teams in baseball. Were it not for the wildcard, this would be a playoff race for the ages, but both teams are already making postseason plans. (The Dodgers, sadly, having built one of the best starting rotations in recent memory, a stable of pitchers that will make them the favorites in any postseason series, face the possibility of elimination in a wildcard game without any of their superior depth coming into play. Will it be exciting? Certainly. Is it what baseball is meant to be? Absolutely not.) Oh, and because baseball refuses to fix inequitable brackets, the Giants’ (or Dodgers’) reward for having the best record in the National League will be what baseball feels should be the weakest playoff entry, the wildcard team. In this case that means the two best teams in the sport will face off in a first round five-game series. To quote another New York manager, “It’s not what you want.”

But the wildcard allows us to dream. As inept as the Yankees have looked recently and at various times throughout the season, they can still win the World Series, and that’s the downside of the wildcard. In theory, you could put the Baltimore Orioles into the playoffs and watch them win 12 of 20 October games and host a championship trophy in the end. If there is any sport that should not have expanded playoffs, it’s baseball, but here we are.

And so dream, I will. If the Yankees can finish up business against Texas and then win six or seven of their last nine against Boston, Toronto, and Tampa Bay, there will be at least one more game. At this point that’s all I want. One more game.

Sorry for the delay on this everyone. Things got away from me this week, but...

This team has 9 games left but Cole is only scheduled to pitch in two of them? I know this team will never do it but Cole needs to squeeze in another start and have Severino start at least one of the games.

So you’re suggesting that after pitching on Sunday Cole should go on two or three days rest the rest of the way? This isn’t 1961 and he isn’t Whitey Ford. And starting Severino after he hasn’t pitched for almost two years? I mean, that just doesn’t make a whole lot of sense to me.

Sevy? He was fantastic with a big lead against a bad team, but...

I fear Last night was like a carnival freak show exhibit. It's good for a glance, but linger too long, the novelty wears off and you wish you'd saved the money for the tilt-a-whirl or a chillidog.

Maybe we can get some real Banter banter going. 10 games to go, tied for a playoff spot, tough opponents coming up. This shit is getting serious!

[3] I seem to recall Bauer pitching on short rest down the stretch when he was with the Reds and did very well. As for Severino starting, he pitched 2 innings already and most of the starters on this team average about 4/5 innings a start so is it that much of a stretch?

Cole needs to pull a CC Brewer and simply pitch every game from here on out.

Nice win. Keep it up.

If the last dozen games of the regular season are an opera -- and aren't they? -- the Texas series was just the overture.

Act One begins tomorrow in Boston.

Time to get it done, or not.

It's almost fitting that the sum of the Yankees' successes and failures over this roller-coaster have left them exactly on the bubble, with exactly these three opponents in front of them.

In or out? Success or failure? Whatever the answer ends up being, we know it will ring with purity -- and finality. No flukes left.

Get it fucking done. Or know you didn't deserve it.

[11] Exactly! Would it be nice if the postseason were already clinched? Obviously. But with nine games left against the Sox, Jays, and Rays, it's nice that they have their destiny in their own hands. There will be doubt, one way or the other.

Holy cow, Twinkies! Keep it up, lock it down, hang in there Big Pine!

WTF are those Red Sox uniforms??

Great start here, even Gleyber with the big hit!

Can’t stop laughing at these Sox uniforms. They look like the AFlac insurance logo

I remember a spring training game in March. I saw a Stanton AB. It looked like he had never played baseball before. Lol...

Keystone Kops D by the Sox, nice. This shaping up to be an easy one.

Oh, the Sox uni, yeah.
That's a Nike creation. "No!" I hear you cry! "The ancient and venerable game of baseball, selling out to a faceless international corporation, for profit???"
I know, it's hard to believe. I am shocked, shocked that there is *gambling* going on in this establishment!

My biggest issue with these City uniforms, or whatever they're called, is that they take away from what baseball should be selling -- the history. Here you've got the biggest rivalry in the sport and the biggest regular season series the two teams have played in who knows how long -- and the Red Sox are wearing pajamas.

Really wouldn't mind seeing them pull Cole after this inning. Is it risky? Sure, maybe. But if they can get a win from him tonight on just 75 pitches, that would really bode well for his next start or two.

[24] It's not very risky.
This is a very, very, very low leverage situation, and you're right, it's just a waste of GC.

[25] Normally I would agree but with this pen at fenway? Seems very risky to me

I mean, you might give away one or two percent of win expectancy by wheeling in, I dunno, Heaney? for say two and a third innings. Doesn't it seem worth more than that to have Gerrit Cole for an extra start, or maybe to have him available for a wild card game?

Anyway, too late now, wrong decision to leave him in. But in general I think you have to play to maximize post-season prospects here, not to maximize one-game winning.

"Now everyone has been invited to the party. "
-Ken Singleton

Why the hell is DJLM sitting this one out?

It's too early for a nail-biter.

Boat you up too?! My puppy woke me up so I’m watching now

I slept in yesterday and had to watch the game on archive, so I figured I'd make an effort today.

They just said DJLM is banged up. Dang.

Judge is putting on a clinic in right field.

JFC! Back to their old tricks.

But please don’t ever bunt. Not even first and second no out down a run. Because we’re Thoroughly Modern Fans and look down our nose at “plays.”

Yum love me some Giancarlo Salami!

Is that ball still traveling? Not sure why he would throe that pitch but thank you

Hoping that that Stanton blow will be the new Tino 98.

[48] Seriously. That is one of the most impressive HRs I have ever seen. It was like 50 feet over the heads of the fans in the Monster seats.
[50] Oh right because DST here. Still, hats off to you. Hey I'm glad you don't have to look at the eye-destroying Nike Sox uniforms today!

I can't take this

Yeah okay that's not good.
Who else we got to close?

How about Blake tell Chapman stop it with the sliders?

Yay!!!!!!
Oh man I was really worried that we were gonna see Devers with the bases loaded.

I have to say, I've got a completely new appreciation for Giancarlo Stanton, and not just because of that ridiculous home run. He's just been great for most of the season, and especially for the last two months. For the first time since he came over, I'm seeing consistent evidence not just of his comic book strength but of actual hitting ability. Of all the sluggers on the team, he's the most likely to hit a line drive the opposite way. (Well, Judge is probably right there with him in that respect.) It's been fun to watch, and here's hoping that we're watching in October.

[64] I agree about Stanton, I used to think he was just a giant Slugging Slugger but he’s actually a good hitter. Hopefully stays healthy and in the tge outfield.
Ready for a sweep!

ortiz shows up and things turn south. Fuck. Great arm, Gallo. Way to show it off to allow runner to advance to 2nd!

I have to go to work now...grrr. Hang in there guys.

Not sure how Montgomery got out of that inning. He really needs another pitch to become better than a 4/5 inning pitcher.

ARod is an idiot.

Why take Holmes out with only 11pitches??

Not sure what’s worse, seeing Sanchez not able to catch anything, Rodriguez trying to impersonate a MLB pitcher or Boone playing reliever r0ulette.

Can Gallo be returned to Texas? I mean he can't hit so at least catch the ball??

He's got cool hair, though.

I guess Wade is not into sliding?

Evening, all my dear old friends.
I can't take this.

It's like you take this game, no, no, you take it.

Man, that was some fucking shot.

I wonder if that shot will catch up to yesterday's?

Quite the Sunday night here folks.
I’m glad this was a 7pm start and not an hour later, else I’d have missed all the 7/8 inning fireworks.

Yay! He caught the baseball!

Fill in the blank

Weeping! Good to see you, what a game this has been..I’m catching up on the top 8th here, Judge left the game??

I can understand not asking hitters like Judge or Stanton to bunt or slap against the shift. But Gardner?

Hell yeah! Bring on the jays.