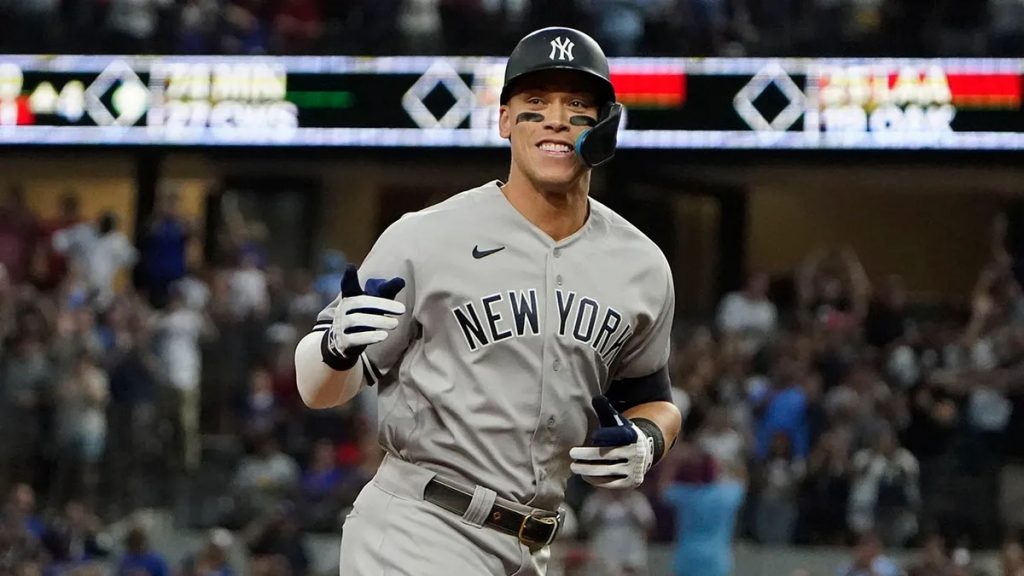 When I woke up on Wednesday morning and checked my phone, the notification screen was full. The latest was from Twitter, from someone who seemed to be talking about an Aaron Judge deal. I found the truth within about thirty seconds — forty-five minutes earlier, Judge had indeed decided to return to the Yankees and had agreed to what we’ve been told will be a nine-year contract for $360 million. I already had a handful of texts from East Coast friends, and within the hour I’d get a few more from folks out here in California who thought of me when they heard the news. It was a whirlwind.

It been a long, strange journey that started before the Astros were done celebrating their victory over the Yankees in the ALCS. What would Judge do? With the Judge camp somehow as leak-free as a Flex Tape commercial, the baseball world was left to tea leaves and idle speculation. First we believed that the boos he heard in his final game at the Stadium might push him towards leaving, but when Anthony Rizzo signed we thought it meant he was staying. When he accepted his American League MVP award and joked good-naturedly with Giancarlo Stanton, it was another positive sign — of course he wanted to stay and play with his good friend, Big G.

But baseball is a business. We know this intellectually, but sometimes a baseball hero can turn an intellectual fan back into a ten-year-old, and we can forget the magnitude of the millions being offered to these players. Likely no fan base in sports is more guilty of this than the Yankee Universe, where we often drastically overestimate the power of pinstripe tradition and history. Most of us would probably give up a few years of our lives to experience any of the fantasies we’ve seen play out over the past few decades. To stand in right field and listen as an entire stadium chanted our name, to lace a single to right field for a game-winning RBI in our final at bat, to walk off the mound one last time and sob on a friend’s shoulder because the dream has come to a close. To stand before a microphone in the middle of the diamond and somehow try to explain what it means to have your jersey number hung alongside Ruth and Gehrig and DiMaggio.

We’ve convinced ourselves that all of those moments meant more precisely because of where they happened, not just how they happened. We’ve convinced ourselves that being a Yankee means more, and so it’s confusing when players — the businessmen whose salaries are paid for with the turnstiles we spin, the jerseys we buy, and the remotes we click — consider leaving. Why in the world would they?

And so when we first heard whispers of an offer from the Giants, it wasn’t overly concerning. Of course he has to talk to other teams, we reminded ourselves. It’s part of the process. He has to gauge his worth on the open market, but that’s all it is.

As the days went by and there was still no positive news, we tucked ourselves in and spun our own tales to keep us from panicking. Does he want to be Derek Jeter or Robinson Canó?

And then Tuesday happened. Most baseball observers still believed that the Yankees were the frontrunners to retain Judge’s services, but on the second day of the winter meetings, we suddenly began hearing reports that the San Francisco Giants were making a strong push, and we even heard numbers that were far larger than the Yankees’ last offer of $305 or $310 million. Things were getting interesting.

Weeks earlier I had set up Twitter alerts on my phone for all the relevant Yankee writers, and that was in addition to my standard alerts from ESPN and the Athletic. My phone was buzzing like a beehive all week, but it was never about Judge, always about a rumored deal for number three starter in the National League Central. Sound and fury, signifying nothing.

Thankfully I was in the middle of basketball practice when Jon Heyman sent off his infamous “Arson Judge appears headed to Giants” tweet, so I didn’t have to live in that seven-minute universe in which the Yankees’ had allowed their best player to leave, but it certainly seemed like something bad was brewing. Where there’s Arson, after all, there is usually fire. I was convinced — or at least almost convinced — that he was gone.

Aaron Judge is more than just the numbers. Let’s set aside his historic 2022 for a moment and look back to his rookie season of 2017. That was the year when we knew he was different. Judge can only be compared to Derek Jeter, but not even Jeter had the immediate emotional impact that Judge did when he arrived. Jeter was a good player, a Rookie of the Year winner like Judge, but in 1996 he wasn’t yet the team’s biggest star.

In 2017, the Yankees had Chris Carter at first base, Starlin Castro at second, and Chase Headley at third. Honest. Judge opened the season in right field, and after hitting ten home runs in April and seven more in May, he wasn’t just the tallest Yankee, he was the biggest. The Judge’s Chambers was still a season or two away, but fans at the Stadium were already wearing robes and powdered wigs in the stands. Each game was a celebration, each at bat was an event.

When the Yankees came out to the West Coast in June, Judge was hitting .347 with 21 home runs, but when my son and I headed out to Anaheim for the opening game of the series, I was still stunned by what I saw. There are always thousands of Yankee fans at these games, but this time there were as many Judge jerseys as Jeter. A few rows in front of us sat a family of five, each wearing a navy blue Judge 99 t-shirt. With each Judge at bat, someone in the crowd would yell out “All Rise!” and we dutifully stood for every pitch. Three thousand miles from Yankee Stadium, these fans who had planned ahead and ordered their gear in anticipation of their hero’s arrival all knew exactly how to worship. And when Judge hit his 22nd home run that night, the celebration in the unofficial Yankee section along the right field line in Anaheim Stadium was raucous. The MVP chants bounced around the stadium as Judge jogged around the bases with his head down, likely already thinking about his next at bat.

If Brian Cashman or Hal Steinbrenner had been in the stands with us that night, they’d have offered him a lifetime contract on the spot. It was his 86th career game, but he was already the face of the franchise. 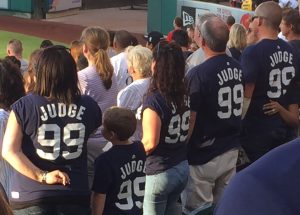 When I went to bed on Tuesday night I was resolved to the fact that none of this had mattered. Aaron Judge would be blasting baseballs into the San Francisco Bay in 2023, but before he ever played a game in his new home, he and the Giants would open their season on the road… playing the Yankees in his old home. I fell asleep imagining this cruelest of twists, and I wondered if fans would cheer him for his six years of greatness or jeer him for having the temerity to leave it all behind. I cursed myself for caring so much.

And then it was morning.

For the next nine years the Yankees will be paying Aaron Judge for a season neither he nor anyone else will produce again, and that’s okay with me. I truly hope that he’s able to carry the team to a World Series championship or two, but I won’t be terribly disappointed if he doesn’t. For me, the true victory came on Wednesday morning with the realization that for the next nine years I’ll be able to watch Aaron Judge play for my favorite team. My son and I will go to as many games as we can, he in his Judge jersey and I in my Jeter, matching countless father-son combos in the Bronx and beyond.

I can't speak for anyone else, but you deftly captured the roller coaster I was riding all off-season. The ups and downs the twists and turns and that hairy drop right before the safe finish. Whew.

[1] Totally agree! I missed the Judge to the Giants bit on Tuesday - too busy with work - but I've never been more scared that the Yankees were going to pick payroll flexibility over paying the guy they had to have. My 99 jersey will get more use instead of being a relic.

I honestly don't know that I could have watched baseball next season if they had let Judge walk. I am glad I don't have to think about that anymore.

I'm really hoping they get Rodón now. Partly because he's a good lefty, of course, but also partly because I'm going to call him Rodan. I miss Matsui.

Excellent writing Hank. I go back to the days before Cliff Corcoran. Alex is a great writer, but seems to have lost a bit of his passion for the Yankees. I'm really glad you are here.

So... should Gleyber stay or go?

I think people have Gleyber fatigue and figure that if Volpe is the next shortstop, why not give Peraza a chance at second? (Or maybe Peraza is the better SS and so Volpe plays second.) I am for giving the kids a chance but unless Gleyber gets traded for something really awesome, I wouldn't trade him. You never know when someone gets hurt or the kid needs a wee bit more experience in AAA.

[4] I assure you that Alex has not lost a drop of passion for the Yankees. This is Alex's house; I just visit from time to time, doing the best to live up to his legacy.

Mutts payroll is $340 million at the moment. Tier 4 is $290 million after which super duper penalties apply. The Boss must be spinning in his grave.

[8] That's what kills me about Hal.
You have a baseball team that basically prints money and controls its own media. You are (I assume) financially secure for life. What's stopping you from throwing money at it?

My hobbies are cheap: music, movies, books, running. That's where my play money goes. Cohen has an expensive hobby and he seems to care about it.

Yankees land Rodan, er Rodon. 6years, is one more than I like, but $27 million per is fine.

⬆️Agree, Boat!
So they get Rodon, nice.

I must be too Yankees-centric. If I was asked who Carlos Rodan was anytime other than the last 2 weeks I would have been clueless. Welcome aboard to the new southpaw. Don't suck.

[12] I was thinking the same exact thing. Not until this free agent season did I have any idea who Rodon was. Once upon a time I had to watch SportsCenter or Baseball Tonight every night to keep track of the Yankees, so all the rest seeped in through osmosis. That's no longer the case.

[13] I vaguely recall him whupping the Yankees when he was on the White Sox. That could be my imagination.

(15). You’ll have to deal with his 2 extremely petite singing female agents.

Benintendi is off the board. Dang.

I hope we don't enter the season with both Hicks and Donaldson. At least Donaldson still has the "D" but his personality issues negate that.

Who's in left
Idunno's on third.

Twins sign Gallo for a year, $11M.
So at least we're safe on that score.