Back to the Dock 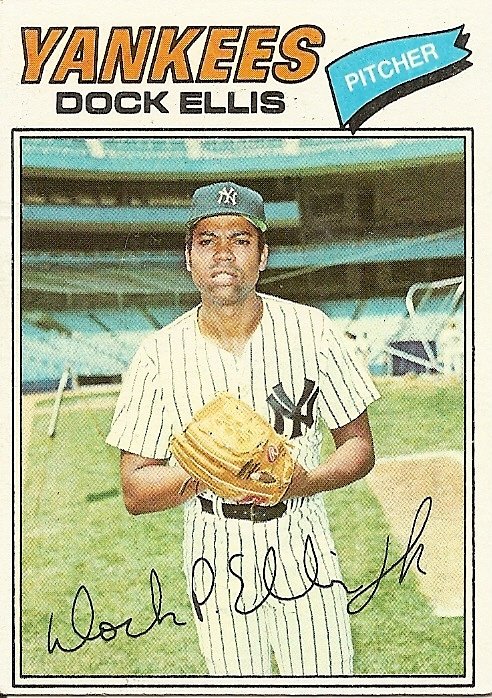 Dock Ellis is back in amination.

We now know that Mark Teixeira will play first base and bat third (or possibly fourth) in the Yankees’ revamped lineup, but what effect will his addition have on the rest of the lineup’s configuration? The Yankees need to find a new role for Nick “Son of Steve” Swisher, who was originally targeted to play first after being acquired for Wilson Betemit. They also need to figure out roles for Xavier Nady and Hideki Matsui, while deciding who will play center field on a regular basis.

In the aftermath of the Teixeira signing, I’ve heard a number of observers suggest that the Yankees will put Swisher in center field, sandwiched between Johnny Damon in left and Nady in right. That alignment would maximize the Yankees’ offensive potential, but would also leave them with a below-average defensive center fielder, continuing an unsavory tradition that first began with Bernie Williams’ declining years.

Another potential solution would be to trade one of the following: Swisher, Nady, or Matsui, thereby alleviating the logjam in right field and DH. I’m not necessarily against that possibility, but only if the Yankees can acquire something of value for one of those players, specifically a center fielder or a backup catcher, or a useful pitcher. There should be no giveaways here; if the offers for Nady, Swisher, and Godzilla are subpar, keep them all. There’s nothing wrong with having one of these veterans on the bench each day. The Yankees have operated without a competent bench for far too long.

Here’s the alignment I’d prefer, one that would make defense and flexibility higher priorities. I’d put Swisher in right field, where he would platoon with Nady. I’d tell Nady to bring his infielder’s glove to spring training and be ready to put in work as a backup at both the hot corner and first base. Matsui would remain in the DH role, where he would give way to Jorge Posada on days in which the Yankees faced left-handers. And then I’d hand the center field reins over to Brett Gardner, who gives the Yankees the most range and speed of any of their outfielders. If Gardner, batting ninth, ends up a failure against major league pitching, then the Yankees can always try Melky Cabrera or Swisher later in the season.

Defense, flexibility, and the bench. Those should be the Yankees’ points of emphasis. Either directly or indirectly, Teixeira will help all three areas…

END_OF_DOCUMENT_TOKEN_TO_BE_REPLACED

The world of baseball lost one of its most colorfully eccentric characters on Friday, when former Yankee Dock Ellis died from liver failure. A mere 63 years of age, Ellis managed to pack more “living” (both good and bad) into those years than most of us could have done in a hundred and 63 years.

The following are excerpts from my original manuscript on the 1971 Pirates, a team that featured Ellis as one of its most central figures. We’ll miss you, Dock.

The veteran right-hander certainly possessed the repertoire of a winning pitcher: a fastball that ran away from right-handed hitters, a sinking fastball, an effective but sparingly used breaking ball and a tenacious mindset. In one of his 1970 regular season starts, Ellis had demonstrated all of his talents at their peaks. On June 12, he had forged a no-hitter against the San Diego Padres, overcoming eight walks, a hit batsman, and several bases-loaded situations. His lone post-season start also showcased his occasional brilliance. In a playoff game against the Reds, Ellis concluded his season with nine innings of shutout pitching, before falling to fatigue and giving up three runs in the 10th to lose the game—and the series.

While Ellis possessed many talents, his resume also carried several red flags. The owner of a fragile right arm, Ellis [in 1970] had missed six weeks in August and September with elbow soreness, which cast some doubt on his health heading into the new season. Ellis had also proven to be a source of controversy. He had criticized the Pirate coaching staff for a failure to detect an unnatural change in his pitching motion and had feuded off and on with Pittsburgh-area writers. More significantly, Ellis possessed a dark side that had not been fully revealed to the public; the 26-year-old pitcher was using a variety of drugs. As he would disclose many years later, he had pitched his no-hitter against the Padres under the severe influence of LSD. Ellis had also taken prescription drugs Benzedrine and Dexamyl within two hours of his masterpiece at San Diego Stadium.

Just a few weeks earlier, Ellis had made headlines by predicting that he would not be selected to start the All-Star Game. Ellis had reasoned that with American League manager Earl Weaver likely to select the sizzling Vida Blue as his starter, baseball’s powers-that-be would want at least one white pitcher starting the midsummer classic in Detroit. “They wouldn’t pitch two brothers against each other,” Ellis told a reporter from the New York Times. Ellis also offered a secondary reason for a possible snub. “Sparky Anderson [the National League manager] doesn’t like me.”

Much to the pitcher’s surprise, Anderson announced that Ellis would start and would indeed face Blue in Detroit. Anderson denied that Ellis’ comments had, in any way, swayed his decision. “His 14-3 record and the fact that he hasn’t pitched since last Tuesday is what forced me to choose him,” Sparky told the New York Times, while defending Ellis’ outburst against him. “I think everybody has a right to say what he wants.”

In response to his outburst, Ellis received a number of angry letters from fans, who criticized him for being so presumptuous about Anderson. Ellis also received at least one positive letter—which came from the major leagues’ first African-American player of the 20th century. “I don’t mind those [negative] letters,” Ellis told The Sporting News, “but there was one letter I was particularly pleased with. Jackie Robinson wrote me a letter of encouragement. I met him last April in New York, and then I received this letter from him.”

On Tuesday, July 13, just hours before the start of the All-Star Game, Ellis offered no apologies for his recent remarks doubting the possibility of African-American pitchers starting the national pastime’s showcase game. “When it comes to black players, baseball is backwards, everyone knows it,” Ellis told a reporter from the New York Times. “I’m sort of surprised that I am starting, but I don’t feel my statements had anything to do with it.” Ellis also seized the opportunity to complain about the lack of endorsements for black athletes, compared to the commercial opportunities given to white players. A reporter asked Ellis if he had received any endorsement offers in light of his brilliant pitching in the first half of the season. “Aw, man, c’mon,” Ellis said incredulously. “Come to me for endorsements?”

Later in the season, Ellis would complain that black players received less attention from the media and less promotion from the front office than white athletes of similar ability. Ellis brought up several examples from the Pirates’ own roster. “Bob Moose and I are the tightest,” Ellis told Phil Musick of Sport magazine, “but when he came up, he was a phenom. Richie Hebner, he was Mr. Pie Traynor. Why don’t they publicize black players like that?”

Throughout his life, Ellis had bristled at racist treatment. During his first spring training in 1964, Ellis said he had argued or fought with seven different teammates who had used ethnic slurs in conversing with him. Seven years later, such instances of face-to-face racism still bothered Ellis, but he had learned to use restraint. During the 1971 season, Ellis and a black friend visited a high school that had been affected by racial divisions. On the way to the school, a police officer called out to the two men, referring to them as “boys.” “That’s where I’ve changed,” Ellis told Sport Magazine. “Three years ago, I would’ve jumped on the cop’s chest. But all I did was to correct him.”

Ellis, who would eventually be featured on the cover of the August 21st issue of The Sporting News, had emerged as one of the National League’s most dominant pitchers—and one of its most intriguing personalities. While some black players shied away from public discourse of their own Afrocentric world views, Ellis reveled in such discussions. In an article in Sports Illustrated, Ellis explained the significance of his daughter’s Swahili name, Shangaleza Talwanga. Ellis, one of three black pitchers on the Pirates at the time, explained that it meant “everything black is beautiful.” In the Pirates’ clubhouse, Ellis enjoyed listening to loud music that he labeled “funky.” On the field, when preparing to take his at-bats during games he pitched, Ellis donned a fuzzy batting helmet, which he referred to as “velvetized.”

At times, though, Ellis’ behavior bordered on the bizarre. Two years later, in perhaps his most celebrated incident, Ellis would walk out onto the field before a game against the Cubs wearing a head full of hair curlers. “I think the big thing with him when he come out on Wrigley Field with the hair curlers,” recalls Richie Hebner, “is that when he did that, other than surprising a lot of people at Wrigley Field, it surprised a lot of guys on the Pirate team. When I saw it, I said, ‘What the hell is this?’ ” Commissioner Bowie Kuhn reportedly conveyed his unhappiness over the hair curler episode to Bill Virdon, who by now had succeeded Danny Murtaugh as the Pirates’ manager. Virdon, relaying the commissioner’s message, told Ellis to cease his practice of wearing the curlers on the field. “Look, Dock,” Virdon said, “I don’t care what you wear, but the front office doesn’t like it, the umpires don’t like it, and if you’re not careful, you’re going to get fined.”

Bob Robertson recalls his own involvement in the hair curler episode. “[The manager] comes to me and says, ‘Go out and ask Dock why he’s got those curlers in his hair?’ So I did. And I think, if I can remember correctly, Dock said, ‘That’s me. Those are my curls.’ And that was about it. So I went back and told [Virdon] and that was the end of that stuff.” Much to Virdon’s delight, Ellis would not wear the hair curlers on the field again.