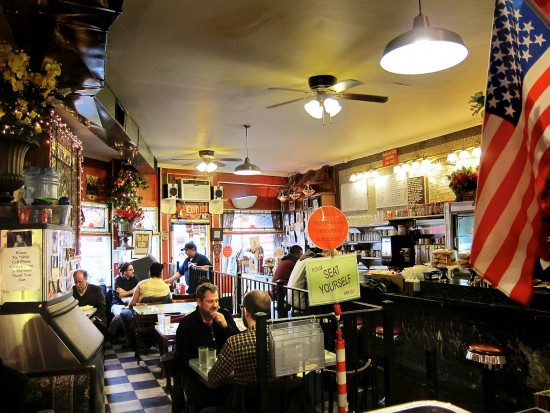 From Douglas Martin in the Times:

On Saturday mornings, Tom’s restaurant in Brooklyn is so popular that people line up outside just to be served old-fashioned diner cuisine like chocolate egg creams and all manner of pancakes. It’s been that way for years, and until the owner, Gus Vlahavas, died this month at 76, the patrons’ patience was rewarded with the free coffee, cookies, sausage bits and orange slices he handed out while they waited.

Mr. Vlahavas started working at Tom’s, which opened as an ice-cream parlor under a different name in 1936, when he was 9 years old. He stayed for more than 60 years, lovingly molding it into a homey Brooklyn family institution before retiring in 2009.

He died of respiratory complications on Nov. 4 at Columbia University Medical Center in Manhattan, his daughter, Beth Vlahavas, said.

Changelessness was the stock in trade at Tom’s, right down to the décor, including a half-dozen American flags and bright plastic flowers on the tables. It has had only one address since it was opened by Mr. Vlahavas’s paternal grandfather: 782 Washington Avenue.