The fact that I lived through my experience at “L.A. Law” and had an on-screen writing credit to show for it gave me a seal of approval: “You worked for Steven Bochco? You’re just the guy we’ve been looking for.” It didn’t seem to matter that I’d just hit town and barely knew my hip pocket from a teakettle when it came to screenwriting. That’s how much clout the man had.

Steven made the call that got me in the door with his mentor, Bill Sackheim, at Universal. Sackheim was an embraceable curmudgeon who’d been through the wars in both TV and movies, writing westerns for Audie Murphy and Joel McCrea, producing and co-writing “Rambo,” and dealing with the nightmare that was Sally Field in her “Gidget” days. It didn’t take long for me to realize that time spent with him would be an education, and believe me, I needed educating, especially in the art of constructing a story for the screen.

But while I was trying to develop an idea for a Sackheim project about newspaper reporters, I got a call from a young “Miami Vice” writer named Mike Duggan. I’d met him at Jacob Epstein’s 30th birthday part, and here he was not three weeks later, telling me his boss was looking for someone to help write a two-parter about boxing. Once again the stars were aligned.

In less than two hours, I was in “Vice’s” offices–Building 69 on the Universal lot–meeting Dick Wolf, who was running the writing staff. The very same Dick Wolf who would go on to create “Law & Order” and all its spinoffs. He’d come over from “Hill Street Blues,” where he had clashed famously with the brilliant but erratic David Milch. In his spare time, he was producing two movies he’d written. I don’t know when he slept, but he always walked around grinning like the kid who got the most toys at Christmas.

I shook hands with Dick, and then he introduced me to an amiable, prematurely gray guy who was just about to leave: Kerry McCluggage. Kerry was “Vice’s” supervising producer that afternoon; two days later he was named president of Universal Television. Just like that, I was on a first-name basis with one of the most powerful people in the business. When I’d bump into him on the lot, he’d always say hello and ask about the show, as if I really knew anything about what was going on.

On that first Saturday, however, all that mattered was making a good impression and getting the assignment. I spun a couple yarns about Muhammad Ali and then a few about Don King, and I knew I had scored when Dick showed me the story for the first of the two boxing episodes and asked what I thought of it. I pointed out a few things he had wrong and he didn’t try to debate me, didn’t even flinch; he just fixed them. Then he said, “Okay, we need the script by Tuesday.”

Dick looked at me, still grinning, but there was a question in his eyes that I have to believe involved whether or not I would run out of his office screaming when I heard the deadline. He was asking me to do a rush job, but I’d spent 16 years in newspapers doing rush jobs. This would simply be one for higher stakes.

“Then you do acts two and three. I’ll do one and four.”

The race was on. I hustled back to Le Parc, where I was staying again, and started hammering away on my Olivetti. I didn’t stop until Tuesday morning when Dick swung by the hotel and I ran out the front door to hand him what I had written. A couple of hours later, he called to say I had passed my trial by fire.

I should point out that the script Dick and I lashed together in three days wouldn’t be the one we shot. It would simply be something the production team in Miami could work off for casting, location scouting, and that sort of thing. While all that was being taken care of, Dick and I went to work on a rewrite that was a far better piece of work. 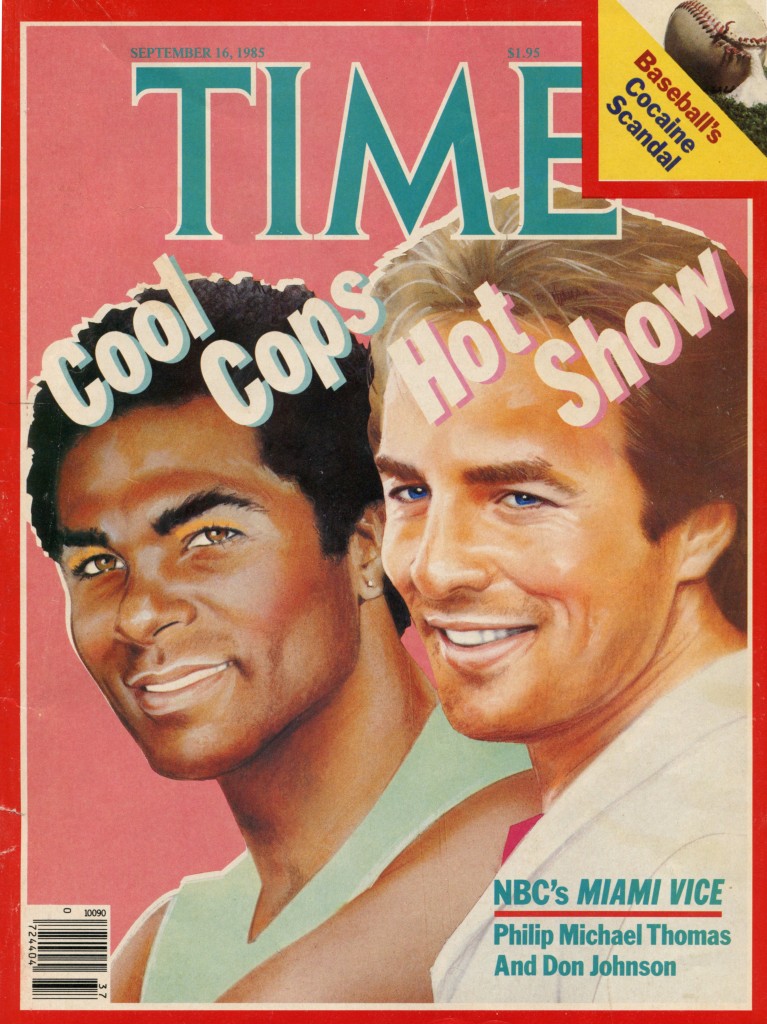 “Miami Vice” was in its third season when I showed up, and no longer had the heat it did when its stars, Don Johnson and Phillip Michael Thomas, made the cover of Time and established Crockett and Tubbs in the national lexicon. But I was still in tall clover. I didn’t even mind that I was working in a spare office full of the empty cardboard boxes that signified the previous occupant’s failure. Every time I finished rewriting a scene, I’d trot it down to Dick’s office. Halfway through the process, he looked at me (grinning, of course) and said, “I don’t know where you learned to do it, but you know how to get into a scene and out of a scene.” All those years of reading W.C. Heinz, Jimmy Breslin and Gay Talese, the masters of the scene in journalistic form, were paying off. They had always relied on the tools of drama–character, dialogue, the kinetic energy of the moment–and just as I had followed their lead in my newspaper and magazine work, now I was doing it in a medium where the scene was everything.

There were other links to my not-so-distant past as well. Our cast featured rowdy heavyweight Tex Cobb, Olympic champion Mark Breland, and the one and only Don King. I put words I’d heard King say in his character’s mouth, and he made a hash of them. Stuff like “afoxanado” and “low and scurrilous cad.” I even had him say someone was “matriculating on the veranda.” Everything was set up to make King look great. And he whiffed, the big goof.

Cobb was an infinitely better thespian, which should come as no surprise to anyone who remembers him in the Coen brothers’ “Raising Arizona.” My fondest memory of him, of course, is that he was the first man I killed on TV. But far more thrilling than that was hearing Crockett and Tubbs saying my words, and seeing the stylized shot of three killers swaggering through a gymnasium door with bad intentions, lit perfectly, with clouds of man-made fog wafting in for atmosphere. It was pure “Miami Vice.”

I got all those mental keepsakes, and a full-time job, too. Dick hired me as a staff writer, and then he and I set to work on the second of the boxing episodes. Or maybe we wrote part two first. Things were moving so fast that they blur in my memory. The one thing I’m absolutely certain of is how lucky I was as I sat in my office, now clear of boxes, and banged out my half of the next script. Without realizing it, I had hopscotched past thousands of writers who would have sold body parts and family members to be where I was.

Man, I remember when "Miami Vice" was THE show. When my mom got remarried in 1986 you know I was sporting a white blazer like Sonny Crockett.

Fascinating post. There's a reason Schulian is known as "Professor."

4) He was great as Smalls. I love when he tosses the grenade at the bunny rabbit.

Miami Vice only gets cooler with age, I'm thoroughly convinced of this.

Oh, John, the stars are always aligned, we just have to look up. Love this stuff!