Here We Go Round Again 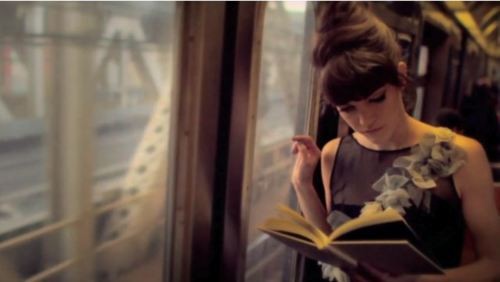 Found a couple of intriguing posts about a new book, “On Rereading,” by Patricia Meyer Spacks.

First, from Nathaniel Stein at the New Yorker’s Book Bench:

“One cannot read a book: one can only reread it,” Nabokov said. I thought of that line while reading “On Rereading,” Patricia Meyer Spacks’s charming and strange blend of memoir, literary criticism, and scientific treatise. Spacks, a literature professor and a former president of the American Academy of Arts and Sciences, systematically revisits “The Wonderful Wizard of Oz,” “The Catcher in the Rye,” “The Golden Notebook,” the novels of Jane Austen, and other milestones of her reading life. She hopes to justify the usefulness—or at least to solve a bit of the mystery—of an activity that she loves but also, at times, doubts.

Few would question looking at a great painting twice, or watching a favorite movie again and again. But, perhaps because rereading requires more of a commitment than giving something a second look, it is undertaken, as Spacks puts it, “in the face of guilt-inducing awareness of all the other books that you should have read at least once but haven’t.” It engages, she fears in her darker moments, a “sinful self-indulgence.” Never mind Nabokov, or Flaubert, who marvelled at “what a scholar one might be if one knew well only five or six books.”

And here is Lisa Levy, over at The Millions:

In his often anthologized essay “On Reading Old Books,” William Hazlitt wrote, “I hate to read new books. There are twenty or thirty volumes that I have read over and over again, and these are the only ones that I have any desire to ever read at all.” This is a rather extreme position on rereading, but he is not alone. Larry McMurtry made a similar point: “If I once read for adventure, I now read for security. How nice to be able to return to what won’t change. When I sit down at dinner with a given book, I want to know what I’m going to find.” In her recent study On Rereading Patricia Meyers Spacks uses McMurtry as an example of someone who rereads to stubbornly avoid novelty, and unapologetically so. His refusal, like Hazlitt’s, to read anything new makes rereading a conservative if comfortable experience, vehemently opposed to the possible shock of the new.

Spacks herself feels slightly differently. She writes, “No reader can fail to agree that the number of books she needs to read far exceeds her capacities, but when the passion for rereading kicks in, the faint guilt that therefore attends the indulgence only serves to intensify its sweetness.” In Spacks’s scenario rereading is a forbidden pleasure, tantalizing and, contra Hazlitt and McMurtry, with an element of time wasted — an extravagance. The choice Hazlitt and McMurtry easily make weighs more heavily on Spacks, who knows she forgoes a new book every time she picks up an old one.

Yet there are far more positive spins put on rereading in Spacks’s book and elsewhere. Pleasure, after all, needn’t be a negative. Elsewhere in his essay, Hazlitt brings up a point which is raised often by rereaders: “In reading a book which is an old favorite with me (say the first novel I ever read) I not only have the pleasure of imagination and of a critical relish of the work, but the pleasures of memory added to it. It recalls the same feelings and associations which I had in first reading it, and which I can never have again in any other way. Standard productions of this kind are links on the chains of personal identity. They are landmarks and guides in our journey through life.”

I am not a voracious reader of fiction and have only read one novel, “The Sound and the Fury,” more than once. But I re-read non-fiction all the time, especially essays and articles. I like the idea of revisiting a novel, to see how my feelings may have changed but also as a way to remember where I was when I first read it.

Another project. I’m down.

I used to re-read "Naked Lunch" every year. ("I can think of two things wrong with that title!") Each time I felt like I took more away from it, finding quality on re-reads where I initial only got some mixture of shock, titilation, and inspiration. I haven't read it in nearly 20 years though - I should do so again. I tried to re-read "On the Road" during a road(ish) trip with my Dad, and I couldn't get through it. I remember loving that book first time around too.

I think it would be interesting to reread "The Catcher in the Rye" only because I have such a specific memory of where I was--on summer vacation at my grandparent's home in Belgium--when I first read it.

i read more fiction than non-fiction.
i don't think i have ever re-read a fiction book, but maybe i am forgetting some. i have re-read a handful of non-fiction books, mostly because i thought they were really interesting and felt i missed something the first time.
one of these days i would like to re-read some classics i read in high school or college but that i have either completely forgotten or didn't understand/appreciate the first time.
but on the whole i am not into re-reading.

I have never had the discipline to finish a book I didn't like (to be fair I often didn't finish novels that I did like, too). So many of the books I was supposed to have read in high school and college and faked. So I've only read parts of "The Great Gatsby," for instance. Never mind rereading I'd like to just read it one day.

As a guy who started a book review blog last year at the behest of a publisher, I have not bothered to reread much in the last two-to-three years. I understand the urge completely, however. I have returned to "Persuasion" by Jane Austen (her best) - I keep it in reserve, as it were, as requests from the library become available. I feel a certain amount of pressure to work on new things because of the blog. But I am planning to go back to "Huckleberry Finn" and to "Plainsong" by Kent Haruf, and to others.

[4] Gatsby is one of the few novels I have re-read (and more than once). I can totally relate to abandoning books I've started, but Gatsby's so damn good I come back to it every decade or so.

I love re-reading. Especially when alone at dinner time, pick up something and open to any page, just dive in. Anything by Jose Saramago, early Salman Rushdie, Martin Cruz Smith, Soseki Natsume.

Like AB said, can't stomach getting through books I find dull. Don't think I made it past page 50 of "Brothers Karamazov"..those Russian novels take stamina I don't have!