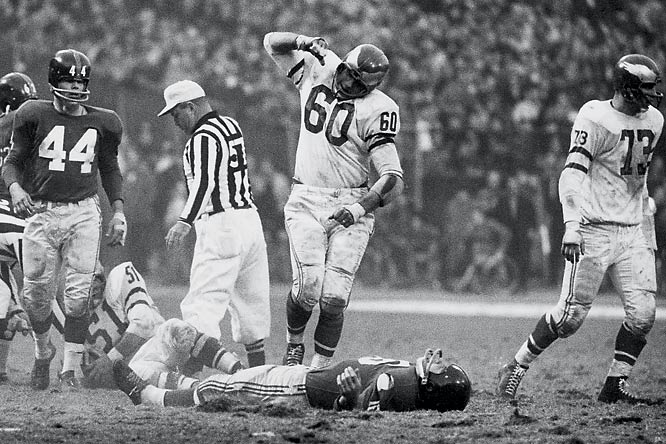 The Giants play the Eagles tonight. In honor of this old rivalry, check out our pal John Schulian’s classic portrait of Chuck Bednarik:

He really was the last of a breed. For 58 1/2 minutes in the NFL’s 1960 championship game, he held his ground in the middle of Philly’s Franklin Field, a force of nature determined to postpone the christening of the Green Bay Packers’ dynasty. “I didn’t run down on kickoffs, that’s all,” Bednarik says. The rest of that frosty Dec. 26, on both offense and defense, he played with the passion that crested when he wrestled Packer fullback Jim Taylor to the ground one last time and held him there until the final gun punctuated the Eagles’ 17-13 victory.

Philadelphia hasn’t ruled pro football in the 33 years since then, and pro football hasn’t produced a player with the combination of talent, hunger and opportunity to duplicate what Bednarik did. It is a far different game now, of course, its complexities seeming to increase exponentially every year, but the athletes playing it are so much bigger and faster than Bednarik and his contemporaries that surely someone with the ability to go both ways must dwell among them.

Two-sport athletes are something else again, physical marvels driven by boundless egos. Yet neither Bo Jackson nor Deion Sanders, for all their storied shuttling between football and baseball, ever played what Bednarik calls “the whole schmear.” And don’t try to make a case for Sanders by bringing up the turn he took at wide receiver last season. Bednarik has heard that kind of noise before.

“This writer in St. Louis calls me a few years back and starts talking about some guy out there, some wide receiver,” he says, making no attempt to hide his disdain for both the position and the player. “Yeah, Roy Green, that was his name. This writer’s talking about how the guy would catch passes and then go in on the Cardinals’ umbrella defense, and I tell him, ‘Don’t give me that b.s. You’ve got to play every down.’ “

“Concrete Charlie,” is also featured in Schulian’s recent collection: Sometimes They Even Shook Your Hand.