Color By Numbers: A King And A Prince 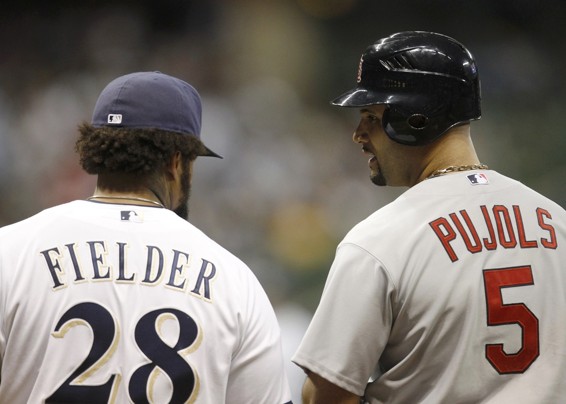 So far, the Hot Stove has resembled more of a cold shoulder. Despite some very high profile names, the early transactions this offseason have mostly involved a myriad of middle infielders and back-up catchers. Although the wheeling and dealing should ratchet up a notch during next week’s Winter Meeting, the relative silence to this point has been a little surprising.

Among all the free agents available on the market, Albert Pujols is the cream of the crop. However, with the exception of a recent report about interest from the Cubs, there hasn’t been much talk about where the three-time MVP will wind up. In fact, there was more early speculation surrounding Pujols last year, when he and the Cardinals flirted with a contract extension.

There are two factors complicating Pujols first crack at free agency. The first one is the major market teams either already have a big ticket first baseman (Yankees and Red Sox) or are currently embroiled in a financial morass (Dodgers and Mets). The second factor is the free agency of fellow first baseman Prince Fielder, who is not only four years the junior of Pujols, but, in 2011, actually had a better season with the bat than the Cardinals’ stalwart. Despite some of the concerns about Pujols emerging mortality, it’s worth noting that while his OPS+ of 150 was the lowest of his career, that level of production was still eighth best in the National League (and higher than Fielder’s career rate of 143). That some would consider his 2011 campaign worthy of a red flag indicates how historically spectacular Pujols’ career has been.

Most Seasons as OPS+ League Leader *Was the leader in both the American and National Leagues.
Source: Baseball-reference.com

Only seven players with at least 3,000 major league plate appearances can boast an OPS+ higher than Albert Pujols’ career rate of 170, and all of the names ahead of him qualify for the inner circle of baseball’s immortals. On a per season basis, Pujols has led his league in OPS+ on four different occasions (including three straight seasons from 2008 to 2010), an accomplishment bettered by only 12 other players.

Intuitively, most people have regarded Pujols as the best hitter, if not best player, in the game, at least up until last year. Instead of awarding that title subjectively, however, I thought it might be interesting, and fun, to pass the torch using statistics. For this purpose, OPS+ seemed like the best metric to use. Although there are other statistics like wOBA that better measure overall offensive performance, OPS+ still has the advantage of being more well known, easier to compute, and adjusted for ballpark and era. Also, instead of taking one-year snapshots, sustained periods of excellence seemed more appropriate. Is 10 years the right barometer? That can be debated, but if it’s good enough for the Hall of Fame, it’s good enough for me. Based on the chart above, Pujols has been a Diamond King for the past four seasons, joining a royal lineage that began with Nap Lajoie and almost exclusively includes undisputable legends. A quick scan of the list reveals all the names you’d expect to be included: Honus Wagner, Ty Cobb, Rogers Hornsby, Babe Ruth, Lou Gehrig, and so on. However, there are some surprises. Bill Nicholson is probably a name not well known even among many diehard fans, but for three 10-year periods, he ranked as the top hitter in the game. Of course, his era of dominance happened to coincide with World War II, which, at the risk of disparaging his accomplishment, probably explains his inclusion. The only other ranking member of the list who isn’t in the Hall of Fame (excluding those not yet eligible) is Dick Allen, who was the top dog for four 10-year periods. Unlike with Nicholson, however, there is no extenuating circumstance. Allen’s career OPS+ of 156 ranks among the 20 best all-time, which makes his Cooperstown snub one of the most unfortunate.

Two other unlikely names who can lay claim to an OPS+ crown also happen to be former Yankees. Although no one would dispute that Wade Boggs and Rickey Henderson were all-time greats, their presence atop a list that disproportionately favors sluggers is somewhat surprising. Nonetheless, it does help to illustrate how complete their offensive games really were. In many ways, Henderson and Boggs are two of the most underrated Hall of Famers, even though most people hold them in very high regard.

Finally, the biggest surprise from the list above is one who is not included: Ted Williams. If the threshold considered had been 4,000 plate appearances, Teddy Ballgame would have been front and center for most of his career. However, because of his two stints as a fighter pilot in the Marine Corps, the Splendid Splinter never qualified. I like to think his exception proves the rule.

Pujols’ status as one of the greatest hitters in baseball history isn’t exactly a secret, but it’s still impressive to consider his body of work within the context of the all-time greats. Entering his age-32 season, the future first ballot Hall of Famer may no longer be in his prime, but if continues to keep the same company he has enjoyed for his entire career, there’s no reason to think his twilight will be a flicker.

Where will Pujols end his career? In St. Louis? How about Chicago? Pinstripes might look nice. Regardless, Prince Albert remains the King, and my bet is he isn’t yet ready to submit to a succession.

Still can't see him leaving St. Louis. This would be a whole lot more interesting if the Yanks and Sox were possible suitors.