Jorge Posada still hasn’t made his decision official, but it’s become common knowledge that he has decided to retire rather than continue his career as a backup catcher in Tampa Bay, Baltimore, or Philadelphia. While I would never begrudge a player who wanted to prolong his career as much as possible, there is some artistic symmetry in Posada beginning and ending his playing days in the same place.

Posada represents the latest in a long line of great Yankee catchers, a succession that began with Bill Dickey before continuing with Yogi Berra, Elston Howard, and Thurman Munson. Dickey and Berra are members of the Hall of Fame, Howard and Munson are not, and Posada will become the focal point of what should be an interesting five-year debate over his worthiness for the Hall of Fame.

The comparison of Posada and Munson has long fascinated me. Based strictly on OPS (.848 to .756), one would conclude that Posada was the superior of the two. Posada certainly had more career value, thanks to luck and longevity. But using an eyeball approach–assuming you’re old enough to have seen both players–Munson was the better player, especially when you factor in the areas of fielding and baserunning.

As much as I like Munson, he just didn’t have the career longevity that is needed for a Hall of Fame player. I would also vote “no” on Posada’s entrance into Cooperstown, though I’m open to change my mind. The relatively late start to his career, along with his defensive deficiencies and baserunning misadventures, render him just short of my personal Hall of Fame line. But that should not be interpreted as some kind of insult. Any player who is even considered for the Hall of Fame is a player of achievement, a player of longevity, a player who is worthy of praise and appreciation. Posada’s offensive excellence—encompassing his ability to hit with power, draw walks, and do damage from both sides of the plate–made him a modern day version of Ted Simmons.

And let’s not forget that early in his career, Posada was a respectable receiver who generally developed good rapport with his pitchers. For every A.J. Burnett, there have been dozens of pitchers who came to trust and rely on Posada’s enthusiasm, passion, and leadership abilities. By all accounts, Posada has been a good and well-liked teammate who has blended well with the vast array of personalities the Yankees have had over the last 15 years.

Posada’s career path is rather remarkable given its origins. It’s worth noting that he was not a highly touted player when first signed by the Yankees. He was a 24th round selection in 1990. He started his professional career as a second baseman with the Oneonta Yankees, a short-season Class-A franchise in the NY-Penn League, before someone in the organization had the foresight to convert him to catcher. When the Yankees first brought him to the major leagues, they often used him as a pinch-runner. It’s almost as if the Posada of the 1990s was someone else, some alien life form who possessed the powers of self-transformation. I guess his makeover is proof that players are adaptable, than they can evolve, and that a longshot can become a success in the game of major league baseball. 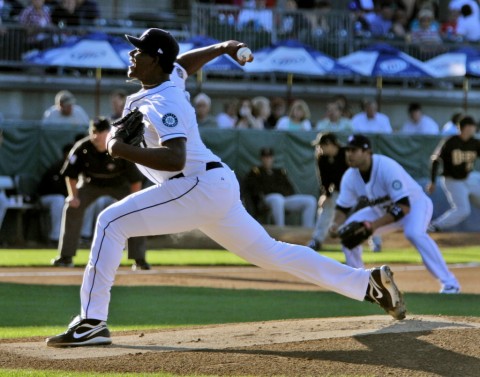 I think I’ve been as big a booster of Jesus Montero as anyone who writes for The Banter, so you might expect that I’d be unhappy with the trade that sent him and Hector Noesi to the Mariners for Michael Pineda and Jose Campos. Granted, I’m a little disappointed that I won’t have the opportunity to see Montero play every day in pinstripes, primarily because I think he is going to be a star hitter, the kind of player who will hit .300, slug .500, and carry a team’s offense for days at a time.

As much as I like Montero, I love the trade. Scouts praise Pineda the way I rave about Montero. At six-feet, seven inches and 260 pounds, he’s been described as a “monster,” even as a “leviathan,” which may be the first time I’ve heard that word used to refer to a ballplayer. (He looks like a bigger version of Lee Smith, if such a thing is possible.) With his 95 to 98 mile-an-hour fastball and bone snapping slider, Pineda makes mitts pops and heads turn.

If Pineda duplicates the way he pitched for the Mariners, particularly over the first half of the season, the Yankees have a perfectly formidable No. 2 starter. If he adds a third pitch to his repertoire and pitches to a reachable higher level, he becomes a full-fledged No. 1 starter, someone who can eventually wrestle with CC Sabathia for the mythical top spot of the Yankee rotation.

As a bonus, the trade with the Mariners also netted Campos, whom some scouts project to be better than Pineda. With his smooth delivery and live fastball, the 19-year

-old right-hander will start the season at Single-A ball, but could move up to Double-A by midsummer.

While the Yankees often deal prospects for established veterans, they don’t often make trades where they deal young talent for young talent. In fact, I can’t remember Cashman making this sort of transaction in the past. This deal reminds me of the 1978 trade in which the Yankees traded Mike Heath, a highly touted young catcher, to the Rangers for a power-throwing left-hander named Dave Righetti. (The deal also included a longtime veteran in Sparky Lyle, but Heath and the three other prospects going to Texas were really the keys to the trade.) Righetti became a serviceable starter before Yogi Berra made the controversial and still-debated decision to move “Rags” to the bullpen, where he had some level of success but never became a dominant closer.

I think Pineda will turn out to be a better pitcher than Righetti. He’ll need to stay healthy, and have some luck along the way, but I think his chances of success are pretty good. With Pineda and the bonus addition of free agent Hiroki Kuroda, the Yankees now have their deepest rotation since the days of Clemens, Pettitte, Mussina and Wells…

As with any trade, the Pineda deal leads to the inevitable question: what is the next move? The subtraction of Montero leaves the Yankees without a DH. Joe Girardi has said he wants to rotate some of his resting veterans into the DH slot, but that’s not a fulltime proposition that can be sustained through 162 games. There will be plenty of days when the Yankees will want–make that, need–a proper DH who can put up some raw numbers. Two free agent candidates appear to be at the top of the list. They are Johnny Damon and Carlos Pena.

I’d be fine with either one on a reasonable one-year contract, but my preference would be Pena. At 33, he’s five years younger than Damon, outslugged him by 44 points in 2011, and has a history of launching long balls at Yankee Stadium. With 28 home runs and 101 walks for the Cubs in 2011, Pena fits the Yankee offensive blueprint to a tee.

Pena can no longer hit for much of an average, and he must be platooned, because he’s become like Oscar Gamble against left-handed pitching. The Yankees have a solution for that in the re-signed Andruw Jones, whose prowess against left-handed pitching has been well documented. A Jones/Pena platoon would be an ideal fit for the seventh position in the Yankee batting order.

On the other hand, Damon still has something to offer. He can hit the long ball (16 home runs) and can still steal a base (19 stolen bases in 2011). He would bring more of a contract presence to the lineup, an ingredient that was sometimes missing in 2011. And we know that Damon would have no trouble fitting into the clubhouse dynamic or dealing with the New York City press.

Damon or Pena, which is your choice?

Bruce Markusen writes “Cooperstown Confidential” for The Hardball Times and can be found from time to time on Facebook.

Thanks, Bruce, for this great piece. I wrote last fall about how excited I was to see Montero after waiting so long (and, coincidentally, about how disappointed my daughter was about his arrival and what it meant for Posada). Not surprisingly, I was sad to hear about the trade, but thanks to your analysis and some time to think about the long term aspects of the deal, I'm feeling better about it.

As for Peña vs. Damon, put me down for another round of Johnny D. Let's say he has a successful season. Then we get to spend next off-season debating whether or not he should be brought back to get his 3,000th hit in a Yankee uniform. That, at least, would make for some entertaining debate.

nothing against Damon, I like him and wouldn't grouse if we got him back - but at his age, given his calf problems, I think he's better left in the climate-controlled environs of Tampa.
Not knowing the Rays roster I think he's a perfect fit there, and I'm surprised he's still available.

I really like the Jones/Pena platoon idea. Couple veteran mashers for the bottom half of the order. Yes, please. They've got to get Jones more at bats this year. There's a lot of life left in that stick, and as Bruce points out, Pena is a beast in the Bronx

It'll be a DH round robin for sure.

Pena would be great, but $10m for a 2/3rds DH? It would put our payroll over $220m. He ain't very good out there, but at least JD acts as a BU-OFer, and he can still run 'smartly'. Pena is a better option, but the difference shouldn't be that great.

As a side note, JD was much better last year against LHP, so that does not work in his favor.