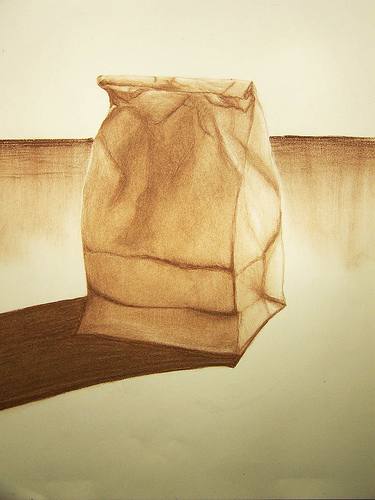 A pair of sisters walked onto the train at 145th st this morning. I pegged them at eight and twelve. They both carried brown paper bags and the younger sister opened her bag and extracted a muffin. She raised it to her mouth with her right hand and took a bite. As she ate, her left hand lost interest in holding the bag and she dropped it to the floor.

Our eyes followed the bag to the floor and then as we reset our viewpoints, we found ourselves staring at each other. There was a fraction of an instant of panic in her eyes as she realized that I witnessed her blatant littering. She recovered quickly and replaced the panic with confidence, perhaps remembering that littering is not a crime and that I was not a cop.

I took her confidence as a challenge, though one I had no desire to take up. I don’t like littering, but I had already spent half an hour trying to get children to listen to me earlier this morning without any hint of success, and those children depend on me to delineate the borders of the DC and Marvel Universes and to unlock the cabinet containing the cereal. This little girl doesn’t need anything from me.

I did not accept her challenge, but I also didn’t want to let her off the hook completely. I searched for a facial expression that could convey disappointment and rejection at the same time. My go-to is a ponderous head shake, eyes closed, with a slight frown. Too engaging for this situation. I thought of an exaggerated frown. But it seemed like that was an admission of defeat rather than a dismissal.

I settled on a quick combo. A heavy eye roll and a weird lip scrunch. I wanted it to say “Whatever. Litterer.”

I don’t think it worked, and I’m sorry that somebody else to pick up the brat’s garbage, but I’m glad I didn’t get in an argument with a little girl.

The laziness of people on the subways is overwhelmingly annoying. There's garbage cans on every platform and people are THAT impatient that they can't wait and then i'm the one stuck brushing of Cheetos crumbs off the seats.

The eye-roll seems right to me, actually.
For one thing, it's a facial expression that will register immediately and intimately with an 8-year-old. For another, rather than saying "naughty!", it says "loser!". Which is much more effective.

Jon, two things you might want to try next time that I have used.

1. Kindly and politely say, "You dropped something." Often, if the person is walking I will pick up the item and hand it to them.

I try to do No. 2 in front of my daughter whenever we come across litter in our travels (within reason). It's the way I was raised and the way I'm raising her.

[5] You gotta be kiddin' me? Sure Tokyo is very clean, but I see people throw shit on the ground all the time. (Especially in your neck of the woods, bro).

What about the "parked bike basket dump"? Tokyo is the only place I've seen that dirty trick. For those of you who don't know, some one parks their bike on the street and their basket instantly become a trash receptacle, the longer it stays put the more trash goes in. It's a really thoughtless and disgusting habit, IMHO

Change of topics. I suppose you guys heard about this one. Cashman pulling a Letterman and stealing A-Rod's thunder before spring training.

Never a dull moment in YankeeLand.