My neighbor and I boarded the downtown A Train at rush hour one morning last week where I noticed a man drawing a portrait in a seat close to us. He was using bold strokes and working quickly.

The artist was a Black man, around forty years old by my guess, and he wore close-cropped facial hair and an army-green cap. His two front teeth appeared to be wrestling and the right tooth was winning.

My neighbor and I chatted for several stops and I didn’t give the artist another thought until I turned my head and saw that five or six people in our vicinity were holding portraits of themselves. The artist was reaching across the aisle to hand a fresh drawing to a stout, middle-aged Korean man who had his eyes closed.

The Korean man rejected the drawing without looking at it. Generally, this isn’t an insulting move. If you took every piece of paper that was handed to you in this city, you’d drown in the stuff. The artist explained, albeit with an edge, that he was handing him a drawing. The Korean man relented, though I still don’t think he understood what was going on.

And the Korean man’s instincts were at least partially on target. The artist was seeking tips. It was a clever, much more palatable (to me anyway) method of asking for cash on the subway, but it still put the recipient of the portrait on the spot. Some people gave the artist money for the drawing, some didn’t.

I leaned over to see the picture of the Korean man. It was a very good-not-great likeness, but when I considered that it was probably the seventh drawing the artist had done in less than thirty minutes, I bumped up the grade. He saw me looking and asked if I wanted a picture too.

I wanted to say yes, but we were slowing down to arrive at my stop, so I told him that there wasn’t time. He went to work on someone else. Then the train stopped and we waited for ten minutes poised right outside the 59th st stop.  He finished three more drawings in the ten-minute delay.

He didn’t come back to me, but he did catch my neighbor. Check it out. 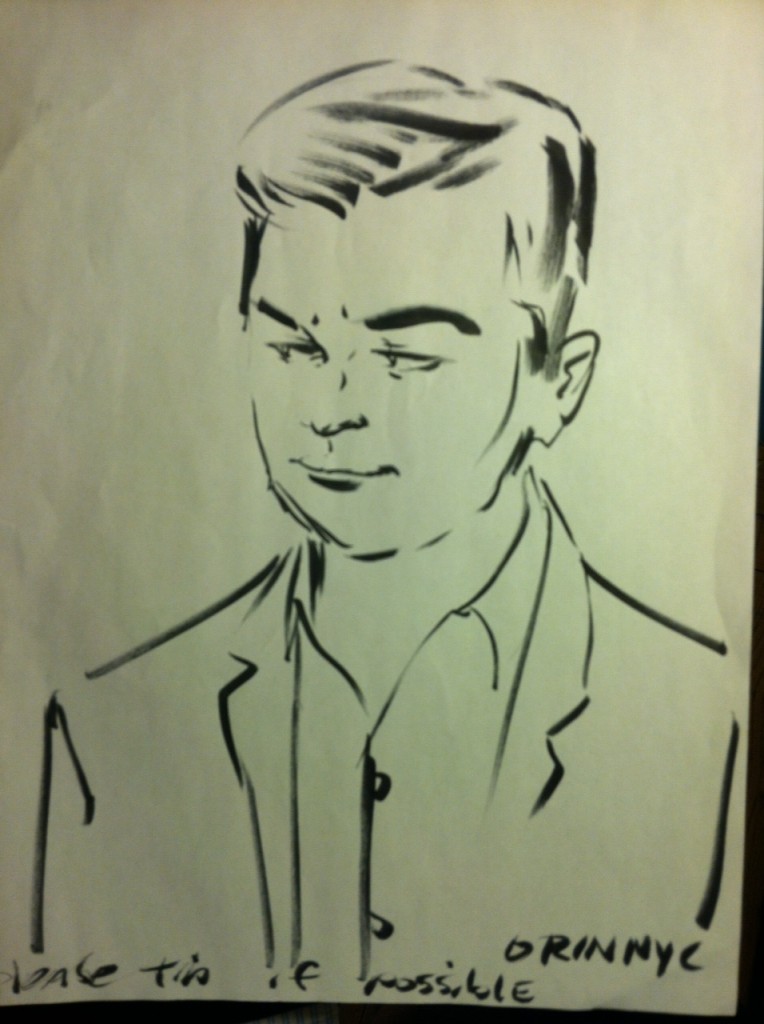 I found the artist on the internet. His name is Roderick Perry Anthony and he signs “Orin” on his artwork. This is a profile of him from 2006. He’s still (or back) on the subway in 2012, and whatever that means for his career at large, I admire his dedication to his art.