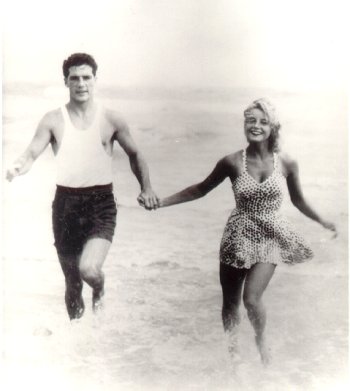 If you’ve never read “The Boxer and the Blonde” by Frank Deford, well, here’s a reminder. It’s a good one:

The boxer is going on 67, except in The Ring record book, where he is going on 68. But he has all his marbles; and he has his looks (except for the fighter’s mashed nose); and he has the blonde; and they have the same house, the one with the club cellar, that they bought in the summer of 1941. A great deal of this is about that bright ripe summer, the last one before the forlorn simplicity of a Depression was buried in the thick-braided rubble of blood and Spam. What a fight the boxer had that June! It might have been the best in the history of the ring. Certainly, it was the most dramatic, alltime, any way you look at it. The boxer lost, though. Probably he would have won, except for the blonde—whom he loved so much, and wanted so much to make proud of him. And later, it was the blonde’s old man, the boxer’s father-in-law (if you can believe this), who cost him a rematch for the heavyweight championship of the world. Those were some kind of times.

The boxer and the blonde laugh again, together, remembering how they fell in love. “Actually, you sort of forced me into it,” she says.

“I did you a favor,” he snaps back, smirking at his comeback. After a couple of belts, he has been known to confess that although he fought 21 times against world champions, he has never yet won a decision over the blonde—never yet, as they say in boxing, outpointed her. But you can sure see why he keeps on trying. He still has his looks? Hey, you should see her. The blonde is past 60 now, and she’s still cute as a button. Not merely beautiful, you understand, but schoolgirl cute, just like she was when the boxer first flirted with her down the Jersey shore. There is a picture of them on the wall. Pictures cover the walls of the club cellar. This particular picture was featured in a magazine, the boxer and the blonde running, hand in hand, out of the surf. Never in your life did you see two better-looking kids. She was Miss Ocean City, and Alfred Lunt called him “a Celtic god,” and Hollywood had a part for him that Errol Flynn himself wound up with after the boxer said no thanks and went back to Pittsburgh.

Tags:  billy conn  frank deford  the boxer and the blonde