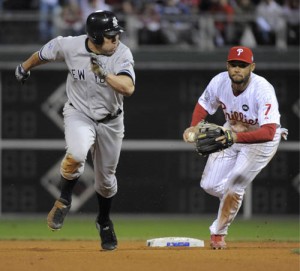 Lost amidst the concerns over the shoulder inflammation experienced by Michael Pineda, one of the most interesting stories of Yankee camp has involved the status of two outfielders who are at a crossroads in their careers. Justin Maxwell and Chris Dickerson are both capable of serving as fifth outfielders on a major league roster, but they are finding no room in a crowded and well-established outfield. The Yankees are set to open the new season with five outfielders, with three of the slots taken by starters Brett Gardner, Curtis Granderson, and Nick Swisher, and the other two going to DH platoon partners Andruw Jones and Raul Ibanez.

Unfortunately, the Yankees cannot send either Dickerson or Maxwell to Triple-A, at least not without passing through waivers. Both players are out of options, and both are likely to be claimed by another team if the Yankees try to sneak them through the waiver wire. So the Yankees may be forced to trade one or both of them, or risk losing them for nothing more than the waiver price.

Maxwell, in particular, has opened the eyes of the Yankee brass with his speed, range, and live bat. Like Dickerson, he can play all three outfield positions, which is important given the defensive limitations of Ibanez and the age of Jones. Mad Max might also be the fastest runner in the organization, making him a potential weapon as a pinch-runner. But he’s also 28 years of age, hardly the age of a true prospect, and coming off of major surgery to his throwing shoulder.

So what should the Yankees do? Perhaps the most sensible thing would be to chuck the obsession with a 12-man pitching staff and carry Maxwell as the sixth outfielder. But I just don’t think the Yankees are daring enough to try something different. If that’s indeed the case, then a trade would make the most sense. There are teams, such as the Mets, who are desperately in need of outfield help. With Andres Torres sidelined by leg problems and most of their alternatives better suited to backup or minor league duty, Maxwell could probably start in center field for the Mets right now. The Mets and Yankees hardly ever make trades, but the circumstances might be right for a current exchange, provided the Mets are willing to fork over a C-level prospect from the lower reaches of their minor league system…

The injury to Pineda will not only change the configuration of the starting rotation, but it will alter the dynamic of the bullpen. With a healthy Pineda, Freddy Garcia appeared to be the odd man out of the rotation and likely would have been ticketed for long man duty in the pen. Now that Garcia will be starting, the Yankees will have an opening for a long reliever. It figures to be one of three Triple-A prospects: D.J. Mitchell, David Phelps, and Adam Warren. Of the three, Warren throws the hardest, but Mitchell may be best suited to relief work because of his hard sinker.

Earl Weaver would certainly approve of the Yankees’ plan to use a pitching prospect in long relief. The former Orioles skipper was a big believer in breaking in his young pitchers in the relatively pressure-free role of long relief. If they succeeded out of the bullpen, Weaver would then challenge them further by pushing them into the rotation. Weaver certainly had a long record of success with young pitchers in Baltimore, from Jim Palmer and Dave McNally to Doyle Alexander and Ross Grimsley to Mike Flanagan and Scott McGregor.

The Yankees can only hope for similar success from either Mitchell, Phelps, or Warren.

After a poor start to the spring training season, Raul Ibanez has shown some life in a body that is closing in on 40. He has hit three home runs over the last week, while showing power to both left and right field. Even if Ibanez had continued to struggle in Grapefruit League play, he was never going to lose his job on the Opening Day roster. Still, the Yankees remain on red alert with regard to the DH position. If Ibanez struggles over the first couple of months of the season, do not be at all surprised if the Yankees cut bait with him and look very seriously at the possibility of signing Johnny Damon. Ibanez is coming off a subpar season in Philadelphia, and given his age, it shouldn’t be any shock if he turns out to be cooked as a major league hitter.

Of all the remaining unsigned free agents, Damon is the best available player. He still has sufficient power and speed to make him dangerous, even if he can’t play the outfield anymore. His OPS of .743 was significantly better than Ibanez’ mark of .707. And he did so without the benefit of having Citizens Bank Park as his home field.

So why hasn’t Damon found a job yet, with the regular season just days away? Damon has been hurt by two factors this off-season: he’s insistent on wanting an everyday DH role because of his pursuit of 3,000 hits, and he’s a Scott Boras client, which can be a discouraging factor to some potential suitors. If Damon were smart, he’d willingly sign as a platoon DH with the Yankees, if only because some playing time is better than no playing time. If Damon were to hit well enough, there’s always a possibility that the Yankees would expand his role and make him the regular DH, though he’d have to concede some DH time to Alex Rodriguez, Derek Jeter, and Nick Swisher. But by continuing to sit on the sidelines, Damon won’t be able to impress anybody.

Yankees aside, I hope that Damon signs with some major league club between now and May. Not only can the man still hit, but he brings an energy to the ballpark and to the clubhouse. He’s a fun player to watch. Without a doubt, Johnny Damon should play somewhere in 2012.

To lose two younger players who could potentially provide at least the same production and potentially stay healthy longer because... why? just gives me a headache. The Yanks seem to have a habit of painting themselves in a corner regarding signing aging vets to fill bench roles, then by the end of the season they've "discovered" a young guy capable of giving them a boost at critical moments. It reeks of stale thinking and fear of bucking convention. Is it a "veterany-ness" thing? Is Girardi going to go full-blown Queeg by the end of the season if young players outnumber veterans?

Actually, now that I think about it, Bobby Valentine is 99.44% more likely to pull a Capt. Queeg act by mid-season, so I take that last line back. But I still don't understand how Cashman and Girardi seemingly have a habit of compromising the bench on purpose.

Chyll, another young player, Cesar Cabral, lost out on a chance to make the roster because of a fracture in his elbow. He might be able to pitch later in the season, but for now, the 30-year-old Clay Rapada will likely be the second lefty in the bullpen.

Cashman hasn't been good at putting together a bench since the year 2000. He clearly places the emphasis on the starting lineup and the rotation, which is fine, but a good bench would also help in dealing with the inevitable injuries. Sadly, the bench is always an afterthought in the Bronx.

[1] My thoughts exactly. I call it VWS, or Veteran Worship Syndrome. The Boss had the worst case ever (and other notable sufferers include Sweet Lou), but the legacy lives on in decisions like this.

Just putting it out there that Chris Dickerson has cleared waivers and was sent to AAA back on February 27th. So holding on to him won't be a problem at all. As opposed to Maxwell.